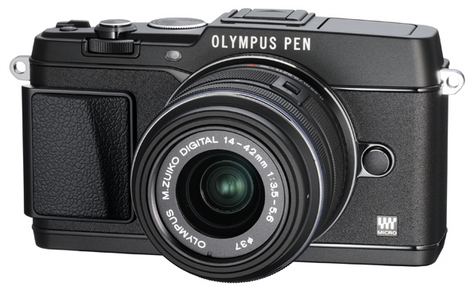 To mark the 50th Anniversary of the PEN F, Olympus launched the PEN E-P5. The new flagship in the company's growing series of Micro Four-Thirds cameras (as of 5/2013), the E-P5 boasts the world's first 1/8000th of a second shutter speed in the Compact System Camera class. It also features a 16-Megapixel TruePic VI Live MOS image sensor, a 3.0-inch Tilting Touch screen display (it tilts up 80-degrees and down 50-degrees), an in-body 5-Axis Image Stabilization system, and Full HD Video Recording.
In this price range, photographers expect professional and full-manual controls. The E-P5 delivers with its 2x2 Dial Control System; when shooting manually, the camera's front and back dials can adjust aperture and exposure time, or ISO value and white balance.
The E-P5 is also the first Olympus camera to include built-in Wi-Fi, which expands the digicam's functionality when used with the free Olympus Image Share 2.0 smartphone app. Particularly interesting here is the E-P5's ability to create its own Wi-Fi Network. The app also syncs the camera's display with your smartphone for remote shooting and self-portraits. You can also use your phone's built-in GPS to geo-tag your photo's metadata.
Creative Features include 12 Art Filters, an improved Live Bulb mode (used for long exposures of stars, fireworks, or light painting), as well as "Signature", which allows you to overlay a handwritten, or image-based, signature on your photos. Photo Story "enables you to capture a scene from multiple viewpoints and then combine them into a single image to create unique collages in camera", while "Photo Story +" takes things one step further by adding "a rich variety of stamps" alongside the above-mentioned Signature.
Olympus PEN E-P5 Features:
The Olympus' PEN E-P5 is available in two forms: 1) a $999.99 black, white, or silver body-only. 2) a $1449.99 black or silver body plus a black M.ZUIKO DIGITAL 17mm F1.8 and a VF-4 Electronic Viewfinder. Click on our buy button to see the most current online pricing.