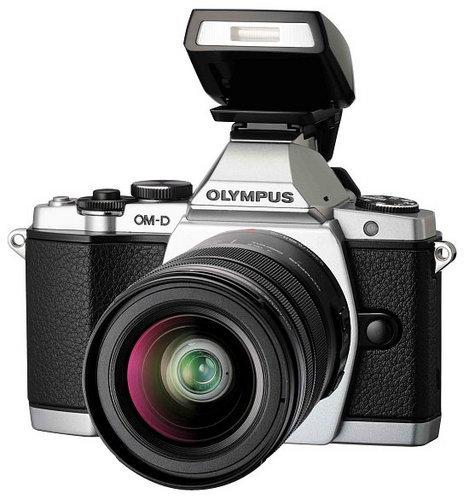 The OM returns with Olympus' first OM-D model; the E-M5. This sophisticated EVIL (Electronic Viewfinder Interchangeable Lens) camera is loaded with various features that we've come to love about their Digital PEN cameras. It utilizes the same Micro Four Thirds mount and sensor combination, and uses the same lenses.

However, Olympus has brought back accents of their popular OM film system from the 1970s (which held a 40 year legacy), and incorporated them with 2012 technologies. One of the biggest differences between the OM-D line and the Digital PEN line is the E-M5's built-in EVF. This unit has the same internal make-up as their VF-2 external EVF that would popular with their PEN cameras, built right into the frame of the camera. On top of this, the E-M5 boasts weatherproof sealing, which can resist a light rain or splashes of water, along with increased dust resistance. They've also incorporated a new 3.0 tilting OLED display, that also boasts touch screen functionality.

To top off some of the new additions, Olympus has implemented the World's first 5-axis image stabilization system, which not only compensates vertical and horizontal movements, but also corrects rotational movement and pitch and yaw. This new system helps with shooting with longer telephoto lenses and at slower shutter speeds, not to mention it also helps tremendously when shooting hand held video. One of my personal favorites about this new OM-D system is the optional vertical grip options (the HLD-6G and HLD-6P). You have the choice of using the vertical grip itself without the extra battery compartment and bulk, or you can strap on both units to get an even beefier grip, and the ability to use two battery packs for double the power.

For those who love Olympus' Art Filters, the E-M5 offers even more flexibility with the available art filters, along with increased "stacking" capabilities. They've even added some new filters to the bunch; like Pin Hole camera and Key Line.

We just got a taste of this new OM-D model for a day over the past few weeks, and we very impressed with the quality thus far. This was a pre-production model with no battery. So, we can only comment on the camera's look and feel at this point.

Olympus OM-D E-M5 Key Features Include:
The OM-D E-M5 is scheduled to start shipping in April, 2012. The available kit combinations are as follows:
Additional Product Views