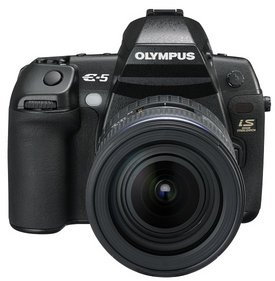 Because the E-5 is built to be used by professionals, Olympus has constructed this camera with a rugged magnesium-alloy chassis, along with making the body itself both moisture and dust resistant (it can not be submerged underwater without some sort of optional housing). This will help ensure the E-5 will stand up to the environments that many pros encounter, and it's sure to stand up to the test of time. The control layout is very similar to the E-3's. so if you are upgrading you'll feel right at home. The controls that were located along the bottom of the LCD have been moved to other locations on the back of the body (some are gone altogether), mainly to accommodate the larger display. Overall I found using the camera was a pleasure, and my only real grip was with the mode selection setup. Most dSLRs on the planet offer a mode dial that allows you to quickly and easily rotate it to change the exposure mode. The E-5 uses a button in conjunction with the rear control dial or 4-way controller. While I can see where this setup would be preferred (less chance of accidental changes), I found it was rather slow when wanting to quickly change the exposure mode after firing a photo; it seemed the camera had to wait to process the photo before allowing me to change from Program to Aperture priority mode. I don't foresee this being an issue with most photogs, however someone like myself would understand the frustration when trying to quickly capture the same subject using different exposure modes.

Being that the E-5 is a high-end dSLR, you won't find too many "Scene" modes on the camera; there's not even an Auto mode. However, it's built this way for a reason; this is a PRO camera. You have access to the usual Program AE, Aperture priority, Shutter priority and Manual exposure modes. This will allow even novice users to start using the E-5 to capture great snapshots, and continue down the path of learning with as much or as little control over the exposure process as they feel comfortable with. While I said there were no scene modes, Olympus still incorporated their ever so popular Art filters. Under the Picture Mode menu setting you have access to various style modes (Vivid, Natural, Muted, Portrait, Monotone, Custom) as well as ten Art filters (Pop Art, Soft Focus, Plae&Light color, Light tone, Grainy Film, Pin Hole, Diorama, Cross Process, Gentle Sepia and Dramatic Tone). All of these options combined will allow any photographer, regardless of their photographic knowledge, to explore their more creative side.

Viewing stored photos and video, accessing the menu system, and using Live View mode are all handled by an impressive 3.0-inch display. I found the E-5's LCD to be of very high quality, offering 920,000 pixels of resolution and a smudge and glare resistant coating. This allowed me to use the display in various lighting without any difficulty, and though there are still a few angles which reflect bright light, the LCD's back light is nice an bright so you can see what's being displayed just fine. This unit also offers 270 degrees of rotation, which gives you a great deal of extra versatility over your typical fixed LCD which are featured on most dSLRs. Whether you're shooting over a crowd, or capturing a macro shot at waist level, you'll be able to comfortably frame your subject(s) without having to put your body in some weird or uncomfortable position. If you need to quickly view camera settings on the fly, you can either call up the Super Control Panel on the LCD by pressing the INFO button, or use the E-5's monochrome Control Panel LCD on top of the camera. Both displays offer a wealth of information, and the top LCD can be illuminated by depressing the Light button. The Super Control Panel also acts as a function shortcut menu, allowing you to quickly change camera settings without entering the main menu system. Like past Olympus E-series models, the E-5's menu system is simple and starlight forward. Pressing the MENU button on the back of the camera gives you access to five menus, two for record mode, one for playback, custom functions, and finally the setup menu. All the settings are in a familiar order if you've owned an Olympus dSLR in the past, and are logically organized so new users will have no problem finding the settings they are after.

Shooting performance from the E-5 was similar to the E-3 (no real improvements, however the E-3 was no slouch). From power-on till the first image was captured measured about 9/10 of second , while waking the camera from sleep mode to first image capture measured approx. 6/10 of a second. Shutter lag, the delay between depressing the shutter and capturing the image, was almost instantaneous at less than 1/10 of a second when pre-focused, and anywhere from less than 1/10 of a second to 4/10 second including autofocus time, depending on the amount of focus change require by the lens. Shot-to-shot delay averaged 3/10 of a second, and using the internal flash the shot to shot interval was about 7/10 of a second. You have two continuous shooting modes to choose from; Sequential L and H. Sequential L mode captured images at a rate of 3.3fps (20 images in 6 seconds) with no signs of slowing due to a full buffer. High mode was able to capture 30 shots in 66 seconds (5fps), again with no buffer slow down. Switching to RAW format using Continuous L mode I was able to capture 29 images in 8.7 seconds (3.3fps), and in Continuous H mode 20 images in 3.9 seconds (5.1fps), and after about 22 frames I noticed a slight slow down from the buffer filling where the frame rate dropped to about 4.8 fps. The above times were observed using a SanDisk Extreme Pro (UDMA 6, 90MB/s) 16GB CF2 card, Zuiko Digital ED 12-60mm (24-120mm) 1:2.8-4.0 SWD lens, Program mode, ISO Auto, flash off, Large/Fine image quality and all other settings at factory defaults, unless noted otherwise. Times will vary depending on lighting conditions, media used, camera settings, etc. I will note that when using a slower Kingston Elite Pro (133X) 16GB CF2 card, the frame depth dropped significantly due to the camera not being able to write to the card fast enough; we highly recommend using the fastest media possible when wanting to use the E-5's high-speed capabilities.

When reviewing our standard test subjects, I was very pleased with the image quality results from the E-5 using a Zuiko Digital ED 12-60mm (24-120mm) 1:2.8-4.0 SWD lens. Images are crisp, with excellent exposure and beautiful fine details. Colors are also very "life-like" when using the Natural Picture Mode setting. This is no real surprise, as we have seen similar results from the E-PL1 which shares the same Live MOS sensor. Weather indoors or out, the E-5 aims to please. Using Program mode with the ISO set to Auto, the camera did a fantastic job in various situations, including when shooting a recent wedding. I setup my lovely assistant with the E-5 kit we tested, along with a FL-50R external flash unit. The Program exposure mode was able to produce some very nice results in difficult shooting environments (low light), and was able to focus quite well when you consider the conditions the camera was being used in.

Noise levels were right in line with our expectations. Because the E-5 shares its sensor with very popular E-PL1, we anticipated that the E-5 would produce similar results. Our M&M man ISO series shows that the E-5 handles noise quite well from ISO 100 - 800. At ISO 1600 you start to see a good amount of Luminance noise, however the levels are still very acceptable and I would have no problem making larger prints with these images. Once you hit ISO 3200, you'll notice a very slight color shift from the heavy NR going on in-camera. Once you reach ISO 6400, you see a very noticeable shift in color, not to mention a great deal of noise all over the image. The standard noise reduction setting works well, however I actually preferred the high setting when it came to using ISO 1600 and 3200. In my opinion, the usable range of the E-5 runs up to ISO 3200. The 6400 setting is not something I recommend using.

Like most all dSLRs on the market today, the E-5 offers a HD video capture option. While many still don't feel video belongs on a dSLR camera, I believe it's a great feature. During our most recent wedding, during the reception my lovely assistant setup the E-5 on our tripod to record video as backup to my photos. Due to her inexperience, the focus was not spot on, however it's still nice having the video to pass on to the Bride and Groom. While not as robust as the video mode on some of Canon's dSLRs, the E-5's 720p (1280x720) movie mode was able to produce some nice clean video, even in the very dimly lit reception hall we were recording in. Again, the focus is not spot on due to operator error, however you can see that the camera is able to produce high-quality HD video. The camera's built-in mono microphone produced pretty typical sound. You get a great deal of background noise, which is something we see on most built-in units. Luckily, the E-5 does offer a mic port for using an external microphone, which will allow you to capture some very high-quality audio. Videos are saved in Motion JPEG (.AVI) format.

Battery life using the E-5 was very appealing. We were able to capture over 700 still photos, record about 20 video clips (most of which were over 2-3 minutes long), and conclude all of our other tests before the battery was exhausted. This goes right in line with Olympus's claim that the E-5 can capture up to 870 shots on a single charge when using the BLM-5 Li-ion battery. The manual also notes that you Can use the BLM-1 Li-ion pack that was supplied with the E-3, however they also warn that you must use the charger that was supplied with the BLM-1 to charge that pack (do not use the charger that came with the E-5).

Bottom line - overall, we truly enjoyed using the E-5. This is a very capable camera that is sure to please those who demand the performance and versatility that we expect from mid to high-end dSLR models. The added dust and water resistance offered by the E-5 only sweetens the deal. My only real grips with the E-5 were the slower transition from one exposure mode to another right after an image is captured, some of the annoying background noise that was picked up by the built-in microphone, and the pretty much unusable ISO 6400 setting. That said, with a MSRP of $1699.99 US, the E-5 is competitively priced for a camera in this category. Be sure to check out our unedited sample photos to judge the E-5's image quality for yourself.