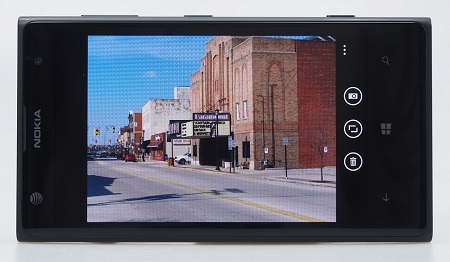 The Nokia Lumia 1020's display screen measures 4.5 inches diagonally and occupies most of the front panel of the smartphone unit. However this unit is not a full HD resolution screen, offering 1280x768 WXGA resolution instead, which places it a bit behind some other high-end smartphones currently on the market.
It's a 15:9 aspect ratio screen, which unfortunately means your HD videos won't occupy the entire screen. And it offers a pixel density of 334 ppi, which is a bit below other high-end smartphone displays.
The screen is bright, offering a wide viewing angle. And it combats glare when you're using it outdoors in sunlight. Images look bright and colorful on the Lumia 1020's screen, as it uses 24-bit true colors in the display.
Above the screen (shown here on the left of this photo) you can see the front-facing camera lens in the upper left corner of the photo.
Below the screen are three control buttons, the Back, Start, and Search buttons. These buttons are back lit in certain usage modes for the smartphone, making them easier to see.
The back of the Lumia 1020 looks a bit like a point-n-shoot digital camera with a raised area near the smartphone camera's lens, almost creating a lens housing. Including the raised area of the smartphone body, the Nokia Lumia 1020 measures about 0.41 inches in thickness, so the raised area doesn't make this device significantly thicker than other smartphones. The Lumia 1020's dimensions are 2.81 by 5.13 inches.
The two dots visible on the left side of this screen are wireless charging connectors.
You can see the Nokia Lumia 1020's f/2.2-aperture lens on the right side of this photo, just to the right of the "Nokia" label. The Zeiss lens offers an equivalent focal length of 26mm, and optical image stabilization is built into the device's camera.
Nokia unquestionably included the most impressive image sensor found in a smartphone camera to date, with a 1/1.5-inch image sensor that offers up to 41-megapixels of resolution. It can shoot at ISOs up to 3200.
Just above the lens is the Xenon flash unit, which has an operating range up to about 12 feet.

The top panel of the Lumia 1020 features a SIM compartment on the left and a 3.5mm headphone jack.
You can open the SIM tray either using the SIM tray key pictured here or the end of an unwound paper clip.

On the bottom panel of the device you'll find a speaker grill as well as a USB port for charging the device or for connecting it to your computer to upload photos and videos. Making a computer connection is a good idea for uploading your high-resolution images, because they will take a long time to upload over a wireless connection.

On the far edge of the bottom panel is a dual hole through which you can attach a wrist strap.

When holding the Nokia Lumia 1020 and looking at the touchscreen, you'll have a series of buttons on the right side panel of the smartphone. The button at the top of the panel (shown here on the left) is the volume control button. Just below it is the power button, while at the far right of this photo is a dedicated shutter button, which will help you operate the Lumia 1020's camera a bit more like a digital camera.

The Lumia 1020 is a Windows OS phone, and you'll easily notice this when you see the design of the home screen, with its various boxes leading to apps and features.
To access the unit's camera from the Home screen, touch the purple box, labeled Nokia Pro Cam.


In Nokia Pro Cam mode you'll see a variety of on-screen buttons to control the smartphone camera's performance and settings. In the upper left corner of the image above, you'll see a couple of buttons that allow you to access the Lumia 1020's Playback mode where you can access previously recorded images.
Along the right side of the screen are the menu icon (three vertical dots), the shutter button (circle around a camera icon), and the lens mode icon (opposite pointing arrows), which we'll discuss later.
To switch from still image recording to video recording, touch the tiny video camera icon on the right side of the screen.
When shooting with the Nokia Lumia 1020's Pro Cam setting, you can gain access to a few different camera settings, which are listed as icons across the top of the screen. As you touch the different icons, you'll see a virtual dial appear on the far right of the screen. Use your finger to drag the circle around the dial to make a change to the various settings.
The settings icons from left to right are:

When you touch the button with the opposite facing arrows on the main shooting screen, you can change the type of photography you're performing with the Lumia 1020 by switching out of Nokia Pro Cam mode and into what Nokia calls a different "lens mode," which is essentially another camera mode that offers some special effects.
You then can select the lens mode you want to use from the boxes on the popup screen. Your options are:
When you later again access the lens mode screen from a new lens mode, Nokia Pro Cam should appear in one of the boxes.

From Nokia Pro Cam mode, you can gain access to the menu from the shooting screen by touching the three vertically aligned dots in the upper right corner. The settings under the menu are:

When you select Settings from the Nokia Pro Cam menu, you can make changes to settings for Pictures or Videos. Just touch the word of the mode for the settings you want to change. The Pictures menu includes:
With a Tutorial topic on the screen, just touch anywhere to see more information on that topic. Drag your finger across the screen to see the next Tutorial topic. Some of the Tutorial topics will require that you make a connection to the Internet.

Recording video with the Lumia 1020 is a simple process, as you won't have access to the advanced types of settings that you'll have when shooting still images.
Touch the video camera button on the screen to begin recording video. The amount of time that has elapsed in the recording will appear on the screen. Touch the button again (which has now turned blue) to stop the recording.
When recording videos with the Nokia Lumia 1020 and then downloading them to my computer, I found that horizontal videos would sometimes download upside down to my computer, and it seemed to be a random process. The orientation of the scene when recording didn't seem to matter when the video was downloaded. Some videos just downloaded in an upside down orientation, which was very odd.
The computer icon with a circle at the top of the screen opens Playback mode. The menu icon and lens mode buttons are the same in video mode as they are in still image mode. To return to still image mode, just touch the small camera icon.
The settings you can change in video mode are listed along the right side of the screen in this image, and they include:

To access the Playback mode with the Lumia 1020, return to the Home screen for the smartphone device. Scroll down until you see the Camera Roll box or the Photos box and touch it to open the Playback mode.

Through the Camera Roll you can make selections on multiple photos at a time, including marking photos as a favorite, deleting, or sharing through social networking.

Through Albums you can sort your photos in a variety of ways.

Through Date you'll see the images sorted by the month in which they were shot.

Through Favorites you'll only see the photos you've tagged as favorites.

To see details and editing options regarding your stored images, just touch the Menu icon (three vertically aligned dots) with a single image or video displayed on the screen. The menu options in Playback mode are:
After touching Edit on the menu screen, you'll then want to touch Crop, Rotate, Auto-Fix to gain access to the unit's primary editing options.
On the editing screen touch the Auto-Fix button (marked with a magic wand icon) to allow the Nokia Lumia 1020 to make changes to the image automatically.

Touch the Crop button from the main editing screen to crop the image currently displayed on the screen. When you see the 3x3 grid with blue corners on the screen.you can drag any of the blue corners to adjust the crop. The portion of the photo that will be discarded after the crop will be in shadow. Then touch the check mark icon to save the image as cropped.

If you touch the the square icon below the check mark, you can crop the current image by changing its aspect ratio. Once you've picked a new aspect ratio you again can drag the blue corners to change the crop.

If you touch Creative Studio after selecting Edit from the menu, you can apply special effects to your stored images. The smartphone camera's special effect choices are:
Touch the type of effect you want to apply and then touch the Save icon.

Playing back videos on the Nokia Lumia 1020 is easy. With a video on the screen, just touch the Play icon to begin playing back the video. You can choose to reverse, pause, or fast forward while the video is playing.

The Nokia Lumia 1020 compared in size to a DVD.