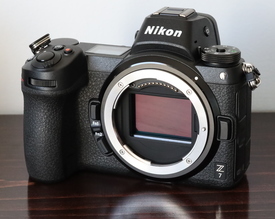 What We Love. The Nikon Z7 distills (almost) everything we love about the D850 DSLR into a smaller-yet-still-ergonomic body featuring the brand new 55mm Z-mount, 5-axis vibration reduction, and Nikon's best video autofocus ever. With weather sealing and a dynamic image sensor, you can take the Z7 anywhere and effortlessly manipulate images in post. Featuring 10-bit external 4K video recording & improved 120fps Full HD video recording capabilities, you can create a cinematic masterpiece as easily as you can shoot portraits and landscapes. And the optional FTZ Mount Adapter seamlessly integrates and/or improves over a hundred F-mount lenses.
What We'd Change. Everyone's talking about the missing dual card slots -- unexpected at this price point, to be sure -- but we'd argue the Z7's main failings are found in the still-photo autofocus as well as pricing. TLDR, we miss the 3D tracking system from the D850, D500, and D5, which makes the Z7 camera less capable for sports & wildlife photography. The Z7's AF also struggles in ultra-low lighting (emphasis on ultra) or when tracking multiple moving subjects (to be fair, most cameras do). We'd also wish the camera was one finger-width taller for improved ergonomics. Lastly, the $3,400 launch MSRP seems a touch high, especially when you consider the competition and how the price jumps to $3,550 if you buy the FTZ adapter too.
The Bottom Line. The Nikon Z7 is an admirable first generation product that blends a century of technological advancements with a system looking at photography's next hundred years. Unless you need dual card slots or shoot action, the Z7 is a terrific hybrid option for those who want to make video content and capture high-resolution still images. It's small and quiet and compact and light, yet durable and flexible and with more features than any other camera in Nikon's history.
Pick This Up If... you're a Nikon shooter looking to do more video, in the market for a durable mirrorless camera system that shoots full-frame 4K video, or if you were contemplating the Nikon D850, but held off because of its size/weight or video AF limitations.