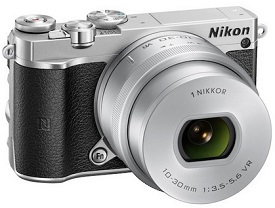 After seeing a list of the design improvements Nikon made in the Nikon 1 J5 versus its previous entry-level mirrorless interchangeable lens cameras (ILCs), like the J4 and S2, I was looking forward to having a chance to test the J5.

What I found was a good-looking small mirrorless model that does have some nice advancements versus its predecessors. However, the Nikon 1 J5 also has enough quirks and annoyances that it's far from a perfect mirrorless model.

Ultimately, the biggest problem for the J5 with the entry-level kit lens is slightly soft photos. While this doesn't really affect the image quality you will see at small and medium sizes, it's tough to make sharp large prints with the J5 with the most basic kit lens attached (my J5 test kit included only the 10-30mm interchangeable lens). Having said that, it's possible that you may have better success with sharper image quality by using a different lens designed for the Nikon 1 series.

Nikon increased the amount of resolution found in the J5 versus the manufacturer's older entry-level mirrorless cameras, now offering 20.8-megapixels of resolution in a 1-inch CX-format image sensor, so this camera has plenty of resolution to create great-looking images.

And you can create full resolution images at impressive speeds, as the J5 can record 20 frames per second with autofocus enabled throughout. You also can shoot at a speed of 60 fps, but you're limited to recording 20 images at a time. The various burst modes in the Nikon 1 J5 are very impressive.

You will be able to fully control the camera's settings through any of the advanced-control shooting modes, allowing you to dial in just the right look. Advanced photographers also may want to make use of the Nikon 1 J5's manual focus feature, which is a little awkward to use with this camera and kit lens, because you'll have to use command dials on the camera, rather than a focus ring on the lens.

Low light results are pretty good with the J5, because the camera doesn't produce much noise until you reach an ISO setting of 3200. It would have been nice if Nikon had given the J5 a hot shoe to add an external flash unit, but the popup flash does an adequate job with most types of low light images.

For those making the migration from a point-n-shoot model to this more advanced camera, Nikon gave the J5 plenty of automatic control features to help ease the transition. You'll be able to shoot with the camera as much as you want in the auto modes and still achieve good results, while learning how to make use of the manual control features at your own pace.

Less experienced photographers will appreciate the touch screen LCD on the Nikon 1 J5, which makes it easier to use the camera and change settings. The LCD offers a sharp display with more than 1 million pixels of resolution.

Nikon gave the J5 a tiltable LCD screen, too, as it can tilt up to 180 degrees for selfies. The tilt will help combat any problems you may encounter with glare while using the J5 in direct sunlight. Because the LCD screen seems to collect fingerprints quite easily, glare can be a problem, and the J5 has no option for adding a viewfinder. The LCD screen stretches to the edges of the camera body, making it tough to grab the camera without leaving a few fingerprints on the screen glass.

You'll want to use the touch screen when making use of the Feature grid that Nikon offers as the primary method of changing settings with the Nikon 1 J5. While this grid is a nice feature, it takes too many steps and button presses to make changes to some settings.

This slightly awkward camera interface isn't the only area where the Nikon 1 J5 has some delays in operation, which may make you miss a spontaneous photo from time to time. The J5 just seems sluggish in a variety of areas ... other than with the aforementioned burst mode. (And even burst mode has an odd limitation associated with it that I'll mention later.)

When you twist the mode dial, the camera places an explanation on the screen, which is nice, but it also locks up the camera for a couple of seconds. You can shoot a photo while the explanation is on the screen, but it will block your view of the scene, which can affect composition. Changing exposure and other shooting settings also causes a sluggish response in the J5.

If you make use of image review -- where the previous photo is displayed on the screen for a short period of time -- you can expect shot to shot delays of 4 to 5 seconds. Shot to shot delays are less than 1 second when the image review is off. Again, you can press the shutter button to halt the image review early, but this will become annoying after a while. It would have been nice if Nikon had given photographers an option to reduce the amount of review time.

Finally, it can be time consuming to use the J5's menus. The Nikon designers changed the menu listings from shooting mode to shooting mode, meaning it can be difficult to remember exactly where the command you want to use is located, forcing you to spend time looking for it.

To speed operation, Nikon did give the J5 a new feature -- a Function button -- where you can assign a setting that you use quite often. The Fn button is located on the front of the camera near the natural location of your right-hand ring finger, making it easy to press when you're in a hurry.

In fact most of the J5's buttons are well-placed and are of a good size, especially for such a small mirrorless ILC. Additionally, Nikon gave the J5 two command dials, which is a great design feature for moving through stored images and menu options quickly.

Unfortunately, because the J5 is so small, I often found myself pressing the Fn button inadvertently while picking up the camera or just adjusting its position in my hands. I also pressed the shutter button accidentally multiple times and left fingerprints on the LCD constantly.

Nikon did give the J5 a nice-sized thumbpad on the back of the camera and a thin raised handgrip on the front of the camera to make operating this model more comfortable than with its J4 predecessor.

If you enjoy using special effect modes, Nikon has you covered with the J5. You can shoot with several special effects in the automatic Creative Mode.

And if you like shooting movies, you'll appreciate the Nikon 1 J5's various options. Not only can you shoot full HD movies, but Nikon allows you to record what it calls 4K movies (it's actually Ultra HD resolution), as well as making use of a few different movie special effect modes, something that isn't found on many cameras. Unfortunately, you are limited to shooting at 15 frames per second when recording the 4K movies.

Nikon gave the J5 a pleasing design that's another upgrade from the J4, providing more of a retro look. It's a two-toned design with black or white faux leather coating on the camera (slightly improving the grip) and a black or silver trim across the top and back. Lenses are available in black or silver.

Finally, I have to mention a couple of performance quirks I encountered while using the Nikon 1 J5 test model.

First, I experienced a couple of heat-related error messages while testing the model. While shooting a couple dozen flash photos in a couple of minutes, I received a "flash too hot" error message, and the camera locked up until the message blinked off the screen after several seconds. I encountered this message a few additional times while continuing to use the flash, until choosing to turn off the flash for several minutes.

The other heat-related message occurred after using the camera indoors and outdoors on an extremely hot day for about 40 minutes continuously. I received a "international temperature too hot" error message, and the J5 automatically powered down. The area around the battery compartment felt abnormally hot to the touch about five minutes before I saw the error message. This error repeated itself after 15 minutes of having the camera powered down, followed by another about 15 minutes of continuous use.

I also had a problem with the J5's burst shot mode. The advanced continuous shot modes allow for 20 fps, 30 fps, or 60 fps at full resolution. However, each mode is limited to shooting up to 20 frames at a time. The first time I would use the continuous shot mode, it would fire the full 20 frames. However, if I tried to use the mode again a few seconds later, the camera only would record anywhere from 5 to 15 photos. This was a problem that repeated several times. I finally determined I had to wait more than 30 seconds between using the advanced continuous shot modes to record the full 20 frames the second time.

Such problems used to be more common on digital cameras several years ago, but these performance issues and heat-related error messages aren't something I would expect to encounter on a modern model in this price range. It is possible that these glitches were related to the particular camera I was testing, meaning they're not related to the design of the J5 as a whole, but I wanted to make mention of them.

Bottom Line - If you read through the entire review listed above, you might think that I didn't like the Nikon 1 J5 very much. That's not quite the case: The J5 has some nice features and is comfortable to use versus other mirrorless ILCs. However, it also has quite a few issues that will cause frustrations for photographers. Nikon gave the J5 some design improvements versus its predecessor, but it's still so small that you'll press buttons inadvertently while picking up the camera. The J5 has a nice collection of advanced and automatic shooting modes, it has numerous movie recording options, and its touch screen is a nice feature. However, the overheating problems I experienced, the awkward operating interface in some areas, and the limit of recording 4K video at 15 fps are extremely frustrating aspects of this model. Outside of a very fast full resolution burst mode, the Nikon 1 J5 works sluggishly in a variety of shooting situations, especially when changing camera settings. Ultimately though, the image quality I was able to achieve with the J5 and its basic kit lens was a little soft. To achieve better results you're probably going to need to purchase a higher-quality second lens, which will drive up the price of this model. Throw in a second battery to combat the J5's below average battery performance, and the most basic price for using this model goes up significantly. At an MSRP of about $500 for the J5 and basic kit lens, this is a good camera. At a more realistic price point of $750 or $800 with the extra equipment that you'll almost certainly want, it's an average camera at best. However if you already like the Nikon 1 J4 or S2, you'll greatly appreciate the upgrades Nikon gave the J5, and you'll want to strongly consider the new model.