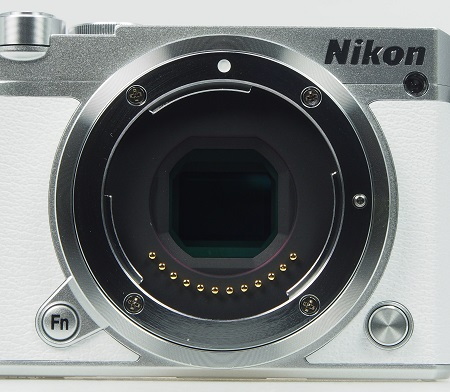 Along the left side of the Nikon 1 J5 (as you're holding the camera), the flash button is at the top of the panel.
A flexible hinged covering protects the camera's HDMI (top) and USB (bottom) ports.

The battery and memory card compartment are on the bottom of the Nikon J5. The J5, J4, and S2 all make use of microSD sized memory cards, which is not common in digital cameras. I prefer SD sized memory cards in cameras, just because they're bigger -- and less likely to be inadvertently lost -- and because photographers are more likely to have SD sized memory cards on hand already that they can share between cameras..
Nikon included a separate battery charger with this camera, which makes it convenient to purchase a second battery and charge one while using the other one.
Nikon kept the battery pretty small with the J5, helping to keep the camera's weight low. Of course the trade-off is battery life. Nikon rates the J5's battery at 250 shots per charge, and my tests showed a number closer to 220 images per charge.
I also have to mention one odd situation with the Nikon 1 J5's battery. During one of my tests, after about 40 minutes of continuous use, I received an error message that the camera's internal temperature was too high and the camera would be shutting down. After letting the camera cool for about 15 minutes, I began using it again. And after another 15 minutes of continuous usage, I received the error message again, and the camera shut itself down.
Several minutes before receiving the first error message, I touched the camera near the battery compartment and remember thinking that it felt much hotter than I expected. To be fair, I was testing the J5 outdoors for about two-thirds of that 40 minutes on an extremely hot day with heat index temperatures above 100 degrees. Still, this was a very frustrating problem to run into with a camera in this price range. Overheating problems with digital cameras were more common several years ago, but I have not run into this type of error message on any camera in a long time.