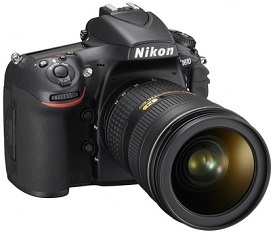 The Nikon D810 is an impressive looking advanced DSLR camera with a wide variety of dials, switches, and buttons that give photographers many manual control settings. You also can customize many of the buttons to meet your personal usage needs, giving you access to the settings that you use most often. It's an impressive camera ... and that's before you see the D810's image quality.
The D810 matches Nikon's highest resolution camera at 36.3-megapixels, and its FX-format CMOS image sensor creates outstanding images in nearly all types of scenes. And with 36-megapixels of resolution, you can crop the photos quite a bit to improve your composition while still maintaining a high-resolution image of 15MP or 25MP. This is a great feature.
Its performance speeds are strong, thanks to the EXPEED 4 image processing engine and a greatly increased amount of buffer memory versus its predecessor, the Nikon D800. The autofocus mechanism is outstanding, working well even in low light, but you also have the option of using manual focus.
Simply put, the Nikon D810 is a model that has lived up to its hype as one of the best DSLR cameras currently available.
That doesn't mean the D810 is perfect. The high manufacturer's starting price of around $3,000 for the camera body alone will drive this model beyond the means of quite a few photographers.
This model is very well built, but it's a heavy camera that's not going to be comfortable to carry outside of a camera bag for a full day of photography, whether you're carrying it by hand or via the neck strap. If you aren't using proper shooting techniques, the camera's weight can make it tough to hand hold the camera steady in certain low light situations without some camera shake.
And the Nikon D810 doesn't necessarily offer a significant number of obvious improvements over what is found with the D800. Depending on the way they plan to use the camera, owners of the D800 may not find enough bells and whistles with the D810 to cause them to feel like an upgrade is required. Owners of older Nikon DSLR models are more likely potential purchasers of the D810.
Another issue that may frustrate some photographers with the Nikon D810 is that the storage space required for each photo file is very large. Individual JPEG images require an average of 20MB to 30MB, RAW images require storage space in a range of about 50MB to 75MB, and TIFF images require 100MB, 125MB, or more of storage space. You'll burn up free space on the memory card in a hurry with this camera.
Then again, when the images look as great as the Nikon D810's images look, you might be willing to sacrifice some storage space.

Not only does the D810 create brilliant photos, but it does so in a variety of shooting conditions. This DSLR camera is equally at home when used in a museum as it is when used at a sporting event. Its versatility is impressive, allowing it to shoot great photos almost anywhere.
The D810's 5 frames per second maximum burst speed isn't quite what a professional sports photographer would like, but it works well for shooting photos at most events where professional-level results aren't required. You can gain a little more shooting speed by switching to the DX image sensor crop format, rather than shooting at full FX.
Low light results are extremely strong too with the Nikon D810, You can make use of the really good built-in popup flash unit, or you can add an external flash to the camera's hot shoe. The popup flash works over a distance up to 39 feet when shooting at ISO 100. The D810's performance at increased ISO settings is very good with minimal noise until you reach the highest ISO settings the camera offers, such as ISO 12,800 and then into the extended ISO range.