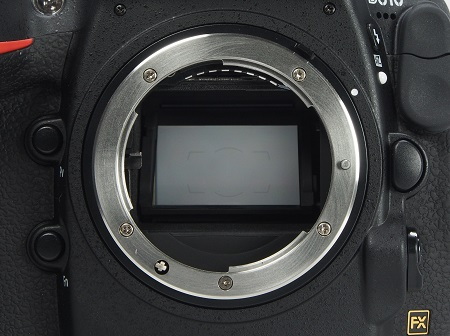 As you're holding the D810 and using it, the camera's ports will be near your left hand. Each port is protected by a flexible plastic hinged cover, which snaps in place. The ports are:
The memory card slots are included on the right-hand side of the D810, as you're holding the camera. The memory card compartment cover consists of a hard plastic and is hinged. You slide the plastic compartment backward to open it on the hinge. It locks in place when you slide it forward again.
By placing the memory card compartments on the side of the camera, it's easier to access them when the camera is attached to a tripod.
Nikon included two memory card slots with the D810, a smaller SD memory card slot and a larger CF memory card slot.
The battery compartment for the Nikon D810 is on the bottom panel of the camera. The battery fits inside the right-hand grip of the camera. The battery compartment door is a hard plastic and contains a hinge. You must slide a toggle switch to unlock the door and open it.
Nikon included a separate battery charger with this camera kit, and it's the only way to charge the battery. It cannot be charged inside the camera.
The battery power with the D810 is very good, especially if you primarily shoot in viewfinder mode. Nikon's estimates place the battery life as high as 1,200 shots per charge, which my tests showed is a bit high, but I also shot plenty of photos in Live View mode, reviewed the photos on the LCD screen, and made changes to the on-screen menus, which I believe is a more realistic usage scenario. Under these usage circumstances, my tests showed battery life was more in the 800-1,000 shots per charge range.