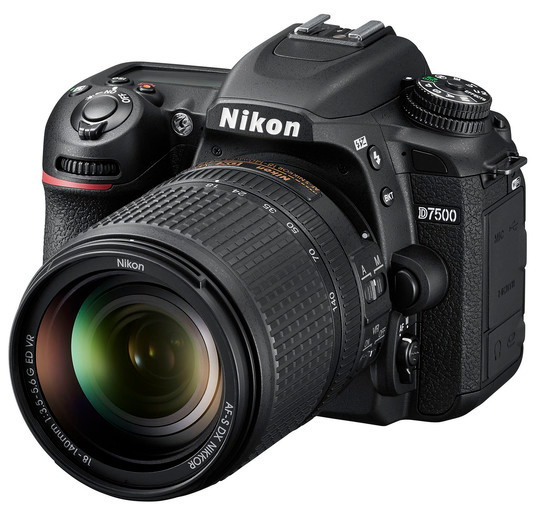 When looking at and testing a new camera, reviewers often subconsciously compare the new model to a previous camera from the same manufacturer. When I was holding and testing the Nikon D7500 recently, I kept thinking back to the Nikon D500. And that's one of the nicest compliments I can give the D7500.
It's definitely smaller than the D500 and not quite as powerful. But the D7500 has a significantly lower price point too, making it a very strong intermediate-level DSLR.
In fact, the D7500 has quite a few of the same components as the D500, making the D7500 a great value. Both cameras offer 20.9 megapixels of resolution with an APS-C sized image sensor, the same EXPEED 5 image processor, the same ISO range of 100 to 51,200 (expandable to 1,640,000), the same size of tiltable LCD screen, and the same maximum 4K video resolution.
LENSES USED
Nikon shipped the 18-140mm VR f/3.5-5.6 kit lens with the D7500 for this review.
Additionally, we had the Tamron 18-400mm F3.5-6.3 zoom lens on hand for another review, so we used it to test the Nikon D7500.
PROS & CONS
Pros
Cons
KEY FEATURES
WHAT'S IN THE BOX?
BUILD QUALITY & DESIGN
The Nikon D7500 has a solid and balanced feel. It's not too heavy to shoot with one hand.
Save for one small red stripe on the front left side, this is an all-black camera with a large number of buttons and dials to help you manage the camera's settings.
Both the front and rear right-hand grips on the camera have a bit of texture in the surface, making it easier to hold the D7500 steadily with your right hand. Most of the buttons and dials are clearly marked and well within reach while holding the camera naturally.
It didn't really matter which lens we had attached to the Nikon D7500 during testing, as the camera felt well balanced, even with the large Tamron lens attached. This model weighs a little less than the D500 -- 22.6 ounces compared to the D500's 30.3 ounces without the lens.
D7500 battery life is extremely impressive. I shot sample photos for an entire day more than once and never received a battery warning. Nikon estimates the battery life to be 950 shots.
ERGONOMICS
Along with strong image quality and fast performance levels, the ability to hold the camera comfortably is a significant advantage of DSLRs over other camera designs. The D7500 doesn't disappoint in this area, as its large right-hand grip is the perfect size.
The camera body measures 5.4 by 4.1 by 2.9 inches, making it a little smaller than some other DSLR camera bodies.
The right-hand side of the camera -- as you're holding it -- includes the memory card slot. You have to slide the cover out of the way to gain access to the memory card.
The LCD screen on the back of the Nikon D7500 tilts away from the back of the camera up to 90 degrees. This is a handy feature when you want to shoot with the camera attached to a low profile tripod or for when you need to shoot an odd-angle image. Having a screen that's touch-enabled also makes it easier to shoot scenes from odd angles, because it's easy to activate the shutter. 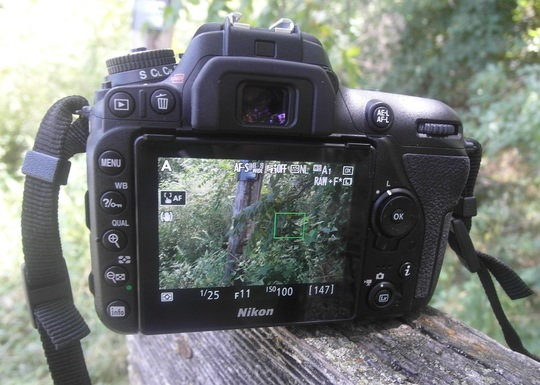 The back of the Nikon D7500 is loaded with buttons and dials surrounding the large 3.2-inch LCD screen. Along the left-hand side of the screen, you can access several buttons, including the Menu button. You probably won't use these buttons very often.
Across the top of the back of the camera is the Playback button and the Delete button, both of which are to the left of the viewfinder. To the right of the viewfinder are the focus and exposure lock button and a command dial. The optical viewfinder offers an impressive quality, producing a 100% view of the scene.
The right side of the back of the camera has several other buttons, including the toggle swtich for bouncing between video and still image recording modes, as well as the Live View buttons. It is a bit of a hassle to have to use this switch whenever you want to shoot a movie. This extra step may cause you to miss the start of the occasional video recording, should something happen suddenly. But most Nikon DSLR cameras have a similar configuration.
You also can see the large thumbpad in the upper right area of the back of the camera, which helps to make the D7500 more comfortable to hold and use.
The top panel on the left side (as you're holding the camera) has quite a few buttons and dials too. The top of the left side contains the mode dial. You can pick from the manual control features you'd expect to find in a DSLR, including manual, aperture priority, and shutter priority. There also are special effect modes and a fully automatic mode available through the mode dial.
There's a dial beneath the mode dial that allows you to change the drive mode, such as for using burst mode.
The right side of the camera body has the USB and HDMI ports, as well as the accessory terminal.
The lens release button and the popup flash button both are on the left side of the front of the camera.
The Nikon D7500's shutter button is on the top panel at the end of the right-hand grip, making it very easy to access and use as you're holding the camera naturally. The power switch surrounds the shutter button.
Additional buttons near the shutter button include a movie record button, an ISO button, and the EV button.
I really love the LCD screen on the top of the camera. Sure, for those who don't change settings very often, this little LCD screen is probably unnecessary.
However, if you're someone who's constantly changing settings on your camera, this monochrome LCD screen is extremely handy, helping you see the changes much faster than looking at the large LCD screen on the back of the camera. Once you get used to using it, you'll wish every camera had one.
The Nikon D7500 has a popup flash that surrounds the hot shoe in the center of the top panel. The popup flash is a nice feature for shooting quick flash photos. We also like having a hot shoe to attach an external flash for greater control over the flash unit when needed.
MENUS & DISPLAY