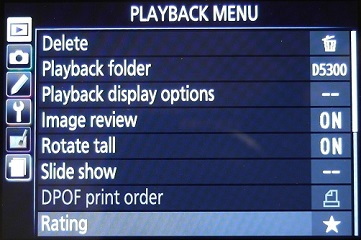 Please excuse the quality of the screen captures, including a live view through the lens. Although the D5300 does include A/V cables, the camera does not output the on-screen icons in Live View mode (other than the AF box), so we had to photograph the monitor.
To see photos stored on the memory card, press the Playback button on the back of the D5300. You can scroll between images by pressing the left and right button on the four-way button. With a single image displayed on the screen, you can see a variety of data about the image by pressing the up and down buttons on the four-way button.
The first screen shows the camera name, file name, date and time the photo was shot, and resolution along the bottom of the screen.
Press the up button and you'll see additional details about the image along the bottom of the screen, including the focus mode, shooting mode, shutter speed, aperture, ISO, focal length, exposure compensation, flash exposure compensation, white balance, and any special effects that were applied. The image will shrink to occupy the upper left corner of the screen, and a histogram will appear in the upper right corner.
Press up again and you'll see even more details about how the image was recorded. Continue pressing the up button, and you'll see three screens with the shooting details about the photo.
The next screen will show the image in the upper left corner with four histograms (one overall histogram and one each for red, blue, and green) along the right side. Press up one more time, and you'll see any areas of overexposed highlights flashing in your photo.
You can change the number of screens that are displayed a part of the Playback mode by accessing the Playback menu and the Playback Display Options command.
To see multiple images on the screen at one time, which makes it easier to scroll through a large number of photos, press the minus magnifying lens button on the back of the D5300 camera body. The D5300 will open grids of thumbnail images as you keep pressing the minus magnifying glass button, including grids of 2x2, 3x4, and 8x10. Press the button a fourth time, and you'll see a calendar screen, allowing you to select a particular day to see images shot on that date.
To activate the D5300's magnification feature in Playback mode, press the plus magnifying glass button on the back of the camera with a single image displayed on the screen. Continue pressing the plus button to increase the magnification and press the minus magnifying lens button to reduce the magnification. Ten levels of magnification are available.
You'll see a representation of the overall image in the lower right corner. The small yellow outline represents the current view in the LCD versus the overall image. Use the four-way button to shift the current view right, left, up, or down.
To play a movie stored on the Nikon D5300's memory card, press the OK button with a movie displayed on the screen. As the movie plays you'll see a status bar across the bottom of the screen and the amount of time elapsed in the video along the top. Use the command dial to fast forward in the video stream by 10 seconds at a time.
To open the Playback menu press the Menu button. Then highlight the Playback button, which is the button in the upper left corner of the Menu screen. Press the right side of the four-way button to highlight the first command in the Playback menu. The Playback menu options are:
You can perform in-camera editing of your stored images through the Retouch menu, which is represented by the paintbrush icon button. The Retouch menu options (some of which may be grayed out depending on the selected shooting mode) are: