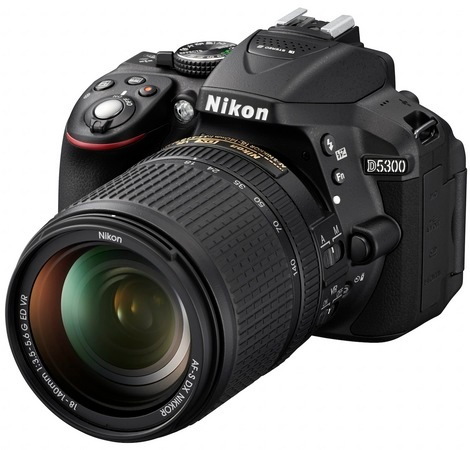 In late 2013, Nikon announced their latest D-series entry-level DSLR, the D5300. The D5300 is replacing the D5200 and boasts a whole slew of upgrades. This is not just a simple re-badging. The D5300 is the smallest D-series camera to date despite having a new grip that offers more surface area and a better hold than the D5200. The D5300 is also the first Nikon D-series camera to shoot Full HD video at 1080/60p, offer built-in Wi-Fi and GPS, and to include the new EXPEED 4 processor, which improves low-light capabilities, shooting performance, and noise levels.
The D5300 also boasts a newly developed 24.2-megapixel DX-format (APS-C) CMOS image sensor with no OLPF (Optical Low Pass Filter) for greater sharpness and detail when taking advantage of the camera's wide ISO range of 100 - 12,800. The D5300 also features Nikon's Scene Recognition System, which uses a 2,016-pixel RGB metering system to analyze shooting conditions and then adjust exposure, AF, and white balance levels for perfectly balanced photographs.
As the first Nikon DSLR with built-in Wi-Fi and GPS, users will be able to connect the D5300 to a free app on iOS or Android smartphones. From there, it's easy to email photos or share them on various social networks like Facebook. GPS is great for geo-tagging, which allows social networking sites, mobile phones, and PC picture editors to keep track where you've taken all your photos.
Nikon D5300 Features
The Nikon D5300 is available in black, red, and gray. The $1,399.95 kit will include (1) D5300 body and (1) AF-S DX NIKKOR 18-140mm f/3.5-5.6G ED VR zoom lens. Click our Buy button to see the most current online pricing.