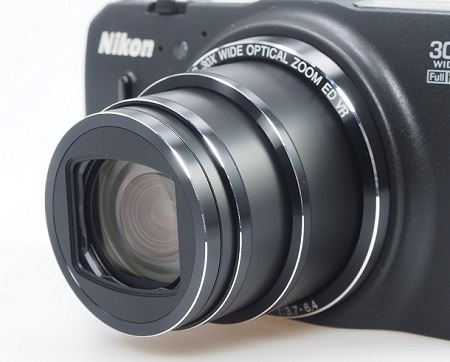 The Nikon Coolpix S9700 camera's strong telephoto capabilities may fool you a little bit the first time you pick up this model. Even though it measures only 1.4 inches in thickness, the S9700 features an impressive 30x optical zoom measurement (25 - 750 mm equivalent). Few cameras of this size can match the strong telephoto capabilities of this Nikon model. You can move through the entire 30x zoom range in a little over 2 seconds, which is pretty fast for a lens with such a large zoom range.
Nikon has included a Hybrid Vibration Reduction system with the Coolpix S9700, meaning this camera uses a combination of electronic image stabilization and optical image stabilization to avoid camera shake problems. I thought this VR system worked pretty well in helping to reduce camera shake when hand holding the camera, as long as you have plenty of light available in the scene.
The Coolpix S9700's lens offers a maximum aperture of f/3.7.
Nikon included a small 1/2.3-inch CMOS image sensor with this camera, offering 16 megapixels of resolution. For a model that has a street price of around $350, it would be nice to have a larger sized image sensor; not to be confused with a higher megapixel count sensor.
The autofocus range for the Coolpix S9700 is:

Popup flash units are becoming more commonly found with fixed-lens cameras, especially those with large zoom lenses, because lifting the flash unit away from the camera body gives it a better angle to the scene and often avoids a shadow from vignetting from the extended lens.
Nikon has gone a step further than a typical popup flash with what's found on its S9700. This model has a spring and lever mechanism design that allows the flash to extend a bit farther from the camera body than a normal popup flash unit. This design allows strong flash image quality with the Coolpix S9700, greatly reducing the possibility of red eye and reducing vignetting. It doesn't quite eliminate vignetting, but it is much less than it would be with a smaller popup mechanism or a flash built into the body of the camera.
The flash unit will pop open whenever it's needed, which is a nice feature. There is no button on the camera body that allows you to open the flash manually. You do have to close it manually though.
The flash popup unit is hinged, so it will bend backward and forward without snapping off should you bump it inadvertently.

The top panel of the Coolpix S9700 contains all of the standard buttons you'd expect to find on this type of camera.
The mode dial is on the far right, allowing you to select from eight different shooting modes:
To the left of the mode dial is the shutter button, which is surrounded by the zoom ring. The shutter button is very large, which makes it easy to find when you're in a hurry.
Farther to the left on the top panel is the power button, which lights green when you initially turn on the camera and which flashes green when the S9700 prepares to go into sleep mode. The power button is small and depressed to the camera body, which makes it tough to press when you're in a hurry.

Although the OLED screen included with the Coolpix S9700 isn't a touch screen and doesn't swivel away from the camera, it's a high resolution screen that looks great; although the colors it displays sometimes seem a bit off. It's a sharp screen that measures 3.0 inches diagonally and that offers 921,000 pixels of resolution. You can select from one of five levels of brightness for the screen, and Nikon gave the display screen an anti-reflective coating, which works well when shooting photos outdoors in sunlight.


Along the right panel of the Coolpix S9700, you'll find ports for both a USB cable (upper port) and an HDMI cable (lower port). Each port covering is attached to the camera with a flexible hinge, and the covering clicks into place.
.

The rechargeable battery Nikon included with the Coolpix S9700 is rated for about 300 photographs per charge, and my tests showed that number was pretty accurate. I could shoot about 250 to 280 photographs per charge. However using the camera's Wi-Fi and GPS settings regularly will drain the battery much more quickly, leaving you with perhaps the ability to shoot half as many photos per charge.

You'll charge the battery inside the camera using the included adapter and USB cable, or you can charge the battery through a USB connection to your computer, which is a nice feature.
The Nikon S9700 makes use of SD memory cards, although the camera can store about 50 full 16MP resolution images in internal memory, should you fill your memory card in the middle of a photography session.