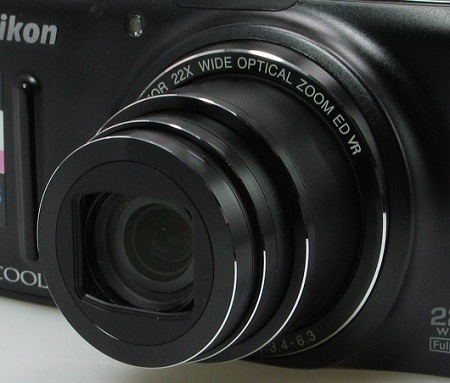 The Coolpix S9500 features a large zoom lens in a pretty thin camera, and this is a nice feature to find. The S9500 only measures about 1.3 inches in thickness when powered down. When you turn on the camera the lens is set at the wide angle setting, but it does extend a bit from the camera, making the S9500 measure about 2.5 inches in thickness. With the 22x optical zoom lens fully extended, the camera measures a little more than 3 inches in thickness. The lens has a 35mm equivalent of 25 - 550 mm and its aperture range is f/3.4 to f/6.3.
The zoom lens moves a little more slowly than some other ultra-zoom thin cameras, requiring about 2.5 seconds to move through the full 22x zoom range. For some reason, Nikon chose not to display the magnification range on the screen as you adjust the zoom lens, which means you won't know if you're precisely stopping on 12x, for example. You will see a bar that represents the full 22x zoom range, and you then can see how far you've moved along the bar to try to estimate your telephoto setting.
To improve the image quality of the S9500, it would've been nice if Nikon had included a larger image sensor than the 1/2.3-inch CMOS image sensor it chose for this model. The image sensor does have 18.1 million pixels of resolution, and it does perform better than most 1/2.3-inch sensors currently on the market as the S9500's image quality is better than most of those cameras.
Nikon included its Vibration Reduction technology with this camera, which is a combination of lens shift and electronic VR for still images and lens shift for movies.

The S9500's focus range is:
A popup flash unit for the Coolpix S9500 is offset on the top panel's left hand side (when holding the camera). This popup flash unit works quite a bit better than a built-in flash unit that you may find on most point-n-shoot cameras. This popup flash unit opens automatically whenever the camera senses that it's needed, which makes it a very useful unit.
When coupled with the CMOS image sensor, the popup flash unit helps the S9500 perform well in low light situations. The flash range at wide angle is an impressive 1.67 feet to 19 feet and at telephoto from 5 feet to 11 feet.
The right side of the top panel of the Coolpix S9500 contains the traditional control buttons that you'd expect to find. The power switch has a blue light around the outside of it that turns on when the unit is initially powered up. The shutter button is just to the right of the power button, and it's surrounded by a zoom ring. The shutter button is a good size and is well positioned to be used easily.
The mode dial is on the far right, and it contains eight shooting modes. For a camera in this price range, Nikon choose to include some odd options on the mode dial, and there really aren't any options for shooting with more advanced control features included in the camera. Without some more advanced shooting modes, the inclusion of the mode dial might not be needed with this camera. The mode dial options are-----
As with many Coolpix point-n-shoot cameras, Nikon chose to include a high-quality display screen with the S9500. This 3.0-inch screen uses OLED technology, which provides a sharper display with more contrast than what you'd find with a traditional LCD screen. The OLED screen can be set to five different levels of brightness and it has an impressive 614,000 pixels of resolution.
To the right of the LCD screen you'll find the S9500's control buttons. Much of this area is occupied by a thumb pad for your right hand that's designed to help you hold the camera during operation. To the right of the thumb pad is the camera's dedicated video button, through which you start and stop movie recording in any mode.
The Playback button is in the middle of the control button area, marked with a Play icon as you might see on a DVD player.
The four-way button is actually a silver ring that can spin, making it easier to scroll quickly through menus or images that are stored on the memory card. You also can press the edges of this silver ring to call up popup menus. The top portion of the four-way button controls the flash menu, the right side controls the EV menu, the down button controls the macro menu, and the left side controls the self-timer menu.
Along the bottom of the control panel, you'll see the Menu button on the left and the Delete button on the right.
The Coolpix S9500 has both a USB port and an HDMI port on the right hand side of the camera, and each is contained in a separate compartment. The covers for the compartments are on flexible hinges and they snap into place when not in use.
.
Nikon did not include a separate battery charger with the Coolpix S9500, which means that you'll have to charge the battery inside the camera; that can be a bit of a hassle. Battery life with this camera is just average. Nikon estimates you can shoot about 230 photos per battery charge, and my tests show that number is only a little high. However, if you use the built-in GPS or Wi-Fi features often, you're going to drain the battery much more quickly, which leads to below average battery performance.
The S9500 can use any SD style memory card.