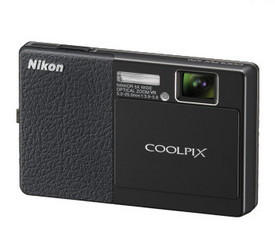 The first touchscreen Coolpix model we've had the opportunity to work with (we did not get an S60 in for review last year), Nikon's S70 is a very stylish ultra-compact digicam. This unit boasts some appealing features, such as 12-megapixels, a nice wide, internal 5x optical zoom lens, durable metal body, and of course a large 3.5-inch (wide aspect) touchscreen OLED display.

Deigned to be easy to use, the S70 offers a host of fully automatic exposure options, including their intelligent Easy mode, which detects the current subject type (landscape, portrait, macro, etc.), and then sets the camera to the appropriate Scene mode setting for optimum results. You can also choose from 17 pre-defined Scene modes as well as the Auto or Program AE mode which gives you access to a few of the more advanced camera settings; like ISO, White Balance, etc.

Nikon did a fabulous job building this camera. The exterior dimensions are suitable for carrying this sleek camera in your front pants pocket, and the metal exterior gives it a good quality feel. I especially liked the textured grip material added on the right front of the camera, which helps you get a good grip on the camera with your right hand. The slide lens cover also acts as the main power switch, and aside from the shutter release button, is the only other control on the exterior. All other camera functions are handled by the touchscreen's GUI (Graphical User Interface). One thing to watch for when using this camera is your left index finger. It can easily get in front of the lens, due to its position near the corner of the camera. You can see an example of my fingertip in the frame on the sample photos page.

While I was very impressed with the build quality of the S70, I can not say the same for the touchscreen system. While all of the various functions are laid out well, the responsiveness of the system was dismal when compared to other touch enabled compact cameras. This led to some frustration at times, however if this is your first ever touchscreen device, it's possible you'll not notice. I on the other hand have used various touchscreen digicams as well as use a touch enabled cell phone everyday.

One feature Nikon has embellished via their Aston Kutcher TV ads is the one touch shooting function. This allows you to simple tap the OLED display to capture an image, initiate subject tracking, or simply set/lock the autofocus and auto exposure. While the one touch shooting function does work well, it does not perform at the speed in which they portray. See our timing tests below for our actual findings. Subject tracking worked well when panning horizontally, however in almost every instance we tested, it failed when moving or following a subject traveling vertically.The touch AF/AE lock function allows you to set the exposure and focus point by taping the screen, then you have to press the shutter release button to actually capture the image; this is good for when wanting to setup for an upcoming shot, as you will already have the focus and exposure set, so there will be minimal lag time.

During our usual shooting performance tests, the S70 was a bit of a mixed bag. From power-up to first picture captured took only about 2.3 seconds from sliding down the lens cover down. Shutter lag when pre-focused measured 1-2/10 of a second, and between 5/10 of a second and 1.5 seconds when including the autofocus, depending on the amount of focus change. The shot to shot delay was very disappointing at 4.5-5.5 seconds between frames. At first I thought this was caused by the slow image review option, however turning it off leaves you with a black screen in between frames while you wait for the live image to return. This is quite a let down for a camera that you'd expect a speedy response from. The continuous or burst function was also dismal at best. It would only capture 2 frames in a row (in about 1.3 seconds), then the sequence would start all over again. So much for trying to capture a moving subject with any kind of success.

Using the Touch Shooting function, I was able to capture images within about 7-8/10 of a second of taping the screen. This is actually a really cool function, and it performed good in our opinion; just note quite as fast as you see in their commercials. All of our tests were completed using a Lexar Professional 4GB Class 6 SDHC memory card, Auto shooting mode, Auto ISO, 12M* quality, flash off and all other settings at the factory defaults. All times may vary depending on lighting, camera settings, media, etc.

When reviewing our sample photos, I found that the S70 captures bright photos with pleasing color. I did notice a good amount of softness on the edges of out photos, which I believe is due to the limited aperture range offered by the 5x zoom. The Nikkor lens does offer a great deal of versatility when shooting. Covering a nice wide range starting at 28mm, this zoom lens will provide you with a nice field of view for indoor photos, as well as nice landscape type photos outdoors. The telephoto end will not bring far off objects up close, but will allow you to tightly frame your subject; something desirable for close-up portraits.

Image noise was a bit more noticeable than I would have liked to see when viewing images at 100%. Even at the lowest ISO 80 setting, you can see some chroma type noise in dark, low contrast areas of your photos. However, this is only really seen when "pixel peeping" at 100% on your PC/Mac. It's very unlikely that you will be able to detect this noise in mid to large sized prints. When raising the ISO, I found the camera performs best when the sensitivity is kept at ISO 800 and below. The higher settings produce so much noise that even your typical 4x6-inch photos will show traces.

Indoors, the S70 also captures pleasing photos. When snapping your friends and family, the camera quickly finds and locks onto faces to ensure optimum exposure and focus. There's also a Smile Shutter feature that will automatically capture an image, one all of the faces inside the frame are smiling. This worked extremely well, especially when shooting photos of my darling 2 1/2 year old; getting a smile can be difficult at times, so this feature is a much appreciated option. Our example shows the camera can capture nice portraits with good flash coverage, sharp details, and pleasing skin tones. The only issue I found was Red-eye was common in our people photos, with the flash set to Auto. Like most Nikon coolpix models, the S70 does very well when shooting close-up or macro type photos. While this camera can focus as close as 1.2-inches from the lens, I found that using the mid telephoto end produced the best results if you are using the flash.

Nikon has upgraded the movie mode options on their Coolpix cameras, with the ability to record 720p HD video. This is a welcomed addition, as HD seems to be the wave of the future, with almost every single point-n-shoot (and dSLR for that matter) offering some sort of HD capabilities. While testing the S70's HD720 mode, I found that this camera produces Ok movies as best. When played back in-camera they look great on the small screen. However, viewing the samples on my monitor showed a good amount of noise, as well as several aberrations. On the flip side, the microphone did well outdoors, and playback is nice and smooth.

Battery life was up to par with most models of this size, keeping within the Nikon's claims of 200 photos per charge. The S70's EN-EL 12, 3.7v 1050mAh Li-ion battery pack is small and light, but still offers a good amount of juice. I was able to capture over a 150 images, several short video clips, and conclude our other tests on a single charge. The only gripe I have about the S70's power supply, is that you have to charge the battery in-camera. This makes it difficult to have a spare pack on hand when on vacation, etc. On the flip side, at least you can use at powered USB port to recharge if your adapter isn't handy.

Bottom Line - the Nikon Coolpix S70 is overall a decent camera. While I did struggle with it's slower GUI and shooting performance, the camera does capture nice photos, and there are plenty of really nice shooting modes and options. I think this would be a great camera for someone looking to capture snapshots of friends and family, with the ability to slip the unit into the smallest of pants pockets or a small handbag. The S70 looks and feels good too, which I'm sure will be appealing to many. With a street price of about $299US, the S70 is competitively priced in the ultra-compact, Touch category. Be sure to check out the S70's competitors, like the Canon PowerShot SD980 IS, Sony Cyber-Shot DSC-T90, GE E1250TW, etc., before making your final decision.