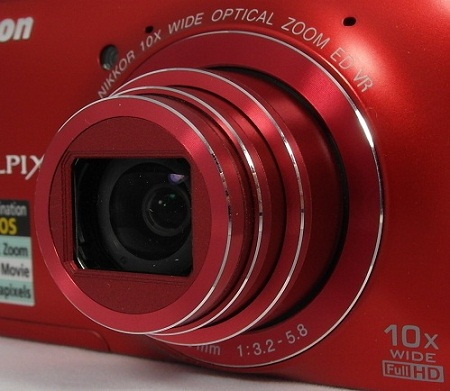 It wasn't long ago that a thin camera with a 10x optical zoom lens, such as the Nikon Coolpix S6300, would've been a rarity. No longer.
Even though an equivalent to the S6300's lens isn't difficult to find in today's thin camera market, this is still a pretty nice unit. It carries an equivalent focal range of 25 - 250mm, which provides some limited wide-angle capabilities, as well as an aperture range of f/3.2 to f/5.8, which isn't bad for a point-n-shoot model. The S6300's digital zoom has a 4x measurement, but the loss in image quality probably means this feature isn't really worth using most of the time. This lens is mated to a BSI (Back Side Illuminated) CMOS image sensor, which gives you 16 million effective pixels of resolution to work with.
For a thin, inexpensive camera, Nikon included a very nice zoom lens motor with this model. You can move through the entire zoom range in just a little over 1 second, and I counted 16 different "stops" in the zoom range, which makes it much easier for you to find the exact focal length that you want to use. Compared to most thin cameras in this sub-$200 price range, the S6300 has one of the better zoom motors currently on the market. As an added benefit, the lens retracts completely inside the camera body when the unit is powered down, and a lens cover slides into place, protecting the glass. When the lens at the full 10x zoom, it extends about 2.25 inches away from the camera body.
Nikon offers a few different autofocus modes, including 9-area automatic, center, face priority, manual with 99 focus areas, and subject tracking. The S6300 makes use of Nikon's Vibration Reduction technology, attempting to counteract the effects of camera shake. The effective autofocus range for macro photos of no closer than 4 inches is a bit of a disappointment; especially for a Nikon camera.
Effective AF range:


The S6300's built-in flash is very wide and thin, and it's embedded in the extreme upper right corner of the camera (when looking from the front). Although this flash doesn't look like it would give you much extra light when shooting photos, it actually works surprisingly well. You do have to make sure that you shoot at the right angle, because when the long zoom lens is fully extended, you can end up with some shadows in your flash photos.
With wide-angle photos, Nikon says the S6300 has a range of about 1.67 to 18 feet (0.5 to 5.6 meters) when not using the zoom, but I think that the far end of that range is a bit exaggerated, based on my tests. I'd feel more comfortable shooting objects at a maximum of 12 to 14 feet away with the flash. When the 10x zoom is in use, the flash range is 3.33 to 10 feet (1 to 3.1 meters). The flash does require a few seconds to recharge after using it, which can cause some shot-to-shot delay problems.

There aren't a lot of controls on the top panel of the Coolpix S6300 -- just the basics shown here. The zoom ring surrounds the shutter button on the right side of the top panel, and it works in a standard manner. There is no mode dial, as you must make all shooting command selections through the on-screen menus.
The on/off switch takes some practice to use properly. You must hold down this button for almost a full second before the camera will turn on. It's embedded in the camera body, which does mean that it's almost impossible to press the power switch accidentally. However, if you're in a hurry to turn on the camera, you more than likely will not hold down the button long enough or miss it all together, which may cause some frustration. Once you've pressed the button properly, a green light surrounds the power button and remains lit for a couple of seconds. This green light also flashes when the camera is in a power-saving mode or when you're charging it.

If you feel like the LCD screen on the Coolpix S6300 looks a little small, you're right. The control buttons on the right side of the back panel occupy quite a bit of room, and the S6300's LCD only measures 2.7 inches diagonally, which is the minimum-sized display screen you'll find on cameras today. This model also only has 230,000 pixels of resolution, which again ranks near the bottom of newer cameras. You can select from five different screen brightness settings, but there is a bit of a glare on the screen when shooting in sunlight, even at the brightest setting.

The configuration of the control buttons for the Coolpix S6300 is pretty standard. In the upper right corner of the back panel is the video button, used to start and stop video recording. Just below that are the Scene button (marked with a green camera icon) and the Playback button, used to review images you've already shot. The Scene button gives you quick access to some of the basic shooting controls, such as the 20 scene modes, some color special effects, and the type of autofocus to be used.
The four-way button is in the middle of the control panel, and it includes a spin ring, which makes it much easier to move through menu selections or previously shot images. The upper portion of the four-way button opens the flash menu, the right side opens the exposure compensation menu, the lower portion opens the macro menu, and the left side opens the self-timer menu. You use the OK button in the center to make menu selections.
At the bottom are the Menu and Delete buttons. The Menu button gives the photographer access to the camera's still image shooting controls, the movie shooting controls, and the overall camera control settings. While viewing menus, pressing the shutter button will return you to the shooting mode. 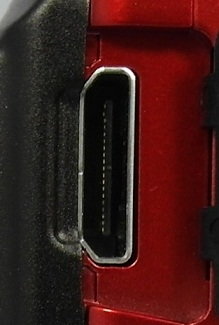 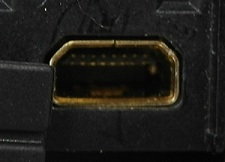 Unlike most point-n-shoot cameras, the Coolpix S6300 has its HDMI and USB slots in different locations. The HDMI slot (the above photo) is on the right side panel of the camera, while the USB port is on the bottom panel. Both are behind soft plastic doors, both of which seemed a little flimsy to me.

Nikon included a much sturdier hinged door on the bottom panel of the S6300 to encase the battery and memory card slots. This door securely clicks into place. You can use SD, SDHC, or SDXC memory cards with this Coolpix camera.

There's nothing out of the ordinary with the rechargeable battery included with the Coolpix S6300. Nikon estimates you can shoot about 230 still images between battery charges or operate the camera for more than 3 hours, and my tests found that this battery charge estimate is very accurate. I was pleased with the battery life with the S6300, although having a strong battery life shouldn't be a surprise with a camera that makes use of a smallish LCD screen.
Nikon did not include a separate battery charger with this model, meaning you must charge the battery inside the camera; which can be a bit of a hassle. The 5-foot USB cable plugs into the adapter, connecting the power outlet to the camera.