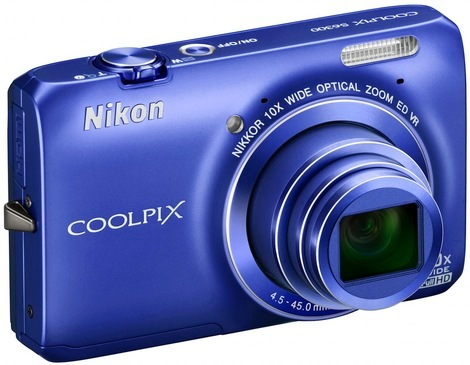 Nikon recently announced nine new Coolpix cameras, four of which are members of their super slim S-series. The S6300 costs about $150 less than the flagship S9300, but other than the zoom length and GPS capabilities, the two cameras are very similar. So, if you don't need an 18x zoom lens or GPS, and you can live with a smaller LCD screen; you might consider the S6300, which is only $30 more than the S4300, but has a number of very important upgrades including a BSI CMOS sensor. CMOS sensors are generally considered more powerful than their CCD counterparts because they shoot full 1080p HD videos, are faster, and handle extreme lightning conditions much more like film.

The S6300 is a sub-$200 camera with a fast, high-quality sensor, and a long 10x optical zoom. It's really easy to use, and most of its options are aimed at beginners. Even better, many retailers have dropped the price on this model by 10% or more ahead of the 2012 holiday season.

The Nikon Coolpix S6300 launched with MSRP of $199.95, and comes in Red, Black, Silver and Blue. See our buy box, or the button at the top right of this page to see the best online pricing.