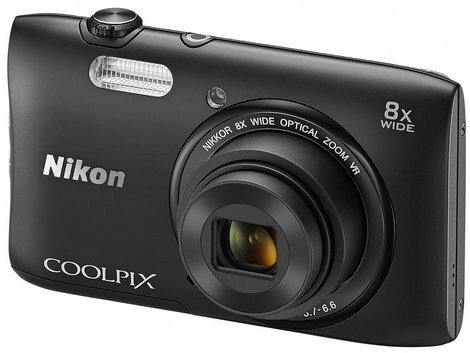 Announced alongside four other Coolpix models at CES 2014, Nikon's new Coolpix S3600 is affordable and compact (only 0.8-inches thick). It features a 20.1-megapixel CCD image sensor capable of recording 720p HD videos. Given the 8x optical zoom, users are going to love the Hybrid VR (Vibration Reduction) system to reduce motion blur and camera shake when trying to capture images and video at full zoom.
Other nice features on the S3600 include: 18 Scene Modes, to easily set up the camera for various shooting conditions, the Smart Portrait System, to help users photograph friends and family, and Target Finding AF, which means you won't miss out on the important shots, even if your subject is moving faster than your own eyes.
Nikon Coolpix S3600 Features:
Nikon's Coolpix S3600 will hit stores in February (2014) -- in silver, black, pink, or blue -- with a $139.95 MSRP.