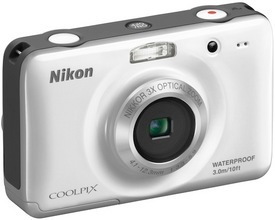 Nikon's second entry into the "Lifeproof" world, the Coolpix S30 is a rugged point-n-shoot that offers pretty standard digicams features in a shell that's made to withstand the elements; and then some. The S30 is waterproof down to 9.8 feet (3 meters) and Shockproof from a fall up to 2.6 feet. This model is not quite as tough as the competition, which also claim freezeproof attributes, however the S30 is far superior to your typical compact digicam when it comes to standing up to an active lifestyle.

Under the S30's rugged shell lays a very simple 10-megapixel digital camera. In fact, its specification list is reminiscent of the mid 2000s, when every camera had a 2.7-inch LCD and 3x zoom lens. Nikon also added 720p HD video recording, which isn't up to par with the typical 1080p offering found on most all 2012 cameras, but still sufficient for 16:9 viewing.

When Nikon set out to create a simple point-n-shoot with the S30, they succeeded. The S30 is as simple as it gets, with a Still image shutter release on the right, and a Movie shutter release on the left. While you can choose some scene modes, the main exposure option for this camera is called "Point and Shoot" mode. The S30 is fully automatic, and offers very few options other than flash mode and self-timer. There are some color altering options for adjusting brightness, vividness, and hue; however that's about the extent of the S30's custom options. The cameras interface is one of the most unique setups we've ever seen. While you have a 4-way controller on the back, it's actually the zoom control (Up and Down), and the Left and Right functions are used for playback. In order to change any setting or enter the menu system, you use one of four identical buttons that run along the left side of the LCD.

These buttons will select the corresponding colored circle to their right, with each circle choosing a different selection. At first I found this system to be quite frustrating, as I tried using the 4-way to scroll through the options; which only works if there are multiple pages available. In trying to make things uber simple for beginners, Nikon has created a horrible interface that even my wife disapproved of.

The S30's body itself is very plan; although it does come in three cool colors: White, Pink, and Blue. The surface is rather smooth, with the exception of a wide strip on the top and sides that's made of rubber. Unless you are using the pinch technique to hold the camera (which seems to be the method Nikon figured you'd use, with the way they placed the Still and Movie shutter buttons), you might find the plastic surfaces a bit slippery when using the S30 around the water. They do include a wrist strap; however some rubber grip material on the front would have been a wise choice.

The controls themselves worked like they should; all of which were also easy to operate thanks to being large, well spaced, and protruding slightly from the body's surface. The camera's LCD was a bit of a let down; being small for one, and offering low resolution. At 2.7-inches and only 230,000 pixels, this is a very low-quality display. The live view is grainy at times, and overall it does not show the quality and detail we've become accustomed to. On a positive note, the display is visible in most all lighting conditions, including bright sunlight and underwater.

Image quality from the S30 was pretty average for a 10-megapixel digicam. Outdoors under bright sunlight, the camera produces pleasing exposures. Sharpness and detail are decent, until you get to the edges of the frame where you'll notice some edge softness. We also noticed quite a bit of noise, which did cause some of our photos to look a bit soft (e.g. our M&M man shots). The flash does a decent job of illuminating subjects, so long as you are in a small to mid-sized room. Overall, the camera was able to capture decent snap shots that are sure to create pleasing 4x6-inch prints.

The 3x optical zoom gives you a limited amount of framing options, with a 35mm equivalent focal range of 29.1 - 87.3mm. At 29mm, you can capture decent landscapes and group photos. The 87mm telephoto extreme won't zoom in tight on distant subjects, however it is good for close-up portraits or macro type shots.

Using the S30 underwater, we found the camera was able to stay water tight the entire time we were in and around the water. I had the camera underwater for about 20 minutes or so, and when I opened the battery compartment later I found it was free of any moisture; other than a drop that was held outside the seal. While I was not able to test the camera to 9.8 feet underwater, I did attempt to capture some shots of fish in my pond. Unfortunately, the water is not near as clear as say a swimming pool, and objects had to be very close to get a good shot. The sharpest photo I captured was of some vegetation that was a few inches from the front of the camera. The only acceptable shot of the fish is pretty bad; but again this is due to the water's clarity, not the camera's capabilities. From using the camera, I think it will be great for shots with friends and family at the pool. When getting into more natural water sources, your subject has to be very close to get a clear shot. With an underwater rating of up to 60 minutes at one time, that's plenty of time for you to get some cools shots of your friend's being silly underwater.

Video quality from the S30 is also average. While you have the option to create 720p HD video, the camera lacks a HDMI out port, so the only way to enjoy your HD movies is by transferring them to your PC or Mac first. Our videos played back smoothly, with good exposure and focus. The camera even did well when shooting through glass at a local aquarium. Audio quality is typical for point-n-shoot cameras, it captures every sound near the camera, meaning you'll hear all kinds of background noise that may not have been as noticeable when you recorded the video.

For power, the S30 uses two AA type batteries. This offers a great deal of versatility, as AAs can be purchased at almost any store. You have a wide variety of cells that you can use, like one-use Alkaline or Lithium cells; or rechargeable NiMH or NiZn cells. The latter will provide you with the greatest battery life; and they will save you money on the long run since you can recharge them time and time again. Nikon claims some impressive battery life numbers, however they seem a bit inflated to me. They quote up to 240 shots with Alkaline, 700 shots with Lithium, and up to 420 shots with their proprietary EN-MH2 NiMH batteries. We used a set alkaline cells, and captured over 150 shots and several short videos before having to swap in a fresh set of NiMH cells to finish the review. This did include extended use of the menu and playback functions, however we still got no where near 240 photos. One note, you need to ensure you have camera set to the correct type of cell being used via the setup menu. You can choose from Alkaline (default), Coolpix (NI-MH), or Lithium. Using the wrong setting will have an effect on your battery life.

Bottom line - Nikon's Coolpix S30 is a unique model in the lifeproof niche. While there are several items we were frustrated with; the camera is quite rugged, snaps decent photos, and costs just $119.95 USD! This is easily the most affordable lifeproof model out there (as of 7/2012); and it shows at times. However, the Nikon S30 can capture some nice shots outdoors, as long as you are not in hurry. I personally feel this would make a great camera for a youngster, being that it's durable, inexpensive, and runs off AAs.