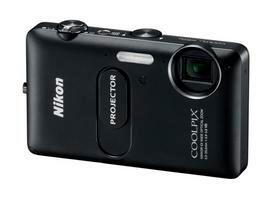 Nikon's third "pj" labeled Coolpix camera, the S1200pj boasts some impressive features for a compact digicam; with the most obvious being its built-in 20 lumen projector. That's right, a projector is built right into the front of this camera, allowing you to share up to a 60" image with friends and family at any time; all you need is a nice flat surface, like a wall, to project the image onto. If that wasn't already enough to get you excited about the S1200pj, it also boasts some of the standard features and technologies that we've come to expect from the Coolpix line. This includes plenty of resolution thanks to a 14-megapiuxel CCD image sensor, a Nikkor 5x optical zoom lens with 28-140mm equivalent zoom range, 720p HD video capabilities, Easy Auto exposure control, and a host of in-camera filters and editing options. The S1200pj offers a nice clean, compact exterior that comes in His and Hers flavors, with color options in Black or Pink.

The Coolpix S1200pj's ultra-compact shell although a bit blocky, offers rounded edges and is pleasing to the eyes. The size is a bit taller than a deck of playing cards, but about the same width and thickness. I found that it was closer in size to my wallet; which is a lot thinner these days. This size allowed me to easily tuck the camera in my jeans or pants pocket, and my wife enjoyed slipping it into her purse. The metal construction gives it a well-built feel, and we never had any instances where it got turned on accidentally. However, the LCD's protective screen is very easy to scratch, as we found small scratches all over the display from our day to day use of the camera. These can only be seen when the camera is powered down, and became pretty much invisible when the LCD is on. Speaking of the LCD, it offers a very nice picture in most lighting conditions, thanks in part to 460,000 dots of resolution, and various brightness adjustments. The controls on the camera are all placed in typical locations, and all of which are labeled well. I had not problems with the placement, size, or operation of any of the different controls. When you first look at the camera, you'll probably wonder what the "Focus" wheel on the top is for. That's there to help you focus the lens on the projector; which we'll get into more later.

The S1200pj's exposure options are plentiful; with all of them being fully automatic. You have various scene modes to choose from (about 18 in total), several Filter modes, Easy auto, Smart Portrait, and Auto (aka Program AE on most cameras). Each offers you the ease of not having to deal with exposure controls, making the S1200pj a true point-n-shoot camera. Easy Auto is Nikon's version of smart or intelligent auto, where the camera not only chooses the proper exposure settings for the shot you are framing, but it also applies some of the settings used in various scene modes to give your photos extra pop. For those who want to play with the camera's settings a bit more, the Auto / Program mode gives you access to some of the advanced camera options for sensitivity (ISO), white balance, and focus mode. We found that both Easy Auto and Auto worked great, producing pleasing results while allowing you to simply focus on framing that perfect shot. Beginners and novice users will appreciate the S1200pj's ease of use, however some of the more experienced users might feel left out with no manual controls.

Image quality from the S1200pj is actually pretty good. In both Easy Auto and Auto mode, the camera was able to capture images that showed very good exposure with pleasing dynamic range. Colors are very natural, and images were very sharp with a surprising amount of fine detail. However, we did notice a good amount of edge softness present on the left and right hands sides of the frame when zooming in on a subject. This causes fine details to be "smudged" when viewing them at 100%, making the edges look a bit blurry at full screen. This is not a huge downfall, as the subject in the center portion of the frame is tack sharp. Looking at our wide angle shots, you see very little edge softness. The 5x optical zoom is fully contained inside the camera, keeping the S1200pj super slim even while in operation. With a 35mm equivalent zoom range of 28-140mm, you have a good amount of versatility in framing your shots in various situations. The 28mm wide end is good for group shots and landscapes, while the telephoto capabilities allow you to tightly frames subjects for macro and portrait photography; just don't expect to zoom across the basketball court with it. There is a 4x digital zoom feature, which can extend the zoom range out to 560mm. We recommend you use the digital zoom feature sparingly, if at all, as image quality suffers as you continue to zoom in.

When shooting portrait images, the S1200pj continued to produce pleasing results. Our samples show good flash exposure, natural skin tones, and plenty of detail. Red-eye was present in some of our photos when using the Auto flash setting, but it was seen in only a minority of our people photos. The flash seems to do a good job of illuminating subjects, providing plenty of illumination to light up their faces and a bit of the background. While Nikon claims the flash has an effective range of 14ft., you'll find that the best results are achieved from no more than 10 feet or so away. Using the zoom or lowering the ISO shortens the effective range. We achieved the best results by staying within 5 feet of our subject(s). The face detection system worked quickly and effectively, targeting faces within the frame almost as soon as you pointed the camera in the direction.

By far the most marketed feature on the S1200pj is the camera's built-in projector. This unit is actually pretty sweet, and during our tests worked very well in various lightning. Obviously, the darker the room the better, however we were able to get a good picture in an average lit room. Nikon claims you can project an image size of 5" up to 60", with a throw distance of 11" to 10'. The size of the image depends on the distance you throw it. The further you throw the projection, the darker you need the ambient light to be. The projector has a maximum output of 20 lumens, which was nice and bright in most conditions. One thing we noticed right off the bat with using the projector is battery life. It drop drastically, and within just a few seconds of using the projector you can watch the battery level indicator drop from full to half charged. When this happened, the output brightness would also drop significantly. Luckily, in the menu, there is a Projector Settings option that lets you turn this power saving feature off. This will allow you to keep the 20 lumen output, however the battery will drain very quickly. Nikon claims you can get about 1 hour of run time using the power saving feature on a full pack, which isn't long at all. To help you comfortably project your images on the wall, Nikon built a handy little foot into the both on the camera that lets you angle the camera up a bit. This allows you to use a flat surface that may be lower that the intended viewing area, and the angle helps the camera project it up to a more comfortable point on the wall. The foot retracts into the body then not being used. Overall, the projector feature is way cool, and every single person I showed it to was simply amazed by it. If you want the wow factor and versatility of a built-in projector, the S1200pj is for you.

The S1200pj lacks a bit in the video department when compared to most modern digicams. This is because the camera can only record 720p HD video, and it has no HDMI output. My guess is that the HDMI interface was left out due to the projector, however I'm sure some may miss this option when wanting to plug the camera in to their HDTV. That said, video quality is average for a consumer point-n-shoot. The exposure system handles both indoor and outdoor scenes well, and video is nice and sharp. The 5x optical zoom is operational during recording, which is a welcomed option. This allows you to have more flexibility when filming. Just use it slowly as we found the AF has a slight delay in catching up when zooming, which gives you a blurry picture for a brief moment. You can see what I mean by looking at our zoom video sample. The stereo microphones are very sensitive, picking up a great deal of background and wind noise. This is quite common, and I'd rate the audio as decent for a digicam. There is a Wind Noise Reduction option, which helps cut down on wind noise, but it doesn't work miracles.

Looking at the S1200pj's battery life, we come to two conclusions. If you use the projector very little, or not at all, the camera offers typical battery life when compared to other compact cameras; about 200+ photos per charge. However, if you use the projector often, you'll find yourself charging the battery often. We used the projector quite a bit, and found ourselves charging the S1200pj all the time. We charged the camera approx. 3 times, and we had only captured about 100 photos. This also included extensive use of the playback and menu systems. Picking up a spare pack would be a wise choice, however because the battery is charged in-camera, it will be difficult to keep both packs charged and ready.

Bottom line - the Nikon Coolpix S1200pj is a very fun camera to use. It offers great shooting performance, pleasing image quality, and plenty of exposure options that are sure to please the average user. The fun part comes when sharing your photos and videos with the built-in projector. While it's a blast to use, it sucks the life out of the battery quick. So, you'll find yourself charging the S1200pj much more often if you use this feature a lot. With a MSRP of $429.95 USD, the s1200pj is expensive when you compare it to a typical compact, 14-megapixel camera. However, incorporating a mini projector comes at a cost; a cost we feel is worth it if you want to wow your friends, family, and coworkers with their picture blown up to 60" on the wall.