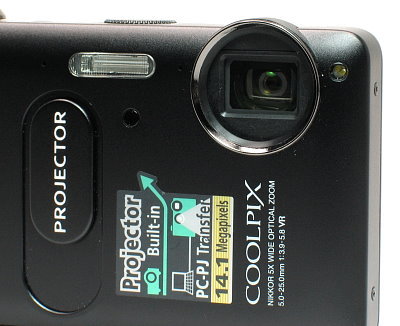 The S1200pj sports an internal 5x optical Zoom-NIKKOR zoom lens, which covers a 35mm equivalent zoom range of 28-140mm. It is made up of 13 elements in 9 groups and has a maximum aperture range of f/3.9-5.8. To help steady your handheld images, the camera also features a combination of lens-shift and Electronic VR (Vibration Reduction), helping you capture sharper photos in a variety of shooting conditions. Because this lens is an internal unit, nothing protrudes from the body when the camera is powered on.

The small, built-in TTL flash unit has a range of up to approx. 14 ft. at wide angle; using ISO auto. The small black dot below the flash is an infrared sensor, which can be used in conjunction with the optional ML-L5 remote control (approx. $24.95 USD).

Nikon's pj series is unique in that fact that they are the only digicams on the market to offer a built-in projector for sharing your photos and videos with others. All you need is a flat surface (like a wall), one that's preferably light in color, and lower lighting. Nikon claims that this projector outputs approx. 20 lumens, which should be sufficient for most dimly lit rooms. The throw distance is approx. 11 inches up to 10 feet. The latter end of that range will really need a dark room. The system uses a high luminosity LED to provide illumination, paired with a 13mm f/2.1 lens. The projected image size can range from as little as 5 inches, up to an impressive 60 inches when you are about 10 feet away from the background surface.

Using the projector does put a big strain on the camera's LI-ion battery pack; Nikon claims a run time of approx. 1 hour on a fully charged pack. We noticed that after a two to three minutes of run time, the output of the projector would drop considerably, and the batter Icon would show half-full; even though we had just taken the camera off charge, and had only capture one still photo (with flash). So, the 20 lumen claim seems to be for a short period of time, then the projector lamp drops in power in order to get you the 1 hour of run time; which is frustrating, as the drop in illumination is substantial.


When you slide the projector cover down with the camera on, the camera will start up the projector. It takes about three or four seconds to "warm up", then it will display the last image or video captured; just like when you press the play button for playback mode on the LCD. All of the same information you would see on the LCD can be displayed through the projector.


On the top you will find several controls, including the projector's focus control. To the right of that we have the Power button and the shutter release with the zoom controls mounted around it. In playback mode, the zoom controls activate the Index (wide) and Magnify (telephoto) options.

On the back you'll find a nice 3.0-inch, 460,000 dot TFT-LCD screen. This is used for framing your photos and video, navigating, and can be used for playback. It offers several brightness adjustments, along with an anti-reflective coating.


To the right of the LCD you have the main camera controls. Top right is the dedicated video recording button, that allows you to record HD video no matter what shooting mode you're using. Next we have the Camera (Record) and Play buttons for swithcing between options. Pressing the camera button also allows you to change the current record mode. The 4-way controller is used for navigating the menus, with the OK button in the center used to accept selections. Pressing "Up" changes the flash mode, "Right" adjusts exposure compensation (depending on the current mode), "Down" toggles the focus mode, and "Left" enables the self-timer. Lastly we have the Menu and Delete buttons, both of which are pretty self explanatory.

On the right hand side of the camera are the I/O (Input/Output) ports. At the top is a unique "Projector input connector", which allows you to plug in your iPod, iPhone, and iPad using an optional video cable adapter. This allows you to used the projector on the S1200pj content that is stored on your other devices. While Nikon notes only Apple devices in the camera's manual, I'd bet that you could hook you Android powered device, or ever a Laptop to the port if you had the right video cable. We'll be trying this out for sure.

At the bottom is the USB 2.0 port that allows you to connect the camera either a PC or Mac for transferring files (and charging the battery), or for standard definition video output to a TV; cables are not included. The S1200pj does Not have a HDMI output; we're guessing that they figure no one will need that with a built-in projector.


The CoolPix S1200pj offers 94MB of internal memory for storing photos and video, however that won't get you far. On the bottom of the camera, you will find a port door that contains the Li-ion battery, and a memory card slot that accepts SD/SDHC/SDXC type memory cards. The camera is shown here with a 4GB Class 10 FujiFilm Ultra Performance SDHC card.

Power is supplied by Nikon's EN-EL12, 3.7V 1050mAh rechargeable Li-Ion battery pack. This battery is capable of capturing up to 220 images on a single charge (CIPA stanard testing), or it can run the projector for up to 1 hour. The battery is charged in-camera using the included USB cable. You can charge using the included USB to AC adapter, or through your computer's USB port. The latter of which is much slower.


On the bottom of the camera you will find a retractable foot, which Nikon calls the "Projector stand". It helps you angle the camera upward a bit when wanting to project images from a flat surface like a table. However, it can also help with taking group shots with the self-timer. To the right you can also see the camera's metal tripod socket.

Here we have the foot extended.

The next two shots show the difference in how the camera sits on a flat surface with the Projector stand up, and extended.