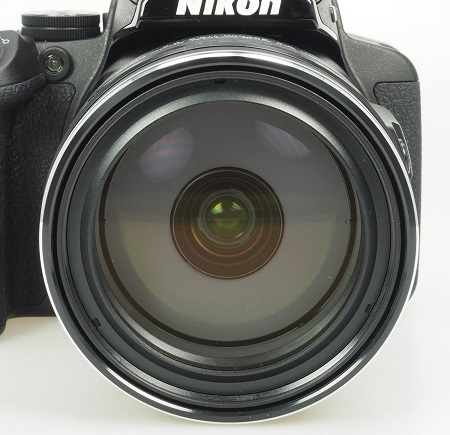 Nikon gave the Coolpix P900 a 1/2.3-inch image sensor, which is similar in size to what you'd find in the most basic point-n-shoot camera. It would've been nice to see a slightly larger image sensor in a camera in this price range. This model offers 16-megapixels of resolution.
As you can see here, the front glass element of the lens is huge, which is needed to accommodate the 83x optical zoom lens -- an almost cartoonish number for an optical zoom measurement. The 35mm focal length equivalent for the P900 is 24mm to 2000mm, which is the largest focal length measurement and optical zoom measurement you'll find in a fixed lens camera currently on the market.
The P900's lens has a maximum aperture of f/2.8 at the 24mm setting and a maximum aperture of f/6.5 at the 2000mm setting.
The Nikon Coolpix P900 is a huge camera ... and that's before the 83x zoom lens is extended. The P900 measures about 5.5 inches in depth when powered down. At the largest telephoto optical zoom setting, the camera measures 8.5 inches in depth. This is the biggest fixed lens camera I've ever tested, both in terms of size and weight. The Coolpix P900 weighs nearly 2 pounds with the battery and memory card inserted.
You can move through the 83x zoom range in about 3.5 seconds, and the zoom lens moves smoothly throughout the range. Strangely, Nikon chose not to show the optical zoom number measurement anywhere on the display screen, which means you just have to guess at where you're at in the zoom range.
Nikon included an aggressive vibration reduction feature in this model, which is important or you wouldn't have much of a chance to hand hold the camera steadily when using the zoom lens at its full extension. As you can see on the sample photo page, I did have some success hand holding this camera with indoor photos while using the full zoom. Still, if you want the sharpest images, you'll probably want to use a tripod whenever you can with the P900.
The autofocus range for the Nikon P900 is:
As the 83x optical zoom lens is the featured element of the Nikon Coolpix P900, it makes sense that you'll have more than one option for adjusting the zoom setting. There's a traditional zoom ring around the shutter button, which matches what's found on most cameras.
But Nikon also included a zoom switch on the side of the lens barrel, and you'll use your left hand to adjust the switch upward for a telephoto setting and downward for a wide angle setting. Both the zoom ring and zoom switch work well and move the zoom lens at the same speed, so choosing which one to use will be a personal preference.
Nikon also included a reframe button on the left side of the zoom barrel (marked with a rectangle and four arrows icon). If the subject moves out of the frame while you have the zoom lens extended, you can press and hold this button to quickly move the lens to a wide angle setting, where you can reacquire the subject. Then release the reframe button, and the lens will return to the previous optical zoom setting.
If you prefer, you can assign this switch to control the manual focus setting. Open the Setup menu to find the command to change the function of this switch.
You can see the flash button at the top of this photo. Press this button to open the popup flash unit, which is centered over the lens barrel. The Nikon P900 does not open the flash automatically whenever it is needed, but you will see a "raise the flash" message on the LCD screen when the flash is needed.

The popup flash extends a couple of inches above the lens barrel when you press the flash button (which is just visible at the bottom of this photo). With such a large lens, having the flash well above the lens barrel gives it a better angle to the subject to avoid problems with vignetting.
The flash range with the P900's popup flash is:
The Coolpix P900 has no hot shoe for attaching an external flash.

With such a large lens and heavy camera, it's important to have a large right-hand grip, which Nikon provided with the P900.
The right side of the top panel of the camera also contains a handful of buttons and dials to help you control the camera.
At the edge of the right-hand grip is the shutter button, which is surrounded by the zoom ring. This is a good sized button and easy to reach with your fingers curling the right-hand grip.
Below the shutter button is the Fn button, which allows you to open a popup menu for a commonly used setting. You can pick which setting to associate with the Fn button through the Setup menu. The power button is to the right of the Fn button. A small green light in the center of the power button indicates when the camera is charging. Both of these buttons are too small for my liking, as it can be tough to press them when you're in a hurry.
Below the power button is a command dial that allows you to make changes to certain camera settings quickly. Nikon did a good job of using an icon to indicate on the display screen the instances where you can use this command dial to change a setting.
And to the left of the command dial is the mode dial, which contains 11 settings for the shooting modes, which include:
On the mode dial, you'll see the four advanced shooting modes (M, A, S, and P) separated with a white bracket.
The Coolpix P900 has a 3-inch LCD screen (measured diagonally) that includes 921,000 pixels of resolution. Six levels of brightness are available.
The LCD screen is articulated, which is a great feature for shooting odd angle photos or for attaching the camera to a tripod and tilting the screen so you don't have to bend over to look at the display screen and frame the scene. And you can turn the screen so it is facing inward when you aren't using the camera, providing protection for the screen. You also can tilt and twist the screen until it's facing forward, allowing you to shoot selfies ... although the Nikon P900 might be a little too large to allow for easy selfie photography.
An electronic viewfinder is important to have in an ultra zoom camera, especially if you want to shoot photos while hand holding the camera. By moving the camera up to your eye and using the viewfinder, you'll have more success in holding the camera steady.
The EVF has 921,000 pixels of resolution and shows the same data you'd see on the LCD screen when shooting photos. You can adjust the brightness of the EVF by three levels using the Setup menu.
You can see the sensor just below the P900's viewfinder window. Any time this sensor is blocked from light, the camera automatically switches the live view from the LCD screen to the EVF. This is a great feature, as each time you bring the viewfinder to your eye, you'll block the sensor with your face, and the live view will switch automatically. You also can manually change the live view from the LCD to the EVF and vice versa by pressing the monitor button (just to the right of the viewfinder). To the right of the monitor button is the DISP button, which you'll use to change the data shown on the LCD or in the EVF window when you're shooting.
The diopter adjustment knob is just to the left of the viewfinder.
The right side of the Coolpix P900's back panel contains most of the camera's control buttons. At the top of this photo, you can see the edge of the mode dial (far left) and the command dial (far right). Just below the command dial is a large thumb pad, which makes it easier to hold the P900 comfortably.
The movie recording button (with the red dot) is just to the left of the upper portion of the thumb pad. Just below the movie recording button is the Wi-Fi button. Press this button to make a connection to your Wi-Fi network. The Playback button is just below the Wi-Fi button, allowing you to enter Playback mode, where you can see your stored photos.
Nikon designed the four-way button as a ring that you can spin to move through menu commands or stored photos more quickly. In some shooting modes, you can use the four-way ring to change the aperture setting on the camera.
You also can press the edges of the four-way ring, just as you would with a traditional four-way button. Each edge of the four-way ring opens the following popup menus:
Press the OK button in the middle of the four-way ring to make menu selections.
The Menu button is at the lower left of the collection of control buttons, while the Delete button is at the lower right.

The right hand side of the Nikon Coolpix P900 contains the HDMI and USB ports behind a flexible plastic covering.


The bottom panel of the camera contains the battery and SD memory card compartment, which is protected by a hard plastic door that latches in place with a toggle switch.
Nikon estimates this model's battery has a lifespan of about 360 shots, but my tests showed a "real world" result of about 250 to 300 shots. You'll receive better battery life if you use the EVF more than the LCD screen and if you aren't using the zoom lens switch a lot.
You'll charge the battery inside the camera using the included USB cable and wall outlet adapter.