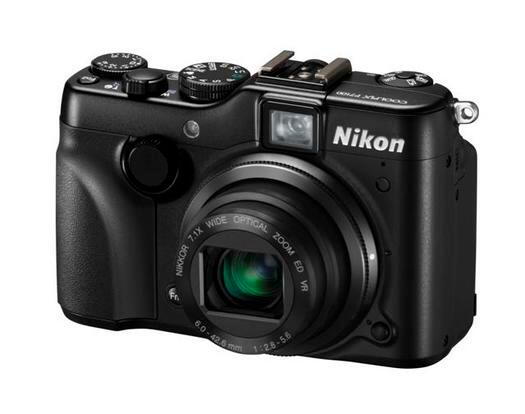 Nikon is launching six all new Coolpix series cameras this September, and Steve's got a chance to get an early, hands on sneak peak of each one. First up, we have the Coolpix P7100, which is a follow up to last year's P7000. Holding a P7100 is a fun experience. It's a heavy camera, solid, and well built. It feels tough and perfectly molded for your hands. And then there's the new display, a 3.0' LCD vari-angle model, which means you have a 180 degrees of viewing angles up and down. It doesn't swivel, but it's really handy for shooting shots above or below your eye level.
Nikon says the new P7100 is all about speed, and they aren't kidding. It turns on and is ready to take a picture as quickly as your fingers can move from one button to the next (less than a second). Also very fast is jumping in and out of the menus to snap a shot; the menus themselves have been updated to allow easy browsing, and many of the camera's functions are accessible without needing to enter the menu environment.
There are assignable Function buttons, which allow you to pull up an ND filter, histogram, framing grid, or -- something very helpful -- a horizon line. Owners can also customize three user modes on the main selection dial, which is great for easily cuing up your favorite versions of modes like Portrait or Movie shooting or black & white photography or whatever your particular favorite. Also, in a continued attempt to make this point-and-shoot camera more like its older dSLR siblings, the P7100 features a command dial on its back and an all new for this model sub-command dial on the front. These will allow you to, for example, adjust shutter speed and aperture manually and without having to go into the menu.
The P7100 features a 10.1 megapixel 1/1.7" CCD sensor running through a 7.1x optical NIKKOR ED zoom lens (35mm equivalent to 28-200mm), which makes this camera capable of 720p HD movie recording. A nice addition to this model and the movie recording mode is the "AE Lock & Hold," which prevents the camera from adjusting your exposure when you tilt and pan. This camera is capable of capturing pictures in RAW (NRW format) and features some in-camera editing for these files. Lastly, the P7100 will include all of the P7000's artistic effects as well as three new ones: a zoom focus (it zooms the camera as the picture is taking to create an interesting effect), cross-processing (make your camera look like it was shot on an older, film model), colored filters for b&w (adjust any of your colors to adjust your b&w photography).
Nikon Coolpix P7100 Features Include:
The Nikon Coolpix P7100 will be available on September 22, 2011 with an MSRP of $499.95. And as Henry Ford is often quoted, you can have your P7100 in any color as long as it's black.