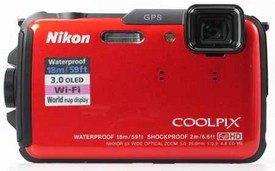 The Coolpix AW110 comes in a tough little package. The body is built to go deep underwater and take a beating above it. The camera is rated to go 60 feet underwater and survive a drop as high as 6.7 feet. It's also built to geotag your photos and let you know where you are, having built-in GPS with an altimeter and a digital compass. On the slightly less adventurous side, you can use the camera's Wi-Fi to send and share photos, provided you have the iOS or Android app on a nearby smartphone.

To help you out with marine photography, there is an action control button that lets you use gestures rather than the dedicated buttons to select one of four features: Auto mode, movie recording mode, quick playback, and GPS.

On a more day-to-day routine, the AW110 offers a modest set of features. The 5X zoom is weak compared to many cameras, the built-in flash is good but not extraordinary, and low-light performance is limited (maxing out at ISO 3200).

Image quality is, on the whole, very good but not extraordinary. Considering the small size of the lens, you'd be foolish to expect the optics of a much larger lens. When viewing still images at 100% on a large monitor, lack of fine detail is obvious and digital noise is evident even in daytime shots taken at a very modest ISO 200. You also get some distortion at the edges when shooting at wide angle. But these shortcomings are not so noticeable at smaller on-screen viewing sizes.

In my testing, the biggest image quality drawback was due to the auto focus not responding quickly enough - or, not responding at all. That's because when using continuous shooting, the focus is fixed with the first shot. This camera offers very fast burst modes (high-speed burst shot at 7.5fps in my testing) but it's practically negated by the inability to focus continuously. The shooting menu offers continuous AF, but it really just means that the camera is focusing continuous until you start shooting. If I was a scuba diver looking for a camera, I'd be concerned that too many of my underwater shots would be of out-of-focus fish.

I also found that when using the auto modes while shooting action, the camera often did not bump up the ISO enough to enable a fast-enough shutter speed to freeze the action. It was most successful outdoors in afternoon light. But in late afternoon light or indoors, I got more blurry shots than I would have liked. This may be intentional given that higher ISO settings quickly introduce a noticeable softening of detail.

In low-light situations, the edges of objects acquire a splotchy texture akin to a Gaussian blur or looking through obscure glass, likely due to noise-reduction and/or anti-shake artifacts. To my eye, this became noticeable at ISO 800. The camera maxes out at ISO 3200, and you can see the results on our Samples Page.

Of course, you can always use the built-in flash. Like the lens, the flash is small, so you can't have wild expectations. But for its size it does cast about a good amount of light. The manual rates it as having a range up to 17 feet at wide angle. I found in my testing that the flash could light up a room up to 12 feet away, possibly 15 feet, but that somewhere in that range is where the drop-off occurred.

Though the lens only offers a 5X zoom, you do get a 28mm wide angle (35mm equivalent). Another plus is that in macro mode the camera can focus as close as 1 cm, or 0.4 inch, which will get you some dramatically close shots of small subjects.

The video quality is similarly on a par for a compact camera. It's not the sharpest-looking 1080p video, but is quite attractive if you're viewing it at modest sizes. Oddly, continuous auto focus is available for video recording, but it's turned off by default. It took me a handful of blurred videos for me to realize this. For a ruggedized camera designed for punishing activity, and presumably photographing that activity, this seemed an odd choice to me.

The best video feature is the slow motion and fast motion recording modes. There are four such modes, which record at 8X, 4X, 2X and 0.5X speeds. In other words, they play back at, respectively, 1/8 speed, 1/4 speed, 1/2 speed, and 2X - the first three play in slow motion. You can switch from normal speed video recording to slow motion or fast motion recording, which is a neat feature. If you select the Open with HS footage option in the menus, you start recording video in the selected HS mode. If Open with HS footage is turned off, you begin recording video normally, but can launch your selected HS mode by pressing the OK button. You can't use the zoom while recording in one of the high speed modes.

The side of the camera opposite the weather-sealed battery and memory card compartment is dedicated to adventure. That is, the two buttons you'd use with your left hand are large (you might be wearing gloves) and launch GPS and gesture features. The map button brings up an on-screen map that you can set to display various levels of detail, including points of interest. The action button allows you to shake the camera to change functions - handy when you don't want to fiddle with all the buttons or, again, are wearing gloves that make it impractical.

On the more routine side of shooting, the camera offers 20 scene modes, which should cover most situations if you're not happy with the Easy Auto mode, which automatically picks one for you. There is also Auto mode, which operates like a Program mode - it allows you to change a handful of settings such as ISO, AF area mode, and white balance. And that's as deep as the manual controls go. There are no semi-manual modes such as aperture-priority and shutter-priority, much less a full manual mode. In this respect, although the camera is aimed at the adventurous and possibly clumsy, it isn't well-suited to those whose adventure includes tweaking camera settings to get a terrific shot.

What it does do is offer a quick effects menu while you're shooting. After each shot, the preview image offers a one-button trip to a selection of 12 effects. You press OK to get there, and the screen shows preview thumbnails of each effect on your shot, instead of a sample included with the camera. You can turn this feature off if you prefer to do all your photographic effects later in playback mode. The 12 effects are pretty typical stuff, such as toy camera, painting, high-contrast monochrome and sepia. But navigating the thumbnail icons is less than elegant: You can't use the up/down on the four-way control, so you have to slog through the choices using only left/right (and there's no dial to get you there more quickly). The best offering here is that the selective color effect offers 12 colors - and, again, the preview icons let you know what your final image will look like so you don't have to perform trial and error to find just the right shade.

The Coolpix AW110 is fast in the burst mode department, but not extremely quick out of the gate. In my testing, I found that I could not capture an image within 3 seconds. Most often, I pressed the shutter release button too soon, and had to let go of it and press it a second time to record an image.

Battery life is rated at a modest 250 shots, though this CIPA rating supposes that you're using the flash half the time. In my testing, rarely using the flash, I recorded approximately 450 shots and about 25 short videos on a single battery charge (but did not have the GPS feature turned on, which will drain the battery more quickly). The camera comes with an external battery charger, so you could always get a second battery as a backup.

Bottom line - The Coolpix AW110 offers toughness in a conveniently small package. Its GPS, compass, altimeter, and action button features make it a really good match for the outdoorsman. The image quality is good, but the tradeoff for ruggedness is that low-light performance isn't stellar, auto focus is not extremely fast, and you get minimal settings adjustments.