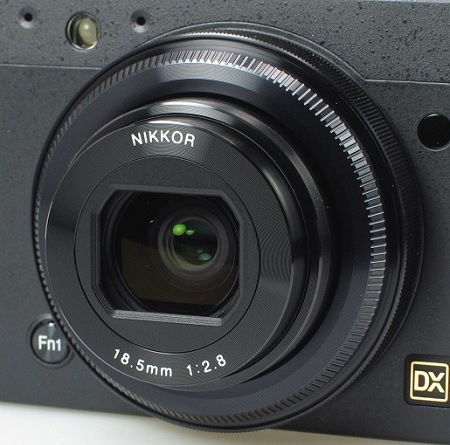 Nikon has included a fixed lens with the Coolpix A, meaning it has no zoom or telephoto capabilities, which will be a significant drawback for some photographers. However by eliminating the zoom, Nikon was able to construct the Coolpix A's lens to be of an extremely high quality, making scenes especially sharp at the edges.
The Coolpix A's NIKKOR lens has a 28mm equivalent focal length, giving it a bit of a wide angle capability versus a typical lens. It features a maximum aperture of f/2.8, which is a bit of a disappointment for a camera in this price range. A slightly faster lens would have been nice to have.
While the Coolpix A has a high-quality lens, its 16.2-megapixel image sensor is its best feature. The DX format, APS-C sized CMOS image sensor is the same type of image sensor that you'll find in some Nikon DSLR cameras. This image sensor's ability to create high-end images is the best feature of the Coolpix A. Few cameras this small in size can offer such a high-quality image sensor.

Nikon included three focus modes with this camera: Autofocus, macro focus, and manual focus. You'll control the focus modes through a toggle switch on the left side (as you're holding the camera).
When you're using manual focus with the Coolpix A, you'll turn the focus ring around the lens housing to dial in the sharpness of the focus. To help you achieve a sharper focus, Nikon included magnification buttons on the back of the camera in the lower left corner. Use these buttons to magnify the scene and then use the manual focus ring to dial in the sharpness.
It's a little disappointing that the macro focus range for this model limits you to being within 4 inches of the subject. For a camera in this price range, you'd expect better performance; especially when you consider that Nikon used to be known for offering some of the best macro capabilities in a fixed lens camera. The focus range for the Coolpix A is:
The standard autofocus setting for this camera sometimes struggled to come up with a sharp focus. It seemed to work slowly. And several times while shooting my test photos, I ended up with an image that was slightly out of focus because the autofocus simply couldn't dial in. I actually had better luck achieving a sharp autofocus with the toggle switch set to macro focus instead of AF, no matter how close to the subject I was standing. The hit and miss autofocus issues were a frustrating aspect of using the Coolpix A. Manual focus worked extremely well every time, though.
Nikon included a popup flash unit with this camera that pops out of the left side of the top panel of the camera. A switch on the back panel of the camera in the upper left corner opens the flash.
It can be difficult to find a place to hold the camera with your left hand when the flash is activated, because your left fingers are naturally going to want to rest in the area of the flash. To close the flash just press down on the top of it until it clicks into place.
Nikon's estimated flash range is from 20 inches to 37 feet when the camera is set on automatic mode and the ISO is set to auto.
The panel hiding the popup flash is visible in this photo in the upper left corner. You can also just see the switch for the popup flash in this image, which is below the panel for the popup flash. The switch is marked with a flash icon and a icon that looks a bit like Pac-Man.
To the right of the popup flash panel is the Coolpix A's hot shoe, thorough which you can attach an external flash or an optical viewfinder, both of which are available for purchase as an add-on to the Coolpix A.

Eight shooting modes are available on the mode dial, which is on the top panel of the Nikon Coolpix A near the right side.
To the right of the mode dial is the shutter button, which is the smaller button of the three pictured here. The shutter button is a little small, but it's raised away from the camera enough to make it comfortable to use. The camera's power ring surrounds the shutter button. Just pull the ring toward you (or downward in this photo) to turn the camera on or off. The switch will spring back to the position shown here after you slide it toward you.
The control on the far right is a command dial, through which you can scroll through options on the screen more quickly than using the four-way button..
Because the Coolpix A does not have a viewfinder (although you can purchase one separately), you'll have to use the LCD to frame your scene. Nikon included a 3.0-inch LCD screen with this camera offering 921,000 pixels of resolution. Even though the screen has a few problems with glare when shooting photos in bright sunlight, Nikon does offer nine brightness settings that allow you to increase the brightness to make the screen easier to see.
As you would expect on a camera in this price range, the Coolpix A's screen resolution and quality is well above average. It would have been nice to either have a touch screen or an articulated LCD feature included with a camera in this price range.
The far left side of the back panel has some control buttons. At the top is the exposure compensation button, which also allows you to adjust the aperture or protect photos from deletion, depending on which mode you're using.
The second button is used for adjusting the ISO setting. It also can serve as the Fn2 button in certain modes, which you can personalize.
The two buttons toward the bottom are used to magnify the image on the screen as you're framing a scene. Use the button with the magnification glass and plus sign on it to zoom into the scene. This magnification makes it easier to ensure that the subject is in sharp focus by using the manual focus ring. Once the manual focus is set, use the bottom button to zoom out of the scene again.
The bottom button also serves as the camera's Help button in certain modes, as well as the thumbnail image button in Playback mode.

The Playback button at the top opens Playback mode, while the Menu button will open the camera's menu screens.
The scroll ring is the largest button on the back panel. You can use this ring either as a four-way button or you can spin the ring to move through the menu selections or stored photos more quickly. Press the OK button to make any menu selections.
The i button in the lower left corner of this panel allows you to make changes to the camera's individual settings, depending on which shooting mode you're using. Although you may think the i button is used to gain information about a scene or as a Help button, it's not, which can be a little confusing.
The delete button for use in Playback mode is in the lower right corner.


A hard plastic hinged cover on the left side of the camera protects the accessory terminal (top) and the USB port. You can connect a variety of accessories to the terminal, including an external GPS unit. You'll use the USB port to download photos with the included USB cable.
.

The right side of the Nikon Coolpix A has another hard plastic hinged cover that protects the HDMI port.


Nikon included a separate battery charger with the Coolpix A kit that plugs directly into an outlet. This makes it easier for you to use more than one battery with this camera, as you can charge one battery while using the second battery. You may want to purchase a second battery with the Coolpix A, because this battery is only rated for 230 photos by Nikon. In real-world testing I found this battery averages closer to 200 photos per charge, which is pretty disappointing for a camera in this price range.
The battery and memory card fit in a compartment on the bottom of the camera. The compartment has a plastic hinged cover that locks in place with a switch. The Coolpix A uses SD sized memory cards.