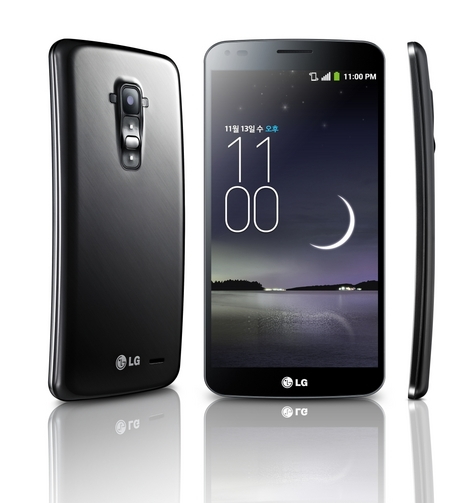 LG has released another potential flagship Google-powered Android smartphone, the G Flex. It works with Sprint, AT&T, and T-Mobile cellular networks and can be purchased with or without a two-year contract. It features the same 4.4.2 KitKat OS, 2.26 GHz quad-core processor and 2G of RAM as the Nexus 5, but the G Flex has a HUGE 6.0-inch curved HD OLED touchscreen display. The display features "Dual Window" which allows you to surf two different websites (or run two different apps) simultaneously; however, the screens resolution is NOT Full HD, and due to its size, has a sub-Retina pixel density.
The G Flex's main/rear camera is nicely appointed. The 13-megapixel CMOS image sensor boasts numerous shot modes, and can even record video in the UHD (4K) video format as well as Full 1080p HD. It also features the full suite of Google Apps as well as other features to improve productivity, such as KnockOn, which allows users to use a "secret knock" to wake the smartphone rather than enter in a numerical key code. Wi-Fi, Bluetooth 4.0, and Android Beam are also built in. And, should you pick up the optional adapter, you can even charge the G Flex without ever plugging this bad boy in.
LG G Flex (D959) Features
The LG G Flex (D959) is available for Sprint, AT&T, and T-Mobile. Prices range from $99 (with a two-year contract) to $624 for the unlocked version (which with good credit can be purchased via T-Mobile for $0 down and $26/month for 24 months). See our buy box at the top right of this page to see current online pricing.