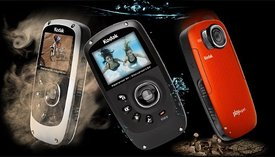 Headed to the skate park, track, trails, surf, mountain, or runway, and looking to capture your experience? Kodak releases the appropriately named PlaySport (aka Zx5) for your dilemma. This waterproof, dustproof, shockproof, pocket-sized HD video camera allows for the capture of video at resolutions of 1920x1080 at 30fps (frames per second), 1280x720 at 60fps or 30fps, and 848x480 at 30fps. Additionally, it has the capability to capture 5-Megapixel still images with the same 16:9 aspect ratio as the HD videos. Videos and pictures are recorded using a 1/2.5 CMOS lens, and stored on the internal 128MB of memory or on an SD/SDHC card of up to 32GB. The Playsport includes a monaural microphone for audio input, a HDMI output for viewing videos on TV (cable sold separately), as well as a high speed USB 2.0 output to connect to a computer for easy uploads and charging the battery.

Aimed at being a rugged camera, the Playsport surely has that feel, but flounders with one important oversight. Encompassed in a one-piece unit about the size of a blackberry, it has a sturdy feel in your grip. Kodak claims that the camera is shockproof up to 1.5 meters (about 5 feet), and that "accidents happen... luckily the PLAYSPORT isn't afraid of a little fall, it can take it"; how true this is. We can all agree that accidents DO happen. How many times have you had to activate your ninja reflexes to catch your falling phone? The beauty of the Playsport is that you can just let it fall, as we have found out, is more likely to happen if you are doing any kind of sport or physical activity. The Playsport in also rated waterproof down to 3 meters (9.8 feet). It did perform well under water, and remained waterproof up to that specification, but the SD card and I/O port doors had me worrying. The doors, located on both sides of the camera, are too easy to open with a slide release. I found that the putting the camera in my pocket or holding it in my hand, while swimming that these slide releases could easily be caught on something and open the doors. My apprehension of destroying the camera by this had me constantly checking the condition of the slide locks. If it weren't for the possibility of these doors opening, the Playsport would be a video recorder for some extreme environments.

Designed for one-handed use, the Playsport simulates the operation of most cell phones. At approximately the same size, shape, and button placement, most everyone that has ever owned a mobile phone should find the Playsport operation a natural skill. The control layout has an extremely simple button placement with only 5 well-spaced buttons and a 4-way directional pad surrounding the shutter release. Button identification is logically labeled, and requires little to no instruction for initial use.

While the button layout is fine-drawn, button response falls short. The buttons (particularly the 4-way directional pad) are stubborn and require too much pressure for any kind of feedback. Often I found the need for excessive pressure to obtain the desired on-screen task. For example, while traversing though pictures/videos in playback mode, the 4-way directional pad often required unnecessary pressure to switch pictures. Further, most likely because of a hard button press, the playback would skip ahead two pictures. Overall, these pigheaded buttons make for a frustrating control manipulation.

With a combination of decent video quality and simplified operation, filming movies with the Playsport is fantastic. The ability to capture full HD 1080p at 30fps in such a small device is incredibly handy. Exposure and colors were kept very true-to-life in all videos. On a cloudy morning out on the water, the camera captured the "washed-out" colors typical seen on a cloudy morning. Later, after the sun burned away the clouds, and brought out all the vivid of colors of boats and bathing suits, the Playsport captured that too. Like the name suggests, the Playsport did well capturing moving subjects. Whether it was the exploits of a watercraft, animal, person, above water, or under water; the video encapsulated the action. Plus, all of this is super easy to record. Holding the small lightweight camera and a simple press of the shutter release, allows you to focus on the action instead of the camera's controls. Video audio is recorded by the small mic next to the lens on the front of the camera. Whereas above water sound was fine (besides transforming my voice into that of a girls), underwater sound is unnatural and inaudible. This is typical with most cameras when filming underwater, but there are better options available; such as the GoPro Hero.

Considering the Playsport is a predominantly video-oriented camera, the still image quality is decent. Capturing images at 5-Megapixels at 36mm (35mm equivalent), the Playsport does well with exposure. At its full potential, the image quality is about the same as those captured with a mobile phone from a few years back. Modern smartphones, like my HTC Thunderbolt, do a better job with image quality than the Playsport. Pictures become "water colored" when viewed at 100%, and quickly increase pixilation any higher than that. The zoom is digital, so any pictures taken utilizing the zoom will be extremely pixelated. That being said, the still image capture is a bonus feature and should be regarded as such. It is useful for snapshots when needed, but if higher quality images are needed, bring another camera.

Viewing the live feed or the playback mode is nice-looking with the Playsport's 2.0-inch LCD. The screen size seems appropriate with the camera's overall size. Kodak incorporates a Glare Shield to help viewing in a bright environment. While viewing in the direct sun, compounded with a water reflection, I had no issues with LCD observation. While the LCD doesn't give your video quality justice, it gives a false impression of zoomed-in pictures. Like previously mentioned, it helps to remember that the zoom is a digital zoom, and though a picture will look good on a 2.0-inch monitor, it will be very pixelated on a computer.

Bottom Line - Kodak's Playsport Zx5 is a decent alternative to the rugged HD video camera scene, and generally for the growing pocket HD video camera market. Besides the possibility of an accidental side door release, it can be dropped and taken underwater without worry. The HD video quality is great for capturing the moment; not matter where that moment may be. It's super easy to use, and permits 5-megapixel snapshots when needed. Control manipulation is slightly tricky, but operational with one hand. Playback can output to an HDTV by way of the HDMI output (cable sold separately), and quickly connect to any computer by the high speed USB 2.0 cable. With an MSRP of just $159.99 US, the Playsport Zx5 challenges its predecessors and opponents with a very appealing price tag.