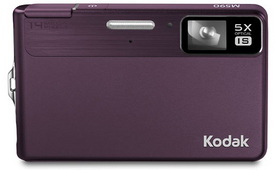 Kodak's flagship M-series model (as of 12/2010), the M590 is a sleek and stylish digital camera that is designed for those seeking an extremely pocketable digicam to tuck into their pocket. With four available color choices options (Purple, Red, Blue, and Sliver), the M590 can match your own personal style. Kodak has incorporated some pretty standard features into this model, including a 14-megapixel sensor, an internal 5x optical zoom lens, 720p HD video recording, and various Kodak technologies (EasyShare, Perfect Touch, Face Detection with Face Recognition, etc.). Like all of their 2010 M-series models, The M590 boasts Kodak's Smart Capture exposure system, which takes all the guesswork out of the photo capturing process by choosing all of the necessary exposure settings as well as the best "Scene" modes option for the shot being framed. This allows you to simply focus on framing your subject and snapping the shot.

Another cool option on the M590 is their "One-button" social media upload function, which allows you to quickly upload "tagged" photos to your favorite social media websites with the press of a button. While the commercials make this look like you can do it from anywhere, the magic doesn't happen until you plug the camera into your PC/Mac using the included USB cable. Still, this is a handy feature that will definitely appeal to those who are very active on Facebook, FLICKR, etc.

The overall design and build quality of the M590 is decent. I The sleek, mostly metal exterior is both pleasing to the eyes, and the pocket. I had no problem sticking this camera in the front pocket of my jeans, thanks to it's maximum thickness or depth of just 0.6 inches. Although thin, the camera can still be comfortable to hold once you find a comfortable technique. I found the "half-pinch" method worked best for me and my large hands, which consists of pinching the left hand side of the camera between your index finger and thumb, which wrapping your right hand around the camera. The controls are positioned within reach of your right thumb, however the buttons along the right side of the LCD are could have been designed a bit better in my opinion. Those with large thumbs like myself will see it's very easy to hit two buttons at once.

The 2.7-inch LCD was a bit of a let down. While it worked well indoors, when you take the camera outside it was quite a different story. While the camera does offer brightness adjustments for the monitor, I found it was very difficult to see my subjects when shooting in bright sunlight. The screens surface is very reflective, and also collects fingerprints easily. The camera's menu is simple and straight forward, which will make it easy for even the most novice of users to navigate.

Image quality from the M590 was disappointing. Exposure seems to be good, however images lack any fine detail and sharpness due to what appears to be a great deal of noise, even when the camera chose it's lowest ISO settings. Colors were also a bit off at times, with the camera capturing a much cooler photo with a bit of a blue tint. Images are also riddled with purple fringing, also know as Chromatic Aberrations or CA for short. The 5x optical zoom covers a pretty narrow field of view when compared to most all other consumer point-n-shoots on the market today, with the wide angle extreme starting at just 35mm. While you'll still be able to capture some nice landscape type photos outdoors, when shooting inside you may find yourself zooming with your feet to fit everyone in the frame; and that's if you have enough room to back up. The telephoto reach of the lens will help you tightly frame subjects for close-up shots, or bring distant subjects a bit closer with 175mm of magnification. Just don't expect to zoom across a foot ball field or basketball court.

Indoor, the M590 didn't perform any better. The tiny built-in flash is quite weak, so you'll want to be sure you're a close as possible. In our example on the samples page, you can see that even from only a few feet away the camera could not properly illuminate two people, producing a mediocre image. The Face Detection system did seem to be quite fast and accurate as far as finding and locking on faces is concerned. I was actually surprised that it was able to find and lock onto faces even when there's an object blocking part of their face; like a camera for example. With the face recognition feature, your favorite "faces" can be saved in the camera using the Tags function in the playback menu. The camera will then recognize a saved face and tag it whenever it comes into the frame; these tags will also carry over when images are uploaded to you social media sites like Facebook, FLICKR or Kodak Galleries.

Like we mentioned above, the M590 offers 720p (1280x720) HD video recording, along with a lower resolution 640x480 setting. Audio is also recorded, and the frame rate of video is fixed at 30fps. Video quality is decent for a compact digicam. Our video clips show usually amounts of compression noise, and play back rather smoothly. Unlike most cameras, the M590 does allow you to use the 5x optical zoom while video is being recorded. The mechanism is slow and quite, so you shouldn't pick up much noise from the zoom in your movies. Like most all digicams, the built-in microphone is quite sensitive, so you'll hear all kinds of background noise if your movies that you likely didn't notice while recording.

Battery life is just under average for a consumer point-n-shoot. Kodak claims the KLIC-7000, 3.7V 830mAh Li-ion battery can power the camera for up to 195 photos. I captured about 100 still photos, about a dozen short video clips (under 30 seconds), and completed many of our other tests before needing to refresh the battery. Therefore, I feel Kodak's quote of 195 frames sounds pretty accurate.

Bottom Line - while I was very pleased with the look and feel of the Kodak EasyShare M590 as well as the overall shooting performance, it's image quality and poor LCD performance results were sub par to even less expensive cameras. The camera is simple to use, and the social media tagging and "One-button" upload features are very cool. However, if the camera can't take a decent picture, it's impossible for use to recommend it. Although the M590 only costs about $199 US or less, we strongly urge consumers to look at other models in the EasyShare line, or from other manufactures.