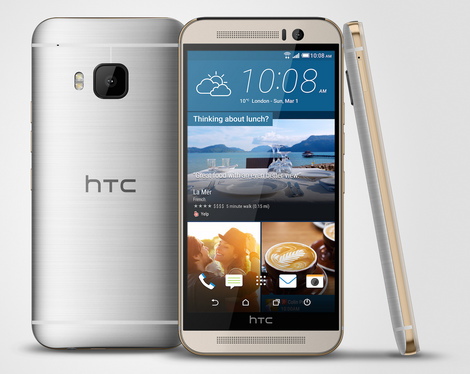 HTC One M9 Preview
The HTC One M9 marks the company's third evolution in designing an elegant smartphone worthy of the Flagship moniker. Available in Gunmetal Grey or dual-tone Gold / Silver, this smartphone is attractive, well designed, and perfectly hand-sized. I'm one of those that holds onto phones until they are about to die, so when comparing the One M9 to my aging iPhone 4S, the One is simply a better fit despite being much wider and taller (they're about the same thickness).
The bright 5.0-inch Full 1080p HD screen is great for emails, web browsing, composing shots for photo/video, or watching streaming content. Further, when the phone's horizontal, dual front-facing speakers give you a nice stereo sound experience enhanced by HTC BoomSound with Dolby Audio. Basically, you get to choose between Audio and Theater Modes, Theater Mode delivering the sensation of 5.1 surround sound kinda like sound bars.
Powered by a 64-bit Qualcomm Snapdragon 810 octa-core CPU with 3GB of RAM, the HTC One M9 runs the Android 5.0 (Lollipop) OS. The 32GB internal SSD can be expanded by an additional 128GB if you separately purchase a MicroSD memory card. As with other Android Devices, you'll find a whole Google Suite of apps as well as access to the Google Play Store where you can purchase and download tons of others. For anyone who has a Gmail / Google account, setting up the phone is almost too easy. Enter your email and password, and the next thing you know the phone has all your contacts, and the calendar app is buzzing to remind you you're late for a meeting.
New for this model year, HTC has introduced HTC Sense 7, which uses Themes to help customize your smartphone by "analyzing your favorite photos to modify the look and feel of your apps, color scheme, and background." It also suggests certain (most used) apps for your home screen.
The HTC One M9, like most smartphones, includes two cameras. A rear-facing "Main Camera" as well as the selfie-and-video-chat-friendly "Front Facing Camera." The Main camera boasts a 20MP BSI CMOS image sensor mated to an f/2.2 27.8mm fixed lens (though there is a digital zoom). This Main Camera can also record up to 4K Ultra HD video in addition to Full 1080p HD. The Front-Facing Camera is a 5MP BSI CMOS image sensor made from UltraPixels that capture 300% more light than standard pixels. These UltraPixels, along with an f/2.0 26.8mm fix lens, and Dynamic Auto Exposure should help the One M9's front camera out perform similar cameras in low-light situations.
HTC's EYE Experience also features Editing software, which can be accessed directly from the camera or HTC's One Gallery.
The last two photo features -- aside from being able to share photos and videos easily from your One Gallery or directly from the smartphone's apps -- are called Zoe and Print Studio. Print Studio is kinda like digital scrapbooking where you can create, and later print, albums for special people or events. Zoe is a new app/community where you can select still photos and video clips, arrange them with music to make a video, and share to all your Zoe friends. The idea is that not only do your friends get to comment and like and share, but they'll have the freedom to remix your videos and repost them in Zoe. If you thought Nana's riverboat gambling slot machines photo journal was already too awesome, just wait until your third cousin drops in a Dubstep soundtrack. Boom!
Speaking of soundtracks, the HTC One M9 aims not only to be a solid phone, camera, web browser, and app playground, but also a digital media hub for the home. As such, it's got the aforementioned HTC BoomSound with Dolby Audio, which is great. The One M9 can also customize audio output to different types of headphones while processing up to 24-bit HD sound. The hub part also means connectivity. We've got WiFi, NFC, and Bluetooth, and with DLNA certification, you can stream content via HTC Connect to all sorts of media devices in your home like smart TVs, AV Receivers, and even wireless speakers.
HTC One M9 Features
Optional HTC One M9 Accessories
What's in the box? 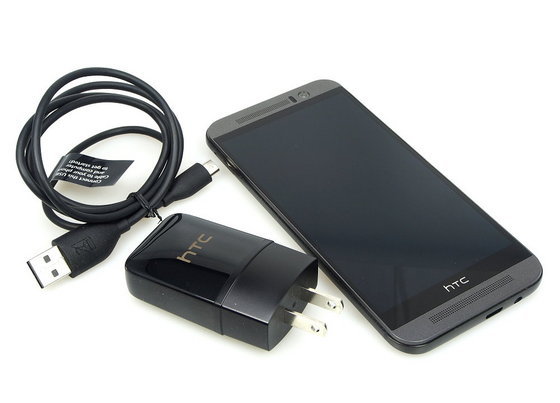 The HTC One M9 is available now -- in Gunmetal Grey or dual-tone Silver / Gold -- through AT&T, Sprint, Verizon, and T-Mobile retailers as well as Amazon, Best Buy, Best Buy Mobile, Costco, and Target. As of today, the full cost of the phone ranges from $599.99 to $709.99 depending on carrier, though this number can be reduced by signing a two-year contract and/or singing up for your carrier's monthly payment plan.
HTC One M9 Product Images