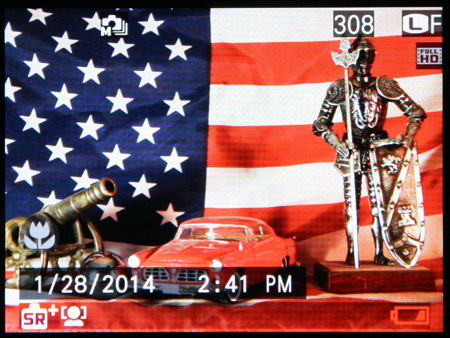 Please excuse the quality of these screen captures. The XQ1 does not come with A/V cables, so we had to photograph the display.

In addition to a traditional full Auto mode (the simplest point-and-shoot mode), the XQ1 includes an SR+ mode, or advanced scene recognition. The shooting mode is indicated in the bottom left corner of the LCD. The scene mode that the camera has selected automatically also appears here, and in this case it is using macro mode. The camera selects one of 11 scene mode settings to apply, depending on what subject matter and conditions it detects.

This is how the screen looks by default when you first turn on the camera or change the mode dial position. After a couple seconds the date/time information goes away, while the rest of the icons (such as the file size and movie frame size indicators at top right) remain.


Program mode is shown here with the information 1 display setting, which is less cluttered of the two info displays. After the date/time information goes away, just the basic icons for shooting mode, exposure compensation, ISO, and battery life remain along the bottom of the screen.

I found one case in which Information 1 is not available in the display menu, and that's when tracking AF is being used. In this case the camera switches to Information 2, and adds the icons discussed in the next screen capture, as well as an AF box.


The Information 2 display, shown here in Program mode, adds a number of icons for various camera settings. At left, the exposure compensation setting is shown; file number, file size and movie frame size are included in the top right corner.

In addition, selection of a white balance setting other than auto or a continuous shooting mode would be indicated by icons along the top of the screen.


Pressing the display button below the four-way control brings up the menu for changing the information display. The menu appears along the bottom of the screen. Pressing the button repeatedly moves the selection icon to the right.

The last selection is the custom setting. There are 13 items you can include.


When you press the shutter button halfway, a white AF box appears on the screen. When focus is achieved the box turns green and the camera beeps.


While using manual focus, turning the control ring around the lens barrel will magnify the area inside the AF box to fill the screen. This image shows the focus peak highlights feature set to high. You can change this to low for less highlighting, or set the manual focus assist feature to standard, with no highlighting.

To help quicken the manual focusing process, you can press leftward on the four-way control to briefly activate auto focus, and then fine-tune the focus using the magnified preview.


Arguably the handiest control on the XQ1 is the E-Fn, or extended function, button. In shooting mode it launches a graphic of the back buttons, each of which can be customized. Once you press a button - in this case the white balance position on the four-way - a menu of icons appear on the left side of the screen. This effectively doubles the number of functions that are quickly accessible via a dedicated button.

For example, I was initially disappointed that continuous shooting modes weren't assigned a position on the four-way control. But it is the default menu selection for the top four-way position if you press the E-Fn button. Also, you can assign some of these functions (including the continuous shooting menu) to the control ring on the lens barrel.

By default, the control ring's function is dependent on the shooting mode. In the default, it serves as a zoom ring in Auto and SR+ Auto modes, but has no function in Program mode. Also in default, it changes the aperture in aperture-priority mode, and the shutter speed in shutter-priority mode.

You can customize the function of the control ring by pressing the E-Fn button and then turning the ring to launch the menu. For example, you can have it serve as a zoom in all shooting modes. But, if you assign it to white balance or ISO, this will only change the setting in PASM modes.

The XQ1 offers a standard assortment of 14 scene modes.

Scene modes:
The advanced filter menu contains just four selections. But they are good selections. The motion panorama 360 feature can capture up to 360 degrees of view into one image, which sounds great in theory. However, in practice I found the feature a little difficult to get used to. On repeated attempts the camera failed to stitch, saying that shooting was interrupted. On roughly my fifth attempt, the camera informed me that I needed to pan more quickly, which resulted in a successful 360-degree panorama.

The pro focus mode presumably takes advantage of the maximum f/1.8 aperture to create an attractively blurred background to help the main subject grab more attention (like DSLRs can do). But the manual also describes this as a focus-bracketing mode, using up to three shots in order to soften the background.

The camera offers 13 filters via the Filter position on the mode dial. As with other mode dial selections, after the above icon indicating your selection has gone away, you can quickly change your filter by turning the control ring (in default setting). When you do, a band of filter icons glides across the bottom of the screen.

The shooting menu is accessed by pressing the menu/OK button in the middle of the four-way control. Once here, you can whisk through the selections using the four-way dial. Despite the small size of this dial, the ridged texture makes it easy to operate.

Note that this is the menu in Program mode. If you are, for example, you have selected filter or advanced filter on the mode dial, the first item on page 1 of the shooting menu will be the list of available filters and effects.

To save you a trip to the menu, many of these settings, such as film simulation, can be assigned to the control dial or one of the E-Fn button positions.

However, you do need to enter this menu to customize the E-Fn button positions (playback, movie record, and the four positions on the four-way control). One of 14 functions can be assigned to each of the six positions.

The setup menu offers three pages of global settings. Most are typical, such as date/time and language. Note that here on page one that you can set the control ring's orientation to be clockwise or counterclockwise. And, the MF focus check feature (which magnifies the on-screen preview when you turn the control ring) can be turned on and off.

This is also where you turn other features such as red-eye removal, image stabilization, and digital zoom on or off. Also, by default, images sent to a smartphone are resized to 3 megapixels, but you can turn this off and send full-size images.


When recording movies, the display shows minimal information, such as movie frame size and video duration left on the SD card. If I had not increased exposure compensation, the indicator at left would not be on screen. Regardless of which information display you have set for still images, the move record screen appears as above. The only exception is the custom display, which will show an electronic level for recording video.