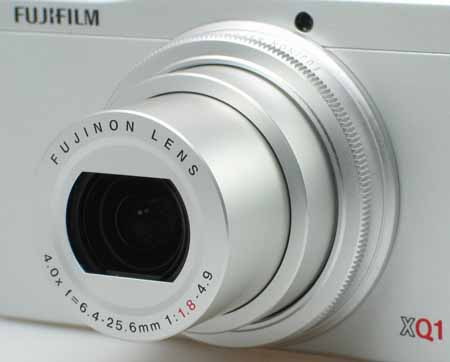 The 12-megapixel XQ1 has a modest 4X optical zoom lens (25mm-100mm, 35mm equivalent). At wide angle, the lens offers an impressively wide maximum aperture of f/1.8, though at telephoto it is a more modest f/4.9. At wide angle, this large aperture is helpful in getting attractive shots in low light and preventing camera shake by enabling a faster shutter speed.

For macro photography, the camera is able to focus as close as 1.1 inch (3 cm) from a subject at wide angle. This isn't top of the heap, however - there are point-and-shoot cameras that can get as close as 0.4 inch (1 cm). Still, this ability should help you capture sharp nice close-up photos.

The XQ1 has a 2/3-inch X-Trans CMOS II sensor, able to capture high-speed continuous shooting (up to 12fps at full resolution) and full HD movies.


What would be a zoom ring on an SLR camera, Fujifilm calls the "control ring". This toothed ring at the base of the lens barrel is aptly named because it can control more than just the zoom, and is customizable. This gives you quick access to settings and, for example, switching scene modes without having to navigate a menu.

But as a zoom ring, it offers a less-than-stellar experience. The zoom motor is a little sluggish to respond, which doesn't really make it a better option than the zoom ring surrounding the shutter release button. Trying to get from wide angle to telephoto tended to take me three or four turns - when recording a movie this made for a shaky video that was slow to zoom in and out. I got smoother results by turning the little zoom ring up top.

In its default setting, you could argue that the control ring performs the most vital function for the given shooting mode (except for in Program mode, when it oddly does nothing).

Default control ring function (by shooting mode):
You can assign the control ring one of seven other functions, as long as you're using auto focus. When you switch to manual focus, the control ring becomes a traditional focus ring. When you turn it, the on-screen image magnifies to help you focus. And, you can press leftward on the four-way control to activate auto focus briefly.

The XQ1's 3-inch LCD offers a sharp 920k-dot resolution, and it's sufficiently bright for almost all situations. There is a monitor sunlight mode that brightens the display in bright light for easier reading. The screen is fixed and does not fold outward.

At the top right of the back panel is a small rubberized thumb pad with a lip that helps you keep a firm grip on the camera.

The mode dial offers 10 positions, including one for custom settings.


The pop-up flash springs upward from the top panel when you flip the switch just behind it. The camera does not have a flash shoe for use with an external flash.


The small flash scatters a lot of light for its size. The company specifies its range at wide angle as up to 24 feet, though in my shots there was a noticeable drop-off in illumination around 15 feet or so. Nonetheless, shots taken in small to medium-sized rooms were well lit, and only in bigger interiors did the flash fail to bring out the background sufficiently.

Below the thumb pad on the back panel sits the majority of the camera's controls: four buttons and a four-way control. Note that the four-way positions double as buttons and a dial for easy navigation.

The playback and movie record buttons sit above the four-way control. The display/back and E-Fn (extended function)/Wi-Fi buttons sit below. The E-Fn button serves to double the number of settings you can quickly access in shooting mode. Pressing it brings up a graphic of the secondary function of each button and four-way control position.

For example, at first glance, I was disappointed that the XQ1 did not have a dedicated four-way position for continuous shooting, which is not included in the self-timer menu (downward on the four-way control). But by pressing the E-Fn button, upward on the four-way becomes the continuous shooting menu button. Better still, these E-Fn positions are user-selectable, so you can assign each button one of your most-used settings for quick access.

In playback mode, this button launches the Wi-Fi function for transferring images to a PC or smartphone outfitted with the corresponding application. This function was easy to setup with an Android smartphone, connecting directly with no need to enter the password for my home network.


There is just one port on the XQ1, a combination USB/AV port sitting behind a small flap on the side of the camera, around the corner from the thumb pad. The camera does not include A/V cables nor an HDMI cable for viewing photos on a TV.


The Li-ion battery is charged in the camera, using the included USB cable and power adapter. At press time, no optional battery charger was listed on the company's website. So, even if you picked up a second battery, you'd be unable to charge the first one while shooting with the backup.

The battery is rated to last 240 shots, which assumes 50 percent flash use per CIPA rating. In my testing, the battery lasted longer, but not extremely so considering that I took few flash shots and a fair number in burst mode. The battery lasted roughly 460 shots, plus a few short videos.

Other accessories include the WP-XQ1 waterproof case and a remote release.