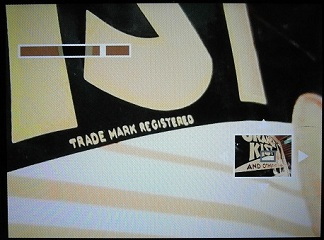 Please excuse the poor quality of these screen captures. The XF1 kit does not include an AV output cable, therefore we had to photograph the display screen.
To see the images you have stored on the camera's memory card, press the Playback button on the back of the XF1. You can see as much or as little of the data about each image as you want by pressing the Disp/Back button, which will call up the Information menu along the bottom of the screen, through which you can choose what information is displayed.
The main Playback screen includes the file number, resolution, aspect ratio, and dynamic range in the upper right corner. Along the bottom of the screen, from left to right, you'll see the date and time of the image, the shutter speed, the aperture, and the ISO setting.
Pressing the Disp/Back button allows you to turn off all of the data, making it easier to view the image in its entirety.
Press the XF1's Disp/Back button again to select Detail Information, and you'll see the image shrink toward the right portion of the screen, and a histogram will appear under the image. On this screen, you'll still see the file number in the upper right corner. Along the left side of the screen, you'll see the following settings about the stored image (from top to bottom): Dynamic range, resolution, aspect ratio, ISO, shutter speed, aperture, film simulation, flash, white balance, EV, and date and time.
Finally, to see extremely detailed information about each image, press the E-Fn button with an image on the XF1's screen. You'll see a list of settings that's two pages long about each image.
If you're like most photographers, you'll quickly have the XF1's memory card filled with images. To be able to scroll through the images more efficiently in Playback mode, you can see multiple images on the screen at one time, and then use the four-way button to scroll through the images.
With one image on the screen, turn the command dial (in the upper right corner of the back panel of the camera) to the left, and you'll see one image centered in the display with two smaller images on either side. Continue turning the command dial to the left, and the scene will change to a 2x2, 3x3, and 10x10 view. Press the OK button to bring the highlighted thumbnail image to the full screen view.
You also can use the command dial to magnify a portion of the single image on the screen. Turn the command dial to the right to begin the magnification process. You can see the overall image in the lower right corner. Fujifilm included 20 precise magnification levels with this feature in the XF1.
The Playback menu gives you access to the XF1's features for controlling how the images stored on the memory card are treated. Just press the Playback button followed by the Menu/OK button to open the Playback menu.
With an video on the screen In Playback mode, you can see some data about the video. The main video screen contains information, including the file number and video resolution in the upper right corner, along with the date and time the video was shot in the lower left corner.
Press the Disp/Back button to remove all data from the screen. Press the button again, and you can see detailed information about the video. The video shrinks to occupy the right side of the screen, along with a histogram. Along the left side, you'll see the video resolution, film simulation setting, white balance, EV setting, and time and date. For some reason, Fujifilm chose not to include the length of the video anywhere in the data in any mode.
To play the movie on the XF1's LCD screen, press the downward button on the four-way button. As the video plays, you'll see a timing bar across the top of the video that shows how much of the video has been played. The amount of time expired is shown in the upper right corner, too. Use the up four-way button to stop the video and the down four-way button to pause the video.