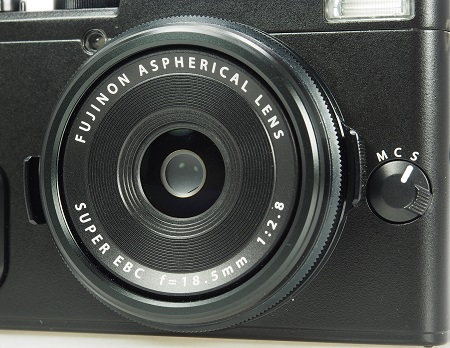 Five flash modes are available with the built-in flash: Forced flash, slow synchro, commander, auto, and suppressed flash. You also have an option of using an external flash mode.

The LCD screen Fujifilm included with the X70 is of a high-quality, measuring 3 inches diagonally with 1.04 million pixels of resolution. It's extremely sharp. I did find it easier to see the screen in glaring sunlight when I bumped up the brightness level a couple of stops.
It has a touch screen ability too, which is great for helping inexperienced photographers learn to use the camera more quickly. You can set up the touch screen in shooting mode to record photos or to set the autofocus area, if you want.
Just above the LCD screen are two buttons, the Delete button and the Playback button. You can see the photos stored on the memory card by pressing the Playback button, as well as access the Playback menu. Use the Delete button to remove photos stored on the memory card.
The Delete button is one of the eight function buttons to which you can reassign its setting through the Setup menu.
Fujifilm gave the X70 a tiltable screen too, which can help with odd-angle photos. The screen tilts at any angle up to a full 180 degrees, where you can hand hold the X70 and shoot selfies. You also can swing the LCD to a 90-degree angle, which works well when shooting with the X70 attached to a tripod.

The right side of the back of the camera contains another set of control buttons and dials. Toward the top is a command dial, which you can use to scroll through settings more quickly or with the Q menu (which we'll discuss in more detail on the next page).
I have to mention here that these shortcut menus are the default settings for these individual buttons. Each of these four buttons is one of the eight function buttons where you can change the setting associated with it through the Setup menu. Because you can make changes to these buttons' tasks, Fujifilm chose not to label them.
In the middle of the four-way button is the Menu/OK button. Press this button to open the camera's primary menu. Or press the Menu/OK button to accept a change you've made.
Along the bottom are the Disp/Back button, which you'll use to change the data displayed on the screen when shooting photos or when reviewing stored photos, and the Fn button, which is defaulted to open the Wi-Fi connection screen. As with the other seven function buttons, you can assign this Fn button to any of 24 settings through the camera's Setup menu; I'd recommend making this button the movie recording button to avoid the problem discussed above. Just remember that any changes you make to the Fn button's settings will only apply to pressing it when you're in a shooting mode. It will remain the Wi-Fi connection button in Playback mode.

The right side of the X70 has a series of ports behind a compartment door. The microphone remote port is at the top with the HDMI port in the middle and the USB port at the bottom.


The left side of the X70 doesn't contain much of interest, but the unmarked, tiny round button displayed here in the middle of the panel is one of the eight function buttons to which you can assign a setting.
Fujifilm included a battery and memory card compartment on the bottom section of the X70. The compartment door latches with a toggle switch and has a spring hinge.
You'll charge the battery in the separate charger Fujifilm included in this kit.
Fujifilm estimates the X70 camera can record 330 shots per charge. My tests found that number to be a high estimate, as I was receiving about 240 to 260 shots per battery charge under real world conditions.