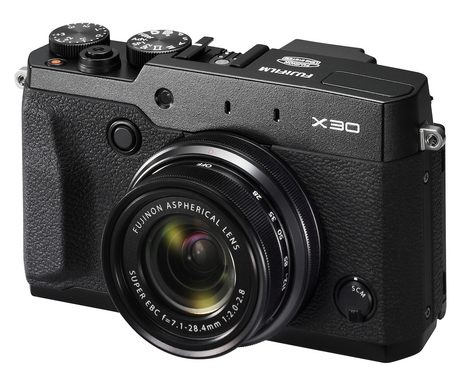 Fujifilm has announced a new "premium compact, fixed lens camera aimed at enthusiast and professional photographers." The X30 features an all new 2.36M dot, real time OLED viewfinder that is not only the largest and fastest viewfinder in its class, but also automatically controls brightness based on ambient light levels. There's also a large 12MP 2/3" X-Trans CMOS II sensor mated to a 4x FUJINON manual zoom lens with a maximum aperture range of F/2.0-2.8. The EXR Processor II makes the X30 extremely fast, with 12 frames-per-second High Speed Continuous Shooting (up to 11 frames at full resolution in JPEG), a 0.06-second Intelligent Hybrid AF (AutoFocus), a half second start-up time, and a 0.01 second shutter lag time.
Video recording capabilities are a top tier Full 1080p HD at 60 frames-per-second at a higher-than-most-Blu-rays 36MBps bit rate. You can use the manual focus during recording, and there's even an input for an optional microphone. A 3.0-inch tilting LCD display helps users easily frame shots.
Other fun features include a "Classic Chrome" and other film simulation modes for capturing the look of older film cameras from the sixties and seventies, Super Macro Mode for extreme closeups, Motion Panorama 360 for epic vistas, and Interval Timer Shooting for creating your own time-lapses, which will be possible thanks to the new battery can capture approximately 470 shots per charge.
Lastly, if you download the free Fujfiilm Camera Remote app for your smartphone or tablet (iOS or Android), you'll be able to use the X30's Wireless Communication Function to adjust menu settings and release the shutter.
FUJIFILM X30 Features:
Optional X30 Accessories
The FUJIFILM X30 will be available in late September (2014) in black or silver with a $599.95 MSRP.
Additional Product View