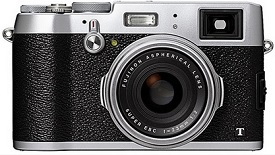 When Fujifilm introduced the X100 digital camera in 2010, this retro camera design certainly turned heads. Its extensive collection of dials, switches, and buttons gave advanced photographers the type of control that they loved to have with film cameras. And its physical resemblance to those old film cameras gave it plenty of attention.
A few years later Fujifilm announced the next version with the same retro design, the X100S digital camera.
Now Fujifilm is offering the X100T digital camera, which maintains the same design and look of its predecessors. While this model probably isn't turning heads quite as often anymore based on its looks, Fujifilm has beefed up the X100T's photographic capabilities versus the original in many areas, including:
One area where the X100T maintained an interesting feature from its predecessors is with the hybrid viewfinder, which offers a mix of an optical viewfinder with an electronic viewfinder. You'll switch between modes by using the View Mode button on the back of the camera. This is a really cool feature that allows you to switch between the EVF, optical viewfinder, and LCD to frame each scene with the best possible method, depending on your needs.
Unfortunately, the placement of the viewfinder in the upper left corner of the back panel means that your nose is going to be pressed against the middle of the LCD screen when looking through the viewfinder with your left eye. Be prepared to remove a lot of smudges from the LCD after using the viewfinder ... or to train yourself to use the viewfinder with your right eye.
That's just one of the quirky design features that has a good/bad element. For example, while it's nice to have an EV dial on the top of the camera, I occasionally found after shooting a series of photos that I had inadvertently twisted this dial to a -1 or -2 setting after bumping the camera while moving it around, leaving my shots improperly exposed. And while the power toggle switch on the top panel is easy to access, it's also easy to activate the switch as you remove the camera from a pocket or a camera bag, leading to wasted battery power. So you have to accept some problems alongside some of the X100T's cool design elements.

Once you move past the interesting design of the Fujifilm X100T, you'll next notice the strong image quality with this model. Fujifilm gave the X100T an APS-C sized image sensor, which is similar in size to what you might find on some DSLR cameras.

As you would expect with such a large image sensor, the image quality with the X100T is outstanding in nearly all shooting situations. No matter what type of lighting was in the scene, the X100T seemed to excel. The X100T can record images in JPEG alone, RAW alone, or JPEG and RAW at the same time.

This model's image quality is especially strong in low light, thanks to the large sized image sensor. Shots taken throughout the X100T's ISO range are very good, and there's minimal noise at upper end ISO settings.

With the camera's prime f/2 lens, you can shoot with a very small depth of field, which is great for shooting portrait photos with a blurred background, which is where the X100T especially hits its stride. And the f/2 aperture setting allows a lot of light to enter the camera and strike the image sensor, again emphasizing the X100T's great performance in low light situations.

The tiny flash that's embedded in the front panel of the camera works better than I would've expected, although you may want to attach an external flash to the camera's hot shoe for some scenes.

The prime lens with the X100T offers a 35mm equivalent focal length setting, which is a mid-range focal length setting, fitting nicely between wide angle and telephoto settings. However, Fujifilm chose not to give this model's lens any optical zoom capability, which some photographers will dislike quite a bit, as it limits the flexibility of this camera's usage scenarios. You can add conversion lens adapters for a 1.4x or 0.8x magnification for an additional price.

Photo sharpness is outstanding with this model, too, as the autofocus mechanism works very accurately in nearly all shooting scenarios. Fujifilm removed the anti-aliasing filter from the APS-C image sensor to provide images with especially sharp details. It isn't the fastest autofocus mechanism on the market in certain scenes, but this camera also really isn't aimed at photographers looking to shoot action photos. You have the option of using manual focus with the X100T, although the autofocus works so well, you probably won't use manual focus too often.

Advanced photographers who are interested in the manual focus option also are sure to make use of the numerous manual control features Fujifilm has included with the X100T. This camera has a host of dials and buttons to give you plenty of ability to control the shot. You can program seven function buttons on the X100T, placing commonly used commands just one button away. Such personalization features are great, because the on-screen menus are a bit confusing to work through and aren't particularly well organized. Fujifilm did include a Q button that leads to a quick settings screen, which works well for making quick changes to more than a dozen common settings.

If you often shoot with bracketing, you'll appreciate the X100T's Drive button, which provides access to two continuous shot modes, as well as bracketing for AE, ISO, film simulation, white balance, and dynamic range. It's handy to have such options available through a single button.

Fujifilm added film simulation modes with the X100T, which are great for creating special effect photos. You'll have a number of special effects from which you can choose, including chrome film simulation and panoramic photos. The camera has a built in neutral density filter, and you can use the built-in intervalometer as well.

The X100T has a very sturdy feel. It's a heavy camera for its size, giving you an additional clue as to its build quality, although Fujifilm didn't give the model any weather proofing features. It's a little thick to fit comfortably in a pocket. And if you do choose to slide it into a pocket, be sure to check all of the settings on the dials before using it to ensure none of them were rotated out of place as mentioned earlier.

Battery life is really good with this camera, especially if you choose to frame photos using the viewfinder, turning off the LCD screen. You can expect a minimum of 300 shots per charge, although you could receive twice that many when using the viewfinder exclusively. You can charge the battery in the included charger, which is handy should you choose to employ a second battery, allowing you to shoot photos with one battery while the other is charging.

Bottom line - The Fujifilm X100T offers a lot of great advanced photography features packed into a retro design that will remind you of the stylish film cameras from the past ... or of the two previous models in the family -- the X100 and the X100S -- as all three cameras look a lot alike. Fujifilm focused its attention on the X100T by upgrading photographic capabilities, giving this model quite a few advantages over its predecessors. If you really like viewfinders in your cameras, Fujifilm's hybrid viewfinder design is one of the most interesting options on the market in any type of camera, giving you both optical and electronic viewfinder capabilities in one unit. Image quality is outstanding with this camera, no matter what type of lighting you encounter. Ultimately though, the X100T isn't the most flexible camera on the market, primarily because it has no optical zoom lens, offering only a 35mm equivalent focal length setting. This model is great for portrait photos and for landscape photos, but it isn't going to help you much with action or wildlife photography. Even though this model has no optical zoom, the fast f/2 lens is of an outstanding quality. A few of the camera's design elements are a little quirky, but all of the customizable buttons and dials are great for the advanced photographer who likes to personalize his or her gear. Fujifilm introduced the X100T for an MSRP of $1,299; the same price point at which the other two models were introduced. The lack of an optical zoom lens and the high price tag will drive the X100T well out of reach of most photographers. But if you have a photographic need for shooting impressive portrait photos in a fixed lens model, it's tough to beat the X100T's overall package of an interesting retro design, advanced features, great image quality, and a great viewfinder in the advanced fixed lens category.