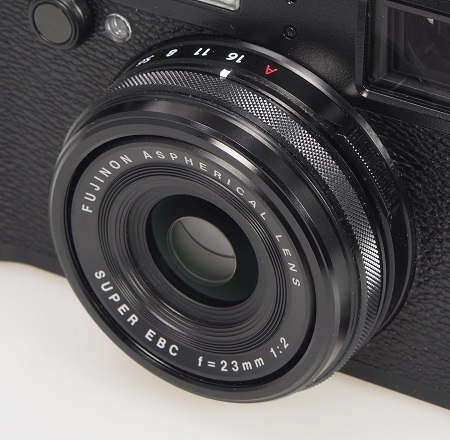 Fujifilm include a 16.3-megapixel APS-C CMOS image sensor (23.6 x 15.6 mm) with the X100T camera, which is a far larger image sensor than you'd normally find in a camera body of this size. Many DSLR cameras use APS-C sized image sensors, so you would expect the X100T to create very impressive image quality, and it does.
Fujifilm chose to include a 23mm prime lens with this camera (equivalent to 35mm). Many advanced fixed lens cameras with large image sensors often at least contain a minimal optical zoom capability.
The X100T's lens is a fast f/2 lens. When the fast lens is combined with the large image sensor, the Fujifilm X100T excels at low light photos and at portrait photography, especially where you want to shoot with a shallow depth of field and blur the background.
You can see the available aperture settings at the top of the lens in this photograph. The aperture ring has raised areas on opposite sides of the rings to give you a spot to grip with your fingers. (You can see this raised area just to the right of the A setting in this photograph). Aperture settings on the aperture ring range from f/2 to f/16, along with an A for an automatically created aperture setting. The white mark on the lens housing indicates the current aperture setting.
With the X100T, you'll be able to set the aperture to 1/3 stops between each aperture setting printed on the ring. As you turn the aperture ring, the current aperture setting will appear on the LCD screen.
The camera's autofocus range is:
Three focus options are available through a toggle switch on the left-hand side of the camera: Single AF, Continuous AF, and Manual focus. The Fujifilm camera remote app allows you to focus using your smartphone, too, when you're operating in wireless connectivity mode.
The lens cap Fujifilm included with the X100T doesn't screw onto the lens housing. Instead it's a hard plastic cap that slides over the lens. Even though it doesn't screw onto the camera, it fits tightly, and I didn't have any problems with it popping loose while I was transporting the camera.
To make use of a lens filter with the X100T, you would need to unscrew the ring at the front of the lens. Then attach an adapter. Fujifilm also offers focal length adapters with this model for an additional price to provide a slight change to the camera's fixed focal length.
Unlike many advanced fixed lens cameras, the Fujifilm X100T has a flash that's embedded in the front panel of the camera body, which limits its angle to the scene. Still, it worked better than I would have expected. Despite the embedded flash, the camera's lens is thin enough that I didn't really experience vignetting problems during my flash photo tests. The built-in flash range for this model at ISO 1600 is:

Five flash modes are available: Forced flash, slow synchro, commander, external flash, and suppressed flash. Flash compensation is available in 1/3 stops from -2 to +2. A red-eye reduction feature that you can activate through the on-screen menus will affect the flash power too.

Fujifilm did not give the X100T a mode dial on the camera's top panel, which may be a little confusing at first. Rather than setting the shooting mode via a single mode dial, you'll determine the shooting mode by the various settings you select.
At the far left of this photo is the hot shoe, allowing for connection of an external flash unit.
The dial to the right of the hot shoe is the shutter speed dial, allowing you to set the shutter speed manually between 1/4000th of a second and 1 second. A indicates an automatic shutter speed chosen by the camera. T allows for a shutter speed between 2 and 30 seconds. B indicates the bulb setting, where the shutter could remain open for up to 60 minutes, as long as you are holding down the shutter button. The white mark indicates the current shutter speed setting.
The shutter button is up and to the right of the shutter speed dial. It's surrounded the power switch ring. While the X100T's shutter button is a little smaller than with most cameras, it has an indented ring in the middle of the button, and that textural change on the button's surface makes it easy to find the shutter button when you're blindly reaching for it while looking through the viewfinder.
To the right of the shutter button is one of seven customizable function buttons on the X100T. The default setting for this button is movie recording. And below the function button is the EV dial, allowing for settings between +3 and -3 at 1/3 increments.
Because of the way the EV dial and power switch slightly hang over the edge of the camera body, don't be surprised if you inadvertently move these dials and switches while transporting the camera into and out of a pocket or a camera bag.
Fujifilm gave the X100T an impressive LCD screen. I like the 3:2 aspect ratio of this screen, which is noticeably wider than the 4:3 ratio LCD screen found on many cameras. The screen measures 3.0 inches diagonally and offers 1.04 million pixels of resolution.
The hybrid viewfinder system that Fujifilm created with this family of cameras is an interesting one. (The X100 and X100S preceded the X100T.) The viewfinder is in the upper left corner of the back of the camera, while the viewfinder switch is on the front of the camera, as mentioned earlier.
You can shoot in an optical viewfinder mode. The optical viewfinder has a 0.5x magnification and captures about 92% of the scene that's visible through the viewfinder, as part of the viewable scene is obstructed by an edge of the lens. The LCD screen and optical viewfinder both can be used at the same time.
There's also an electronic viewfinder option. When it's activated, the camera extends a cover over the front of optical viewfinder, and a digital image is displayed in the viewfinder window. This electronic viewfinder offers a very sharp 2.36 million pixels of resolution in a 0.48-inch area, and it offers approximately 100% coverage of the scene with 0.65x magnification.
You can just see the View Mode button in the lower left of this photo, which allows you to switch between the various viewfinder/LCD screen modes, which are:
While in Eye Sensor mode, press the View Mode button to return to Viewfinder Only mode again. Press it one more time to return to LCD Only mode.
These different viewfinder/LCD combinations are enjoyable to use, giving you plenty of versatility, although it may take a bit of trial and error on your part to figure out which combination works best for your photography needs. The biggest disadvantage to using the viewfinder is that if you use you left eye to look through the viewfinder, its positioning on the camera will force you to press your nose against the LCD screen, which will leave smudges and which can be uncomfortable if done for long stretches of time. You may want to learn to use your right eye to look through the viewfinder with this camera.
Four buttons are available to the left of the LCD screen on the back panel of the camera.
To the right of the Drive button is the command dial, through which you can control various settings while shooting, including the shutter speed, aperture, and the settings in the Q window. This command dial is well placed for use with your right thumb.
Just below the command dial is the AEL/AFL button, allowing you to lock in the autofocus or auto exposure.
The Q button gives you quick access to a variety of the camera's settings in a handy-to-use grid.
The four-way buttons surround the Menu/OK button, and each of the four-way buttons can be set to a particular camera function.
Finally, the Disp/Back button at the bottom of the camera body changes the information displayed on the screen or allows you to back out of various menus.


The toggle switch on the left-hand side of the camera allows you to set the focus mode.

The compartment on the right-hand side of the camera includes three ports.
The bottom compartment of the camera contains the battery and SD memory card slots. The compartment door is constructed of hard plastic and is hinged. It also has a toggle switch lock.
Fujifilm included a separate battery charger with the X100T, which is handy versus having to charge the battery inside the camera. Fujifilm estimates the X100T's battery can record 330 shots per charge, and my test found that number is pretty accurate. Battery life can be significantly better if you use the optical viewfinder more often than the LCD screen to frame photos. You'll also find a USB cable and shoulder strap with this camera's kit.