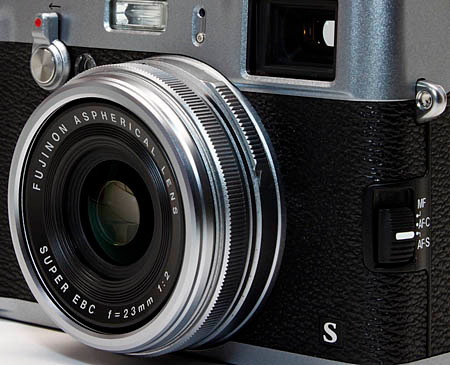 One of the highlights of the X100S is the fixed, Fujinon 23mm, f/2.0 lens. Sporting a 35mm equivalent of 35mm, the X100S truly takes you back to the days of the original rangefinder camera. The lens itself is made up of 8 elements in 6 groups, including a high-performance double-sided aspheric lens and Super Electronic Beam Coating to give you the maximum quality and least amount of blemishes possible. Around the lens are two rings, one for manual focus and the other to control the camera's aperture. On the left side of the camera you can see the focus mode switch.
Focus Range:

Fuji's 16-Megapixel Trans-X CMOS II image sensor features a random pixel arrangement that allows them to eliminate the optical low pass filter, increasing the sharpness of your images. Also built-in here is the phase detection sensor that works with the camera's contrast detection for faster and more accurate auto focus. These features are all combined with the EXR II image processor, which is very powerful. It reduces image noise and helps to create sharper images with the Lens Modulation Optimizer.

On the lens you can see the focus ring and aperture ring. With the camera not having an auto mode or other shooting modes, you can set both the aperture and shutter speed to "A" to use its program mode. Other than that, this is not a camera for beginners, with some photography experience being necessary.

Fuji's super intelligent flash unit is small and not very powerful, but can be very useful in certain situations when an external flash is not present. With a range of up to approx. 29ft at ISO 1600, its the camera's amazing image quality at high ISOs that allows this flash to fill a decent sized room or light a large group image.
On top of the camera you will see the precision rangefinder controls. Starting at the left is the camera's hot shoe followed by the shutter speed dial. Next is the On/Off switch which is coupled around the shutter release and the Fn button. The Fn button is programmable to operate any one of the numerous camera settings. Finally is the exposure compensation dial. The two dials on top are not too easily moved so they don't get bumped and changed too often. Its still wise to always check.
Framing, composing and viewing your images is accomplished with either the 2.8-inch LCD or the Hybrid optical/electronic viewfinder. When using the 2.8-inch, 460,000 dot LCD screen, you will be pleased with its resolution and brightness. It makes for easy composition and viewing any time. It does look rather small on the back of the camera when it is in your hands though.
Using the viewfinder switch on the front of the camera allows you to instantly switch between the optical and electronic viewfinders. With the optical viewfinder you will get faster shutter lag times the basic shooting information is shown in the OVF. For the full amount information found on the LCD screen, the EVF, which features 2.3-million dots, gives you amazing clarity and detail. On the left of the OVF/EVF combo you can see the dioptric adjustment.
Controls Left: From top to bottom you have the Playback button, Auto Exposure and Drive Mode buttons, which double as the zoom controls in playback mode and the view mode. The view button switches the camera from LCD to viewfinder mode.
Controls Right: On top is the command dial, followed by the Focus and Exposure lock button. In the middle is the 4-way controller, providing shortcuts for the auto focus, flash, WB and Macro settings. There is also a dial around the controller for faster and easier menu navigation. In the center is the Menu/OK button which accesses the menus and makes your selections. On the bottom is the DISP/Back button which changes the info shown on the LCD screen or backs you out of the menu screens. Finally at the bottom right is "Q"uick menu button, taking you to a menu, much like you would see on a dSLR with all of the camera's shooting settings available.
Hidden under a door on the right side of the camera are the IO ports. On top is a USB 2.0 port that allows you to quickly transfer images to your computer. On the bottom is a HDMI output to send high definition images and movies to any HDTV directly from the camera.
The X100S features a small internal memory that only allows you to capture 3 Large, Fine quality images. The camera also accepts SD/SDHC/SDXC memory cards to store your images. The camera is shown above with a 4GB, class 10 SDHC memory card that was provided by Fujifilm for our tests; however it is not included with the X100S when purchased. Our performance tests will be performed using a SanDisk Extreme Pro UHS-1 (95MB/s) SDHC card.
Powering the Fujifilm X100S is a 3.6V, 1700mAh rechargeable Li-Ion battery. Fuji claims that it will provide enough power to capture up to 330 images on a fully charged battery. It does not, however, say if this is using the LCD, EVF or OVF. There may be a lot more or a lot less to this number than they are letting on. Also included is the quick charger shown above, which makes it easy to keep spare batteries charged and on hand.