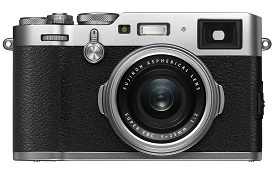 The Fujifilm X100F is a strong portrait and low-light camera. But the price tag is so high, despite its strong photographic capabilities, most people will think twice about purchasing one. After all, you can easily find an entry-level DSLR with a few lenses for that price. The Fuji X100F simply isn't going to appeal to someone as a first digital camera. But for the advanced photographer who knows exactly how to take advantage of the X100F's specific features to create certain kinds of photos, this prime lens camera has a lot of strengths in a cool looking body.