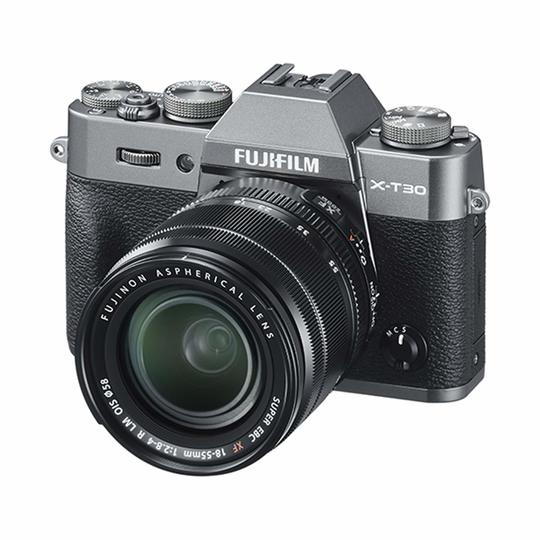 Editor's notes: the Fujifilm X-T30 will release on March 20, 2019. For this article, Fuji loaned us a preproduction body with preproduction firmware. We'll update this hands-on first look to a full review after we've used a production body. Also, if you choose to use any of the affiliate links on the page, Steve's Digicams earns a small commission at no additional cost to you.

What We Love. Right off the bat, we can't help but be impressed with the new Fujifilm X-T30's autofocus, which feels slightly better than the remarkable X-T3 and performs with uncanny accuracy even when a subject is far away. The X-T30 also boasts supersampled 4K video recording at up to 30 fps, the DCI video format for a more cinematic look on 4K videos, F-log recording, the Eterna color profile, a better grip on a familiar compact body so it's easy to carry and handle, and a minimal back design with the joystick replacing the multi-selector buttons for more straightforward user interface. It also has a new sensor with more effective pixels than the X-T20 as well as a better processor.

What We'd Change. While the Fujifilm X-T30 has all the makings of an awesome APS-C camera, it does leave a few things to be desired. Low-light performance needs improvement; autofocus is a little wobbly when there's not enough light, and noise handling isn't great. On the video side, it lacks 4K at 60 fps, and, like the T3, it's also missing the X-H1's 5-axis in-body image stabilization. IBIS may not have been necessary with the T3 because of its target market, but we do feel that it would be a convenience for T30 target users who may not even know what a gimbal is. Other minor things we'd change are the LCD monitor, which only tilts in two directions (up and down), and battery life, which only lasts around 380 stills (or 45 minutes of 4K video). Lastly, we'd recommend skipping the XC15-45mmF3.5-5.6 OIS PZ kit lens if you can afford it; it's not horrible, but it's the weakest part of this camera.
Pick This Up If... you're a beginner or casual shooter looking for an affordable body with plenty of lens options and several features geared towards advanced users or if you're an advanced shooter looking for a compact, lightweight camera you'd like to take on your travels.
or