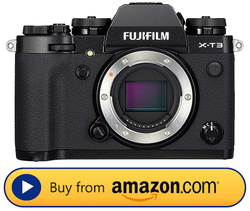 For a full gallery of SAMPLE IMAGES,
make sure to check out our Steve's Darkroom blog post,
Traveling to Seoul & Los Angeles with the Fujifilm X-T3
The Good. With a new 26-megapixel X-Trans CMOS image sensor and the new X-Processor 4, the Fujifilm X-T3 processes, focuses, tracks, and transfers dramatically faster than its predecessor, the X-T2. The AF has also been upgraded, from 325 focus points to 425, with 2.16M total phase detection pixels, not to mention a better face detection. The X-T3's powerful, low-power consumption processor also improves 4K video capabilities with more cinema-quality specs than the flagship X-H1. And the battery life is slightly better at 390 shots (up from 340 shots). Weather resistance is also present. Continuous shooting is at 20fps at full resolution, 30 fps at about 25% resolution reduction. All that for only $1500... make the X-T3 a powerful bargain.
The Bad. It's hard to complain about a camera that, at $1,500, comes with this many bells and whistles and pro-quality features for photographers and videographers need. But there are a couple of flaws. The non-deal-breaker is the missing IBIS, which helps smooth out videos and extends low-light photography, although the truth is no IBIS will give you true gimbal-smooth performance. The two things that might actually make the X-T3 a deal breaker are 1) autofocus performance (it's improved but suffers in low-light) and 2) ISO performance (noise handling isn't the best).
The Bottom Line. Fujifilm has fully loaded the X-T3 with a better engine and several new features under the hood so it's faster not just in processing images, but also with its autofocus, tracking, and frame rates. It also has more video capabilities, weather sealing, and a slightly better battery life. The AF accuracy isn't as good as we hoped, especially in low-light situations, the noise handling could be better, and our handheld videos are a pain to look at. But considering this is a $1,500 camera with family of great lenses at its disposal, we are happy to make allowances.
Pick This Up If... You're a casual shooter looking to upgrade your X-T2 or X-T20 and need something lighter and more compact than the X-H1. Pro shooters and videographers will also appreciate this as their B-camera.

INTRO
Fujifilm's X-T2 was definitely due for an update, and we're happy to report the X-T3 has upped the ante and comes packed with upgrades, from its new quad-core processor and its 26MP backlit sensor to its plethora of cinema-quality spec video capabilities and other new features. Think of a hybrid between the X-T2 and the X-H1, but faster, just a little better, and ever so slightly more affordable, and you've got the new X-T3.
This new APS-C body is light and compact, with a design that's easy to handle, intuitive to use, and boasts weather sealing Fuji promises will withstand downpours and temperatures down to 14F. Its image performance is impressive too--the images are crisp and detailed, the color rendition is beautiful and accurate, and the dynamic range is pretty good.
The videos are great too, and they would have been better if it had an IBIS. According to a couple of Fuji in-house experts we chatted with at this year's Fujifilm Festival, Fuji opted to skip IBIS to keep the body compact, leaving it up to the H1 to satisfy the IBIS need of the many.
Are we impressed? You bet! The X-T3 is so good we couldn't believe it was only $1,500. It's not perfect, and it does leave a few things to be desired especially if you're used to a body with IBIS, a more accurate autofocus, and a better ISO performance. However, at that price point, it's one of the best deals available in 2018.
GEAR USED
We tested the Fujifilm X-T3 out in Seoul, Venice Beach, and Hollywood using the Fujinon XF 16-55mmF2.8 R LM WR, which we reviewed earlier this year, and the Fujinon XF 50-140mmF2.8 R LM OIS WR, which we will review later on. 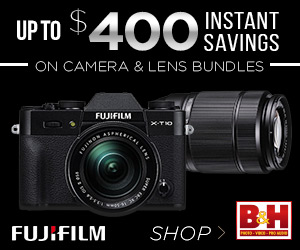