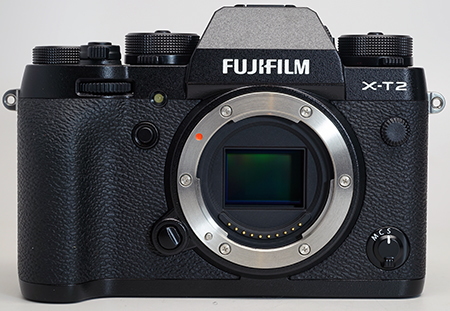 Here the X-T2 is shown with the 18-55mm f/2.8-4 OIS lens that is available for the camera or with the camera as part of the kit. The lens offers full zoom, focus and aperture control with three separate lens rings; fitting nicely with the complete on-body control that the camera offers.
Assisting with your low-light photography is the included but not built-in flash unit. Fitting on the hot shoe, but not having its own battery power, the included EF-X8 flash is the equivalent of a built-in flash. Taking its power from the camera battery, it will be a little slower and far less powerful than a powered external flash unit, but can be very helpful in a bind when shooting up close or using as a fill.
Fuji has upgraded the optical viewfinder as well, giving it 2.36-million dots of resolution, making it twice as bright as before and giving it a refresh rate of up to 100fps. This makes it a pleasure to shoot with, giving you a realistic representation of an optical viewfinder with the benefits of all of your shooting information and exposure changes live of the display. At the bottom of the EVF is the eye sensor, which when turned on, automatically enables the EVF and turns off the LCD when the camera is raised to your eye to shoot.
Above the EVF is the hot shoe for the included flash as well as any other accessory that connects to the camera to use power, including other external powered flash units and external microphones. You can also see the doptric adjustment for the EVF, just left of the hot shoe.
Your other option for composing and viewing your images is the 3.0-inch, 1.04-million dot LCD screen. This LCD screen is capable of tilting in two directions, allowing it to be useful in a variety of difficult shooting conditions, both vertically and horizontally. While it is more useful than some LCD screens that only tilt one way, it still falls a little short of the Vari-Angle LCD's that can adjust to almost any angle.
On top of the camera on the left side you will find the ISO control dial, just like you would find on an old film rangefinder. In the center is a button that locks the dial in place, so there is no accidental rotation of the dial. Underneath the dial is a ring that changes the drive mode of the camera. Here you will find BKT, burst, double exposure modes and more. Under the dial you can see the delete and playback buttons.
The right side shows two more control dials, one for the shutter speed and one for the exposure compensation. Under the shutter speed dial are the camera's metering mode options. The dial also features the same lock button as the ISO dial. In the middle you will find the shutter release coupled by the power switch and the Fn button.
Not pictured are the second command dial, Fn button and AF mode selector that are spread across the front of the camera and can be seen on the top image.
On the back, the controls are a little simpler than expected due to so much control on the top. At the top you have the Auto Exposure and Focus lock buttons, command dial, Quick menu button, focus stick, 4-way controller/Menu button and the DISP/Back buttons. The 4-way controller buttons are considered Fn buttons, allowing them to be programmed to your choosing.
One the left side of the camera you will find several I/O (input/output) ports. From top to bottom you have the Microphone jack, high speed USB 3.0 port, HDMI port and the remote release jack.
Storing your images and videos is accomplished with SD/SDHC/SDXC style memory cards. Fuji has equipped the camera with dual card slots, giving you the ability to keep the camera loaded with memory. This is fantastic with the camera's high speed burst shooting and more specifically, the 4K video capture. It works with both UHS-1 and UHS-2 cards, and the faster the card the better. A UHS-3 speed card is recommended by Fuji for video recording. The camera is shown here with the Fujifilm Elite Performance 8GB UHS-1 SDHC memory card that was used to test the camera.
Powering the camera is a 7.2V, 1260mAh rechargeable Li-Ion battery. This battery is capable of providing the camera with enough power to capture 340 still images on a single charge in standard shooting mode. Burst shooting will enable more images, viewing images and recording video will greatly reduce the battery life. Also included with the camera is a compact, portable battery charger, making it easy to keep your battery and a couple spares charged and ready to go at all times.
Designed specifically for the X-T2, the optional Vertical Power Booster Grip VPB-XT2 can add two additional batteries to the camera, increasing the number of still images it can capture to nearly 1000. Several on-board controls and a charging feature add some additional usability by adding vertical comfort and control. The charging feature lets you charge the two inserted batteries in just two hours.