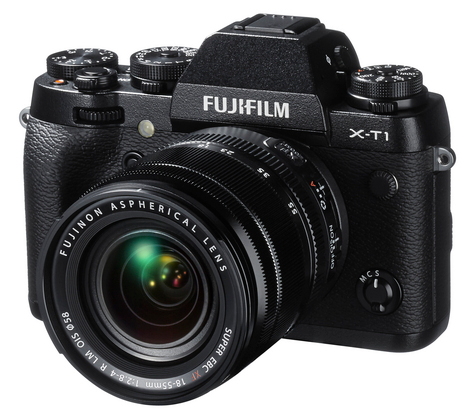 When Fujifilm released the original X-T1 in 2014, we were very impressed with its classic combination of dials and buttons, outstanding feature set, great image quality, and one of the best electronic viewfinders available on the market. The price was a little high, but understandable for a powerful mirrorless ILC.
For 2015 Fujifilm has taken the X-T1 and added infrared capabilities. Dubbed the X-T1 IR, this upgraded model offers all of the same great features as the original model (more on this below), but adds a new sensor cable of detecting light from the ultraviolet (UV), visible, and infrared (IR) portions of the light spectrum. That's 380nm - 1,000nm for those who paid attention in various high school science courses.
In other words, the Fujifilm X-T1 IR was designed with professionals in mind. Crime Scene Investigators. Fine art photographers. Healthcare diagnosticians. Basically, if it's your job to uncover hidden details invisible to the human eye, you might want to consider this mirrorless ILC.
Aside from the new advanced infrared technology, the X-T1 IR is otherwise the same as the original X-T1. Here's a revised version of what we said for that model:
Fujifilm has announced an ILC that might be the perfect fit for imperfect weather conditions. Sure, the X-T1 IR boasts a 16.3-megapixel APS-C sized CMOS II image sensor and works with a ton of X-series lenses, but it also has 75 points of weather sealing to make the camera dust and water resistant, and also freezeproof down to -14°F. Not to mention that its 3.0-inch tilting LCD screen (with 1.04million dots) is made of tempered glass. Pretty cool, right?
The other big bonus is the included EXR Processor II which, when combined the X-Trans CMOS II image sensor, boasts the world's fastest AutoFocus (AF) time of just 0.08 seconds. The X-T1 also starts up in 0.5 seconds, has a shutter time lag of only 0.05 seconds, and a shooting interval of a half second. Speaking of speed, the X-T1 can shoot up to 8 frames per second (fps) with phase detection AF engaged, and just so happens to be the first ever camera to be compatible with the SDXC UHS-II format memory cards, which can write data twice as fast as a conventional SD memory card.
The X-T1 IR also has a 2.36-million dot OLED EVF (Electronic Viewfinder) that has not one, but four different display modes. These include FULL (which uses the camera's 0.77x magnification ratio to show the whole scene), NORMAL (which display an optimum scene view as well as shooting settings), DUAL (which splits the view for manual focusing that's checked by Digital Split Image or Focus Peak Highlight technology), and PORTRAIT (which automatically rotates displayed information if the camera is held vertically in Normal or Full modes).
Finally, the X-T1 IR boasts one-touch Wi-Fi connectivity, which allows you to connect the ILC to a smartphone or tablet running the free FujiFilm Camera Remote app. As the name implies, you can control the X-T1 IR directly from your smart device, or transfer and share images to the web.
Fujifilm X-T1 IR Features
The Fujifilm X-T1 IR (Infrared) will be available in October (2015) for $1,699.95 USD. The press release wasn't specific, but that's likely the body-only price since the original X-T1 can be purchased in kit form for about the same price.
What's in the box?