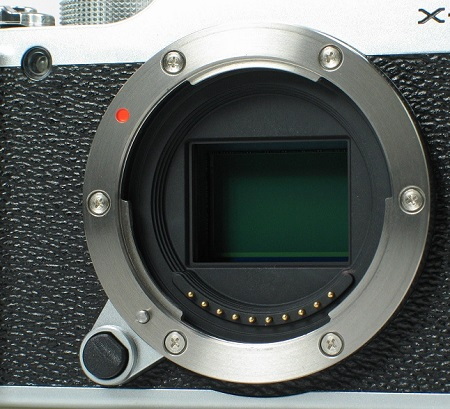 The interchangeable lens mount included with the X-M1 is a Fujifilm X mount, allowing this camera to use any X lenses. The lens release button is at the lower left area of the lens mount.
Fujifilm has included a large APS-C sized image sensor with the X-M1 (23.6 x 15.6 mm), which is an image sensor that's similar in size to what you would find on a DSLR camera. It's not quite as large as the 35 mm full frame image sensors some advanced cameras contain, but APS-C sized sensors are among the largest in the marketplace.
Fujifilm's Ultra Sonic Vibration sensor cleaning system is included too. The X-M1's CMOS image sensor includes 16.3-megapixels of resolution.
You'll have several through the lens focus options with the X-M1, including manual focus, area AF, multi AF, continuous AF, and tracking AF.
ISO settings between 100 and 6400 are available with standard sensitivity, while you can advance the ISO to 12,800 and 25,600 with Fujifilm's extended output sensitivity.
Several X mount lenses are available for use with the X-M1, including a recently released 55-200 mm lens, so you'll have quite a bit of flexibility with this camera through the various interchangeable lenses.

With the model I tested, Fujifilm included a 16-50 mm X mount kit lens (24-76mm equivalent to 35mm format). The focal lengths are printed on the lens, and as you turn the zoom ring the current focal length is indicated by the number closest to the white vertical line on the inner ring. You'll need to use the printed numbers on the lens to determine the focal length as there is no correlating number displayed on the camera's screen.
This X mount lens also includes a manual focus ring at the far end of the lens.
The popup flash unit for the X-M1 is on the far left side of the top panel of the camera (as you're holding the camera). The flash unit will pop upward and outward a little more than 1 inch when you press the flash button, which is located on the upper left area of the back panel. To close the flash, you just press on it until it collapses back into its compartment along the top panel of the camera.
Having this flash unit extended away from the camera body allows the flash to perform well without having to worry about problems with vignetting from the lenses, which extend a few inches beyond the X-M1's body.
The combination of the large CMOS image sensor and the extended flash provide the X-M1 with some excellent low light performance levels. The popup flash can synchronize at a speed as fast as 1/160th of a second.
You can see the flash button and flash compartment in this image of the back of the camera. To the right of the flash button, you'll also see a hot shoe, through which you can connect a few different accessories, including an external flash unit, which should provide a bit more flash power versus the popup flash.
To disable the popup flash unit, just close the flash compartment or turn off the flash in the on-screen menus. If the flash compartment is closed, the on-screen menus will be disabled for the flash commands.
You again can see the hot shoe along the left side of this image of the top panel of the X-M1 camera body. On the far right you can see the command dial, which is unmarked and allows you to scroll through on-screen menus and commands more quickly than you can using the four-way button.
Just below and to the left of the silver command dial in this photo is a smaller unmarked sub-command dial (in black) that's aligned with the back panel of the camera and is just visible here. This sub-command dial allows you to make changes to the shutter speed or aperture while in a manual control shooting mode. In certain shooting modes, the sub-command dial also can be pressed downward to allow you to do a "quick zoom" into a scene for more precise manual focus.
The black Fn button is above the main command dial. From any shooting mode, you can press the Fn button to gain access to a particular command that you can assign through the on-screen menus. In other words, you can customize the Fn button to give you one-touch access to a command that you pick while in a shooting mode. While you're in Playback mode, you can use the Fn button to gain access to the Wi-Fi capabilities of the X-M1.
To the left of the silver command dial is the shutter button, which is surrounded by the X-M1's power switch. The shutter button is a little smaller than I'd like to see, but its size doesn't cause any significant problems. In fact all of the X-M1's buttons are of a good size to be used comfortably.
Fujifilm included an extensive mode dial with this camera, giving you access to 12 options.

Fujifilm included a standard set of command buttons along the right side of the back panel of the camera. Along the top of the right side of the back panel is an area with raised bumps for your thumb, making it easy to grip the camera.
Just below the thumb grip is the Playback button, through which you can see the images you've already shot that are stored on the memory card. Once you're in Playback mode you can gain access to the Playback menu through the Menu button.
To the right of the Playback button is the Movie Record button. Press this button to start and stop video recording.
The four-way buttons provide the ability to gain access to certain popup menus or to maneuver through the camera's menus. The upper four-way button controls the focus modes, the left button controls the macro mode, the lower button controls burst modes, and the right button controls white balance. The Menu/OK button in the center opens the camera's main shooting menu and the setup menu, and it also serves to make selections.
Along the bottom of the panel is the Disp/Back button, which allows you to change the look of what's displayed on the screen. When working through the on-screen menus, you can use this button to back out of the menus.
In the lower right corner is the Q button, and this is one of the best buttons on the camera. By pressing the Q button, you can gain access to a Quick Menu grid that shows all of the different settings that are available on the camera, such as ISO, resolution, sharpness, etc. This is the fastest way to gain access to these settings.
The X-M1's 3.0-inch LCD screen is a high-resolution display, offering 920,000 pixels of resolution.

You can tilt the LCD screen to help with screen glare, which can be a significant problem with the X-M1 when shooting outdoors.

The X-M1's LCD screen can tilt up to 90 degrees to the camera body in either direction, as shown here. This is a nice feature for making it easier to use the X-M1 on a tripod. You can stand upright and view the tilted screen, rather than having to stoop over to see it.


There are two ports on the Fujifilm X-M1 -- an HDMI slot and a USB slot. The ports are hidden behind a compartment on the right-hand side of the camera body. The compartment has a flexible hinge, and it snaps securely into place.
Unfortunately, Fujifilm chose to not include a USB cable with this camera, which is an odd choice. You'll either have to find an old USB cable that fits the X-M1's port or you have to purchase one separately.

The bottom panel of the X-M1 includes a compartment that holds the battery and SD memory card slot. The panel has a sturdy hinge and is locked in place with a latch. This camera contains a pretty thick battery, which allows it to shoot up to 350 frames per charge, according to the manufacturer. I thought Fujifilm's estimates were pretty accurate, and my tests showed you easily can expect more than 300 photos per charge during normal shooting modes.
Fujifilm included a separate battery charger with this model, which is a great feature for those who want to purchase a second battery. You then can have one battery charging while using the second battery, which is preferable to a model where you must charge the battery in the camera, leaving the camera inoperable during that time.