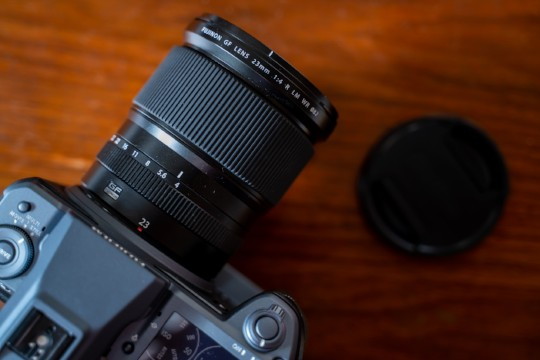 What We Like. If your first impression with this lens is that it’s nothing special, don’t fret. We thought as much, especially with that slow maximum aperture. But, give it a chance, and this 18mm F/3 full frame 35mm equivalent lens will actually pleasantly surprise you with its solid image quality and extensive weather sealing. And while it is big, bulky and heavy, it actually handles effortlessly with that rubberized focus ring and an aperture ring that we’ve always appreciated coming from this reviewer’s film photography background. The Fujinon GF23mm F/4 R LM WR also fills that wide-angle gap in Fuji’s medium format category, which should please many GFX users, especially those who shoot landscapes, architecture and travel photography. To round it all out, Fujifilm made sure to arm with elements that suppress common optical issues like distortion, ghosting and flare, and fringing, so that the images you take with this glass aren’t just very sharp, but also impeccably clean as well.

What We’d Change. The most glaring issue we have with this lens is that its autofocus is nothing to write home about. Fujifilm GFX 100, the body on which we mounted the Fujinon GF23mm F/4 R LM WR for testing, already comes with its share of AF limitations, without the lens adding to the focusing troubles we had when shooting in low lighting situations. And, it doesn’t take a lot to cause it – put your subject’s face in shadow, even when you’re shooting in the middle of the afternoon, and you’ll find yourself needing to nudge the whole thing in the right direction. It doesn’t help that this lens is already pretty slow with its maximum aperture of F/4. If you’re mostly shooting landscapes, then this probably wouldn’t be a huge issue; but for everything else, you’ll find it a tad limiting on your creative process. Design-wise, it would have been better if Fuji made it feel more balanced when mounted on the GFX 100. As it is right now, it feels front-heavy even on such an already massive and heavy body.

Pick This Up If… you’re already invested in Fuji’s medium format line-up. This might just be the wide-angle prime lens you’ve been asking the manufacturer for – especially if you shoot a lot of landscapes, architecture, street scenes and travel photos.

The Fujinon GF23mm F/4 R LM WR is one of those very few lenses with the ability to surprise you. As far as first impressions go, it might not look like much – though it certainly feels like it with that hefty 1.86-pound weight and 3.5-inch diameter – but you’ll be more than happy with the photos it produces. That is, once you’ve had a chance to look at them on a much bigger screen.

It’s far from perfect, and there are several areas here that Fuji could have done better – most notably, its autofocusing performance in low light. However, rest assured you’ll be taking home impressive images thanks to it.

We shot with the FUJINON GF 23mm F4 R LM WR while testing the Fujifilm GFX 100 Medium Format Mirrorless Camera, which we will be reviewing soon as well. For the long exposure shots, we used our old but still trusty Manfrotto BeFree tripod.

The Fujinon GF23mm F/4 R LM WR certainly feels excellently constructed, with its metal (or metal-like) barrel that has a semi-glossy finish furnished with a ribbed rubber focus ring, a petal hood that clicks in place and requires a push of a button to be released, and, true to Fuji form, an aperture ring.

What’s most remarkable about this lens’ build, however, is its weather sealing, which is in line with the fact that this is a lens for landscape photography. You’ll be able to take this lens out on the field without worry because it boasts nine areas of weather sealing, covering the area around the front element and the mount, as well as its moving parts, in order to protect it from dirt, dust and moisture.

According to Fuji, it’s also able to withstand up to -10°C in cold weather. Now, 33.8°F may not be much when talking about true rugged build, but it’s still something.

We weren’t able to test that part, nor were we able to test it in the rain, so we’ll have to take Fuji’s word for it. However, we did take this lens out to shoot in dusty, over 100°F weather out in the desert, and we’re happy to report that it performed without a hitch.

Let’s just get this out of the way: the Fujinon GF23mm F/4 R LM WR is undoubtedly big and even more noticeably heavy, especially for a prime lens. It weighs 1.86lbs, after all, and is 4.1 inches long and 3.5 inches wide. To somehow put that into perspective, Sony’s widest E-mount prime, the Sony FE 24mm F1.4 GM, is around half its weight, about an inch shorter and half an inch thinner.

Considering, however, that the GF23mm F/4 R LM WR is designed for Fuji’s medium format bodies, it’s hardly a surprise that it’s massive and heavy. Lugging around a heavy camera rig is something you’ll have to live with – and thus, eventually get used to ­– when you’re shooting digital medium format. We only wish that Fuji designed it better so that it doesn’t feel front-heavy when mounted on the Fujifilm GFX 100. As it is now, it tilts the already big and heavy body forward when you set the whole thing down on a flat surface.

The focus ring close to the front element is ribbed so you can easily feel for it when you’re looking through the viewfinder. And, it offers a good combination of resistance and smooth rotation.

On the other hand, the aperture ring, which sits closer to the lens mount, is prone to accidental turning. It has a locking mechanism when set to A (auto) and C (command dial mode), but the individual apertures don’t. The ring itself doesn’t have enough resistance, so expect unintentional turns to happen and to happen often. You’d want to make the habit of double-checking the aperture before pressing that shutter button.

And so, we get to the Fujinon GF23mm F/4 R LM WR’s biggest shortcoming.

That’s not to say that its general autofocusing performance is bad – Fuji fitted this lens with an inner focusing AF system and a linear motor for a quiet, smooth and largely accurate autofocus. Mounted on a medium format, we never expected it to be fast enough to keep up with moving subjects, but its performance more than meets our expectations when working with ample lighting.

However, you should also expect to switch to Single point AF and give this lens a helping hand when you’re working in low lighting situations. And, it doesn’t take much either. Even in broad daylight, we found its Face Detection and EyeAF acting completely bewildered when trying to detect and track a person’s face when it’s in shadow.

Here’s another piece of good news to make you feel better about this lens though: it’s got a minimum focus distance of 38cm or 14.9 inches and a 0.09x maximum magnification so that you can get decent detail shots (or wacky-looking portrait shots, if you’re into those).

Working with a maximum aperture of F/4 and a wide focal length, unfortunately you wouldn’t be able to expect a lot of creamy, dreamy bokeh and blending backgrounds. However, that more than decent minimum focusing distance does help in producing a more than decent depth of field as well as nicely rounded bokeh balls – even if, in most situations, you’d have to zoom in to really appreciate them.

The first photos we took with the Fujinon GF23mm F/4 R LM WR on the Fujifilm GFX 100 are of the Milky Way over Anza Borrego, and we could not help but be impressed when we saw the images on our laptop display. There’s no doubt about it: this lens produces great image quality, especially on the Fuji’s latest medium format body.

Fuji has promised “high-resolution performance extending all the way to the edges” with this lens, and while that claim is far too lofty, this lens does deliver impressive sharpness especially at F/8. It’s at this aperture where the GF23mm F/4 R LM WR boasts sharpness throughout the entire frame – from the center all the way to the edges. There’s some softness at widest and narrowest, albeit only marginal, but you’re better off going with F/8 to F/16 when shooting landscape scenes rather than F/22 to F/32.

Bear in mind also that this is a slow lens, so when shooting in low even at its widest aperture, there’s a good chance that handholding the camera won’t work so well for you, even if you’ve got the steadiest hands. There’s also a bit of vignetting from F/4 to F/5.6.

However, to make up those, the Fujinon GF23mm F/4 R LM WR does produce really clean images. Its Nano GI coating is very effective at reducing ghosting and flare, while its Super ED and three ED elements really minimize purple fringing. We’ve found tiny amounts of chromatic aberration, but you’d have to really zoom in to spot them, which kind of makes them negligible.

In all, this is a fantastic lens that produces sharp and clean images, so you’ll spend even less time ‘fixing’ them in post.

So now that we’ve spelled out all its features and flaws, the question we’re left asking is, is the Fujinon GF23mm F/4 R LM WR a lens worth investing in? After all, there’s still the matter of its extravagant $2,599 price tag that most shooters would have to save a few months to pay for.

However, there are a small number of things here that Fuji could have done better, starting with that autofocusing system that falters in low lighting situations, and depending on who you ask, it might be a deal-breaker considering the price.

If you’re already invested in Fuji’s medium format system and you shoot a lot of landscapes or architecture photos, the Fujinon GF23mm F/4 R LM WR hits that sweet wide-angle prime spot you’ve probably been missing. However, if that isn’t an itch you need scratched, this lens isn’t a necessity in your camera bag.