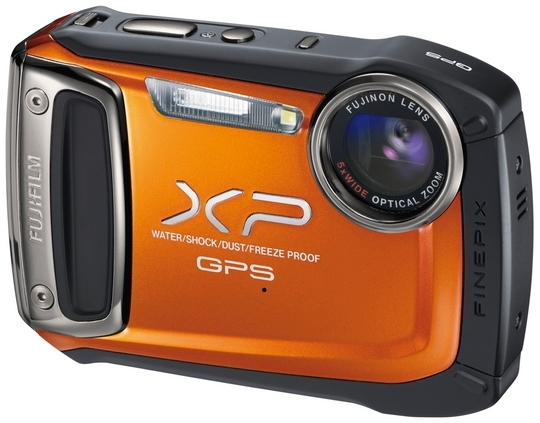 Fujifilm just announced three new models in its "lifeproof" FinePix XP series, the XP150, XP100, and XP50. Lifeproof cameras are rugged versions of point and shoot digicams with Waterproof, Shockproof, Freezeproof, and Dustproof capabilities built right in. Fujifilm's new XP Series cameras now all include a high performance 14 Megapixel CMOS sensor coupled with a FUJINON 5x wide angle optical zoom lens (28-140mm) with a water repellent coating. The XP Series all have a new, high-contrast 2.7" LCD to help see what you're shooting in bright sunlight or underwater.
All three cameras also feature full 1080p HD movie recording modes, 10 frames-per-second burst shooting capabilities in full resolution, and a newly redesigned double locking door to keep all the electronics housed in the rugged, metal uni-body chassis safe from whatever elements you may throw their way. To help with capturing crisp images and smooth video during any adventure, Fujifilm has included sensor shift Dual Image Stabilization (CIS) system as well as in-camera movie editing, Motion Panorama Mode, Face Detection and Automatic Red-eye removal.
So why purchase an XP150?
Well, the XP150 is the XP-Series Flagship. It costs about $30 more than the similarly-appointed XP100 and comes with one extra feature: built-in GPS. GPS is useful for GEO-Tagging (every time you snap a picture, you can let the XP150 record your location in the world, and then when you load it into a social networking site, web app like Google maps, or photo editing/viewing programs, you'll be able to see where you've been) and there's even an Electronic compass to help lead you out of the backcountry should you become lost.
Also, both the XP150 and XP100 sport tougher specs than the series' most affordable model, the XP50. These upgrades include being waterproof down to 33ft (10M), shockproof to 6.5ft (2M), freezeproof to 14 degrees F (-10 degrees C), and a longer-lasting Li-ion Rechargeable battery (330 shots vs. 220 shots).
The only real drawback with this model, other than being the most expensive, is that it's only available in two colors, where as the XP100 and XP50 are available in five.
Fujifilm FinePix XP150 Features:
Fujifilm's flagship XP-Series camera, the FinePix XP150, will be available March 2012 for $279.95 USD in black and orange.