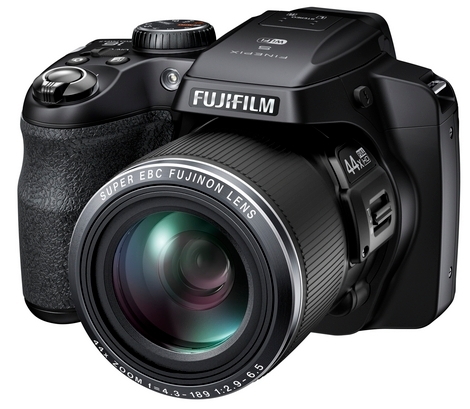 Fujifilm has announced the FinePix S8400W, its latest all-in-one "bridge camera". The 16-megapixel BSI CMOS image sensor, 3.0-inch LCD display, and 1080/60i HD video recording are nice features, but the real highlight here is the extremely long 44x optical zoom (35mm equivalent of 24-1056mm), which should handle all shooting needs near and far. Optical Image Stabilization is included to smooth out extreme telephoto scenarios, but the S8400W is also capable of handling super macro shots as close as 0.39-inches.
Built-in Wi-Fi, when used with Fufjilm's smart phone app or PC Auto Save, allows owners to back up photo, or share them on their favorite social networking sites. If you like a little extra pop in your pictures, try the Artistic Effects, which include Pop Color, Toy Camera, Miniature, Cross Screen, or Soft Focus.
Fujifilm FinePix S8400W Features
Fujifilm FinePix S8400W will be available in May (2013) with a $349.95 MSRP
Additional Product View