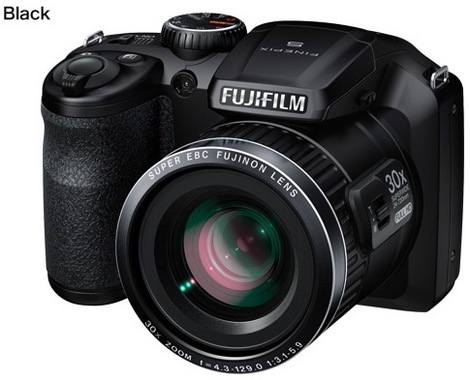 Fujifilm has announced two new long zoom S-Series digital cameras with 30x optical zoom lenses, 16 megapixel image sensors, HD video recording, 3.0-inch LCD displays, full manual exposure controls (P/S/A/M), and the ability to run on four AA batteries.
So then, if so similarly appointed, why does the dSLR-inspired FinePix S6800 cost about $20 more than the also-announced S4800?
Simple, in addition to Super Macro mode, the S6800 has a CMOS image sensor, which is capable of recording higher resolution 1080/60i HD video. CMOS sensors are also faster -- the S800 has a number of continuous shooting and slow-motion video recording modes -- and more capable in low-light shooting conditions. On the other hand, the S4800 is limited to 720p HD video by its CCD image sensor.
We'll have to review these two models to fully tell, but on the surface it appears that this $20 upgrade is well worth it.
Fujifilm FinePix S6800 Features
With red, black, or white color options, the Fujifilm FinePix S6800 will be available in March (2013) with a $249.95 MSRP.
Additional Product Views