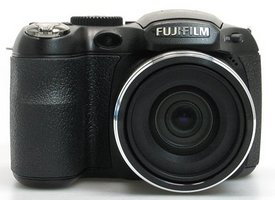 Building on their "S" series of powerful FinePix models, Fuji has released two new models, the S1800 and S2550HD. I want to note that these cameras are identical, with only a single difference between them; a HDMI port. That's right, same exact camera, but one has HD video output. These models are the successors to the S1500 we reviewed last year, offering the same "dSLR" like body configuration, with a nice large handgrip for a secure hold on the camera, along with various controls mounted across the frame. The S1800/S2550HD includes many improvements over the S1500, including increased resolution at 12-megapixels, an 18x Fujinon optical zoom lens, a larger 3.0-inch LCD screen, 720p HD video option, and a few additional scene mode options. Features that have been carried over are AA power source, SD/SDHC memory card compatibility, a 0.2-inch EVF, etc.

Like I mentioned earlier, the S2550 has a comfortable handgrip and control layout. I found each button/control was well labeled and easy to reach with my finger tips. I especially like the zoom controls mounted around the shutter release. The exterior seems very well build, with a pleasing texture on the grip and back. The S2550 offers both an EVF (Electronic ViewFinder) and 3.0-inch LCD for framing and viewing images as well as navigating the menu system. They offer a live view with either a 30 or 60fps refresh rate. The EVF is quite small, making it hard to use at times, especially in bright conditions (which is where you would normally want to use an EVF over the LCD). Like all units of this type, it offers some advantages and disadvantages. While you have the ability to review images, see all exposure information, grids lines, and menus, the display will black out briefly during burst mode capture, etc. Both displays were usable in a variety of lighting conditions. When shooting outdoors the LCD's surface is very reflective. However, the live image is bright enough that you can still see your subject. Using the EVF would normally be the better choice here, however because the eyepiece is so small, you still get a good amount of ambient light. Indoors both displays get a bit noisy. I say noisy instead of "grainy", as it looks more like chroma (color) noise compared the the typical "fuzz" or grain that we see.

The most noticeable feature on the S1800/S2550 is the Fujinon 18x optical zoom lens. This unit offers a versatile zoom range of 28 - 504mm (in 35mm equivalence). This means you will be able to capture a wide range of subjects, both indoors and out. The 28mm wide angle extreme is great for indoors snaps shots, group photos, vast landscapes, etc. While on the opposite, telephoto end of the zoom, you have the magnification needed to tightly frame a subject or bring distant objects up close. While the zoom is not continuous, I counted 19 steps from wide angle to telephoto. This should allow for accurate zooming, without having to use your feet much. Overall I noticed moderate barrel distortion at the wide end, but only slight pincushioning at the telephoto end. Small traces of chromatic aberrations (aka CA or purple fringing) were present in most of our outdoor samples. I also noticed that the camera's Dual IS system didn't perform to well when using the telephoto end of the zoom handheld. I've got a pretty steady hand, and all of our full telephoto (handheld) shots are a bit soft; especially when compared to other super-zoom models I've tested over the years.

The S2550HD's shooting performance has improved slightly over past models. From power-on until the first image is captured takes between 3.5 and 4 seconds. Shutter delay, the time elapsed between pressing the shutter and capturing an image, was about 1/10 of a second when pre-focused, and anywhere from 3/10 - 8/10 of a second including autofocus time, depending on the amount of focus change. The Shot to shot delay has improved a bit, averaging 1.9 seconds between frames without flash, and between 3.5 - 4 seconds with flash. While this is an appreciated advancement, I will note that you can only capture about 3 frames at this speed before the buffer fills when using SR Auto mode, which then slows the camera significantly. I believe this is due to the added in-camera processing that takes place when using SR Auto. Like past models, I found was that the LCD/EVF blacks out in between shots, with or without using the flash, which is a critical time for framing the next shot.

When switching to Burst mode, the camera performed well. There are several continuous or burst capture modes to choose from: Top 3, Last 3, Long Period, Top-10 (6M) and Top-20 (3M). Top 3 allowed me to capture 3 frames in 1.4 seconds, about 2.1fps which surpassed Fuji's claim of 1.3fps. It then takes about 14 seconds for the camera to clear its buffer and shoot another set. Last 3 will continuously snap away at same frame rate, but only saves the last three images. Long-period continuous is limited only by available memory. It performed the same as Top 3 mode, capturing the first 3 images in just 1.4 seconds, then slowed to a sluggish one image every 3 seconds. Top-10 lowers the resolution to 6-megapixels, and allowed me to capture 10 frames in just 2.5 seconds, about 4.0fps. This was actually impressive, and even thought it's at a lower image size, 6-megapixels still has plenty of resolution to create large 13x19-inch prints. Top 20 drops to 3-megapixels, and captures 20 frames in just 1.8 seconds, about 11fps. Again, you still have a good amount of resolution that can create prints up to 8x10-inch without a problem. In all modes, the camera surpasses Fuji's claims, with the exception of Long-period. When using either of these modes, both the EVF and LCD blacked out briefly, then displayed the last image captured, making it difficult to follow a moving subject. Our tests were done using a SanDisk Ultra II 4GB SDHC card, 12M Fine quality, SR Auto mode, flash off, ISO Auto, and all other settings at default. Times may vary depending on lighting conditions, camera settings, media used, etc.

Reviewing our samples images from the S2550HD showed us that the camera is able to produce good exposures outdoors. Colors are pleasing to the eye, and images are sharp with only slight edge softness. I did notice that all of our photos lacked that fine detail we would like to see when viewing images at 100%, however they do look good when viewing them full screen on my Dell 24-inch Wide LCD monitor. One issue I had with this camera was when using Aperture priority mode. You have only two aperture options available, either wide open (small f number), or closed down (large f number). This means you can only use the maximums of the entire aperture range, which defeats the purpose of Av priority in my opinion; which is used to control DOF (Depth Of Field aka range of focus).

Image noise resembles what we saw with past models; levels that are higher than we would liked to see. Noise seems to be well controlled up to ISO 400, however even the lower 64 and 100 settings show some chroma noise present when critically viewing photos. At ISO 800, for some reason saturation jumps, producing an over-saturated image with visible noise at even 25%. As you increase the sensitivity, it just gets worse. I personally recommend keeping the ISO at 400 and below, only using ISO 800 sparingly. Anything above 800 is not usable in my opinion. Thankfully, like the S1500, the S2550 allows you to 'cap' the Auto ISO setting to either 400 or 800 when using P/A/S/M/C modes.

When shooting people photos, the SD2550 did Ok. I noticed that the camera had some white balance issues both indoors and out. You can see examples on our sample page where the camera would capture a photo with a green cast to it; which is not pleasing at all, especially for skin tones. The flash it a bit weak also, especially indoors, and only worked well for fill-in when shooting from less than 5-6 feet outdoors. Like we mentioned above, when viewing portraits at 100% I saw very little fine detail, however at full screen resolution the photos do look nice. While using SR Auto for most of our shooting, I found that the Face Detection system was able to find faces within 1-3 seconds from entering the frame. It wasn't the fastest system I've tested, but it was usable.

The S2550 allows to capture video at various resolution settings, with options for 1280x720, 640x480 or 320x240 @ 30fps with sound. Unlike many consumer point-n-shoot models, the S2550's 18x optical zoom can be used while you are recording movies. Our video results were a bit disappointing. The camera handles exposure well, however the autofocus system seemed to have trouble keeping my subjects in focus, our indoor videos show plenty of noise, and the microphone is extremely sensitive. In our two video clips, I didn't notice half of the background noise you hear in the video. Yes, bowling alleys are a bit loud, but the audio in our clips does not represent what I actually heard very well at all. When using the zoom, I found that the camera was able to quickly recover focus, which is a good thing.

Like past models, the S2550HD uses AA type batteries. Fuji claims that you can capture up 700 frames when using high-capacity NiMH cells. This is a pretty impressive claim, as most models in this class can capture 200-300 photos from 4 NiMH cells. I was able to capture 185 still photos, several short video clips, and complete all of our other tests with power to spare (the camera does not display a battery level indicator, so we are not sure how much power is left). Do I feel this camera could take 700 frames on a single set of NiMH cells?? In short, not likely.

Bottom line - FujiFilm's latest "S" series super-zoom is an improvement over past models. The camera can capture decent 12-megapixel images that are sure to make pleasing prints from 4x6-inch on up, and offers some blazing fast Burst mode options. However, it's overall image quality, ISO performance, and shot-to-shot times are not up to par with the rest of the competition. The SD2550HD and S1800 are some of the most affordable super-zoom models on the market with an 18x optical zoom, at about $249US or less. However, I strongly recommend you look at some of its more expensive competition, like the Canon PowerShot SX20 IS, Olympus SP-590 UZ, Panasonic Lumix DMC-FZ35 or the Casio EX-FH25 to name a few. While each cost an additional $100 or more, they offer superior control, image quality, and overall shooting performance.