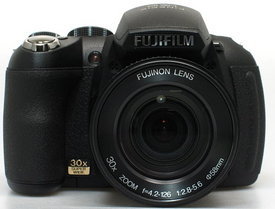 FujiFilm continues to create powerful super-zoom models, with their latest model being the FinePix HS10. This unit boasts some awesome features, from its 30x meag-zoom lens, 10-megapixel BSI (Back Side Illuminated) CMOS image sensor, full 1080p HD video recording, multi-frame technology, High-speed burst and movie modes (up to 10fps in still mode or 1000fps in video mode), a 3.0-inch tilting LCD screen, and much more.

What we would call a Prosumer model, the HS10 helps bridge the gap between consumer point-n-shoots and dSLR cameras. With dSLR like controls and size, the HS10 fits very nicely in your hands; even for those of us with large mitts. Whether you're a newbie, or a seasoned enthusiast, the HS10 has an exposure mode for you. SRAuto is perfect for beginners, as the camera will intelligently choose the perfect exposure and scene mode settings to help you capture pleasing photos in various situations. There are also 19 scene mode choices, including their advanced Pro Low-Light, Motion Capture, and Motion Remover settings. For those who like to control the cameras exposure options, you have Program AE, Aperture Priority, Shutter Speed Priority, and full Manual. These settings allow you to control as much of the exposure process as you are comfortable with. You can also create your own exposure mode with the Custom setting on the mode dial. All in all, the HS10 will allow anyone to explore their creative side, not matter what degree of photography experience they posses.

FujiFilm did a really nice job designing this camera. The build quality is top notch, and the vast controls mounted around the body are all in comfortable positions. The only acceptation to this is the EVF/LCD button, which is in a recessed location that can be harder to press with large, "fatter" fingers. The large hand grip is also quite comfortable, giving you a good hold on the camera. The manual zoom lens is also one of our favorite features of this camera, with allows for precise framing and zooming.

The HS10 has been equipped with a very nice 3.0-inch LCD screen that can also be tilted up and down for added versatility in framing. Fuji also included eye-level EVF (Electronic ViewFinder), which features a small "eye sensor" that switches the live view from the LCD to the EVF when you bring your face up to the eye piece. While this system works well, and the 3.0-inch LCD was a pleasure to use in most all lighting conditions, I was disappointed with the EVF. Not only is the eye piece uncomfortable, the viewfinder's magnification offers a very small view of your subject. Basically, you are looking at a tiny 0.2-inch LCD that looks tiny inside the viewfinder. This made using the EVF a last resort for me, and even in situations where the viewfinder would be my first choice (like outdoors in bright light), I chose the LCD instead. The 3.0-inch LCD has a nice bright live image, which helps make it usable in most lighting conditions. Indoors the display gets a little grainy, however this is quite typical. The surface is a bit reflective, however it never posed a problem with framing due to the camera's good brightness control.

The menu system was easy to navigate, and is organized in a familiar fashion if you've owned a FujiFilm digital camera in the past. One issue I have with the HS10's GUI was during playback. The extended information screen does not give you a whole lot of information, namely the exposure mode used. This can be frustrating at times, especially if you want to find out which mode you were using when you captured that awesome photo. While many can simply view the EXIF data later, many users do not know how to easily do this.

Shooting Performance from the HS10 is good for a mega-zoom camera. Power-up to first image captured measured between 2.7 - 3.0 seconds from flipping the power switch. Since the camera offers a manual zoom lens (no lens extension required by the camera), I would have though the camera started up a bit faster. However, this is still decent start-up speed. When the camera is pre-focused, the shutter lag is less than 1/10 of a second, but it jumps to 5/10 - 7/10 of a second when allowing the autofocus to work. In single shot mode, the time it takes the camera in between images (aka shot-to-shot delay) averaged about 2 seconds when shooting without the flash and 2.7 - 4.0 seconds when using the flash; depending on the degree of output from the flash. The HS10 also offers a high-speed Top 7 continuous shooting mode. Using it, I was able to capture 7 full-size images in just 6/10 of a second! That's approx. 11/7fps, which surpasses Fuji's claim of 10fps. The camera will only capture 7 JPEG frames then it will stop to process and save them. It then took the camera about 12 seconds to complete this action and be ready to capture another set.

Using RAW mode, the camera noticeably slows down. The shot-to-shot delay slows to about 3.9 frames between frames without the flash. Top 7 burst mode allows you to capture either 6 RAW images or 5 RAW+JPEG. Using RAW in Top 7 mode, I captured 6 frames in 0.9fps (6.7fps). It then took the camera 16 seconds to process and save these images. All of our tests were completed using a Lexar Pro 133x, 8GB SDHC memory card, Auto mode, Flash off, Preview on, ISO Auto and all other settings at the factory defaults, unless noted otherwise. All times may vary depending on lighting, camera settings, media, etc. When switching the camera to SRAuto, I saw no real performance slowdown. This was surprising considering most "Smart" Auto modes usually slow the model down due to the camera having to analyze the scene being framed.

Image quality from the HS10 is pretty good when you consider that even though this camera looks like a dSLR, it still uses a tiny 1/2.3-inch image sensor. Overall I was pleased with the photos produced from the HS10. It creates pleasing exposures in a variety of shooting conditions, and produces some very nice colors when using SRAuto. There were some instances where we saw that when using Program mode with the ISO at 800, photos displayed some very dull looking colors, as you can see from our shot of a young kid on his bicycle. I was also disappointed with noise levels from the HS10. When I first saw the specifications from this camera, I was excited to get my hands on it. I thought that since they chose to use a CMOS sensor with less resolution than you typical point-n-shoot with a 1/2.3-inch sensor, that the camera's high ISO noise and low-light capabilities would be better. However, that's not the case. Even at the lowest ISO 100 setting, there's a good amount of noise throughout photos. This also causes some detail loss, which reduces fine details in the photo. In my opinion, the HS10's maximum usable ISO setting is 800, which is typical. I would only recommend using ISO 1600 if you need to capture a good exposure, but are not concerned with quality. The 3200 and 6400 settings are not even worth trying.

When shooting photos of friends and family, the camera was able to quickly find and lock on to faces within the frame. The flash did well indoors, producing pleasing flash exposure when shooting from 10 feet or less using the zoom to tightly frame my subject. Facial features are relatively sharp, however due to increased noise levels, fine details are lost. When making small to mid sized prints, this will not be a problem. However, for those who are making a print from a tight crop or a large photo, it's likely that you will see some of this noise.

Like we mentioned earlier, the HS10 can record full, 1080p HD videos. This is only one of few Prosumer or "Bridge" cameras that can do this; Canon's PowerShot SX1 IS being another. While not HD camcorder quality, the movies from the HS10 are not too shabby. Playback is nice and clear with moderate noise, and the camera is able to refocus after you zoom rather quickly. Audio is decent, however like all digicams the mic is so sensitive it picks up a lot of background noise that you normally would not notice at the event. The only other thing I noticed while reviewing our clips was you can see distortion when the anti-shake or IS system kicks in. This is most noticeable when you look at the children's faces when the camera shakes a bit.

Another cool feature on the HS10 is the high-speed video mode options. In the past, Casio was the only manufacture to offer such robust video options. You can choose from six different speeds settings, which also changed the resolution depending on the frame rate. These choices are: 60fps (1280x720), 120fps (640x480), 240fps (442x332), 480fps (224x168), 1000fps (224x64). Each setting then plays back at 30fps, so you really need to watch the time when using the faster options, as a 3 second clip at 1000fps equals over a minute and a half of playback time. I truly enjoyed testing this setting, and feel that they are a great addition to this camera if you are one who needs the benefits of being able to record at these speeds. You can see examples of each option on our sample photos page.

Battery life was good for a model that uses 4 AA batteries. I was able to capture about 240+ photos, several short videos, and complete many of our other tests before having to swap in a fresh set of rechargeable NiMH cells. They claim you can capture up to 400 frames with NiMH, 700 frames with one-use lithium cells, and 300 with alkalines. The NiMH estimate seems accurate after working with this model, as our findings/numbers include excessive use of the menu and playback system, which lowers the number of photos we can capture.

Bottom line - FujiFilm has created a nice Porsumer or Bridge camera that is sure to please those looking for a camera that offers an amazing amount of versatility when compared to most point-n-shoot cameras on the market. While it can capture some nice 10-megapixel photos, they can not be compared to even entry-level dSLRs as far as quality is concerned. I feel that the FujiFilm FinePix HS10 will make a great camera for the hobbyist that is looking for a vast zoom range, and plenty of useful exposure options; not to mention a usable 1080p HD video option. With a street price of about $450, the HS10 offers a good value for the features and performance you are receiving.