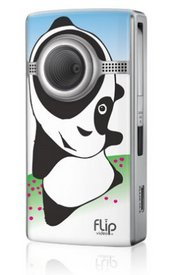 Cisco's Flip Video brand continues to improve their UltraHD line of compact and easy to use digital camcorders. The name or model numbers remain the same (somewhat confusing at times), and we saw very few changes to the latest UltraHD 8GB model, compared to the unit we tested last year. Overall it looks as though the screen resolution on the 2.0-inch LCD has dropped from 960x240 to 320x240, they've added image stabilization, the average bit bate has dropped slightly (8.8Mbps vs. 9.0Mbps), and battery life has taken a small hit; only 1.5 hours per charge compared to 2.5 on the previous model.

This compact, dedicated video camera is as simple as it gets when it comes to capturing 720P HD video. You can instantly record nice 1280x720 video at a fixed frame rate of 60fps by simply pressing the large red REC button on the back of the unit; there are no cables, menus or settings to worry about. You can choose from two models, the 4GB or the 8GB (tested), each sharing similar specifications less the built-in memory, and the 4GB unit does lose a few features; like image stabilization for example.

Build quality is pretty good, with the exterior consisting of a mostly plastic construction. While the UltraHD feels pretty durable, don't expect it to endure a ton of abuse; this isn't a "lifeproof" camera. Like past models, this unit is held vertically like you would hold a cell phone when taking a picture. The control layout and overall design is aimed towards one-handed shooting, which makes this a very convenient little pocket camcorder to have with you at all times. All of the controls are positioned in a comfortable manner, easily within reach of your thumb. It's design also accommodates both right and left handed users, which is a plus. The USB arm is located in a good position on the left hand side of the body, which allows you to "hang" the UltraHD from a USB port with good support of the weight; I had no fear of the camera possibly falling from the side of my Dell monitor. The 2.0-inch LCD is used for framing and viewing your stored videos. While resolution has dropped compared to its predecessor, I still found the display was able to produce a nice live image, even when in lower lighting. Outdoors the coating is a bit reflective, however the brightness of the LCD does help combat this. A brightness adjustment feature would have been nice to help ensure you don't run into any framing issues when outdoors in bright sunlight.

When you consider the size of the sensor and lens, the UltraHD produces some pretty nice 720p video. The faster frame rate of 60fps produces a nice smooth video with virtually no chop. Whether shooting in bright lighting outdoors or lower lighting like in our bowling alley clips, the camera captures nice crisp video. I did see some noise in our bowling alley clips, however it was minimal. In fact, indoor video from the UltraHD looks as good, if not better, than your typical digicam under the same conditions. Like we've found with most all digicams, the UltraHD's built-in microphone is very sensitive. You'll notice that It picks up a great deal of background noise, however it's faint enough in most cases not to cause any real headaches. One area that these flips lack in is zoom range. While some may not care to much about this, others will. I personally only recommend using optical zooming, however the UltraHD's digtial zoom option does work rather well. While you can see a decrease in video quality when using it, with only 2x magnification you don't see the drastic change in quality like you would from a compact digicam. You can see a zoom example on our samples page to judge the digital zoom for yourself.

While there may be not built-in menus to edit videos or capture still frames, Flip has included their handy FlipShare software, which is bundled directly on the camera's built-in memory. You simply plug the UltraHD into your PC or Mac to install the software (no CDs or DVDs needed), and you'll be on you way to organizing, uploading, and editing your videos in no time. In fact, it took less than 20 minutes to fully install the FlipShare software on my Windows 7 Ultimate (64bit) PC, and this included the time it took me to get some screen captures to show you the software on our Menu Screens and Software page. While you can't go crazy with editing, there are several useful options, such as saving single 1280x720 frames as a JPEG files from your videos, Trimming a clip, creating your own Movies or DVD, making your own Flip channel, or Uploading your creations directly to FaceBook, Twitter, Myspace, YouTube and much more. All in all, this is a very simple to use and handy little app, which will allow the most inexperienced user to share their movies with friends an family.

Bottom Line - Cisco has created an extremely easy to use compact digital camcorder that offers just what you need, and nothing more. The UltraHD is able to capture some nice clean 720p HD video at 60fps, which will be great for recording movies of your friends and family where a picture just isn't enough. However, just don't expect to get the same quality from this little unit as you would from a large digital camcorder. That said, with a suggested retail price of $199 US, the Flip Video UltraHD offers a good value when you consider the size and quality it has to offer. Just keep in mind that at the $200 price point, there are many compact digicams on the market that will offer video that is close the same quality, however they will also have the ability to snap high-resolution still photos and offer an optical zoom for the same amount of money.